My Sunday Thoughts: Osama, Me and Pornography

On a Sunday morning I open the Facebook and see what my friends have been doing during the last few hours. A string of updates cascade before me the exactly the way Della’s hair falls out of the clip before Jim in the Gift of Magi by O.Henry. And I find this posting by one of my friends that says the amount of pornographic materials captured by the US forces from the hide out of Bin Laden at Abbottabad.

It is interesting to imagine Bin Laden watching loads of pornographic stuff and falling over the retinue of wives in burqua waiting to be taken to bed.

This is the latest myth that the US distributes all over the world and the US know it for sure that it is a very palatable myth. Because anything blasphemous is covetable and often anything covetable would be blasphemous too.

That’s why one of my friends always says that the wife of another person looks so attractive, pretty, docile, obedient and worth taking around. Then I tell him all the time, the husband also must be thinking the same about others’ wives.

Thinking about others’ wives is blasphemous therefore desirable. And the world lives on in desire.

The US knows this. The US knows the power of this image, Bin Laden watching pornography and its moral repercussions on both the Muslim and the non-Muslim world.

The United States of America knows that if Bin Laden’s image is not trivialized and tarnished in all the possible ways, he would be raised into the status of a freedom fighter and martyr, slowly, steadily and in a fast changing world, a war would be fought not for Islam but for Osama Bin Laden.

I am not a fan of Bin Laden. If you ask me, the assassination of Bin Laden is justifiable and justified, I would say yes. But that does not mean that I approve of what the US does all over the world.

America is a place where you find a lot of pornographic activities. I have seen videos in which black and brown women having sex performance with hundreds of men who stand in a line, and she takes break only for peeing. You could do anything with her bodily openings, I mean wherever possible.

The story does not end there. The documentary goes on to tell the life of these women after this performance. They go back to their homes in black ghettos or in some Asian country. They break down before their parents.

This is pornography with a different touch. I met Anne Sprinkle there. It all happened when I was at Goldsmiths College in London. I was studying there and the fabulous library there opened a different world for me. During my 365 lonely days I poured myself over the books and visual materials.

I will not say who is Anne Sprinkle. You find it for yourself.

Pornography moved from cave walls and vase paintings to the private rooms of the rich and the affluent when photography was invented. The history of photography has a lot to do with the history of modern pornography.

In MS University, Baroda, there used to be pornography screenings on every Saturday night in the common rooms of the hostels, where hopeless boys gathered around the television set to watch the great feats of sex machines. Then they went back to their bed bug infested rooms and turned to the dirt covered walls, and within the unwashed blankets they satisfied themselves imagining that they were the real sex machines. 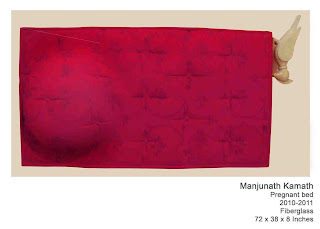 My friend Manjunath Kamath recently did a sculpture titled ‘Pregnant Bed’. His explanation is this: if your sexual act with a woman could make her pregnant, what about those innumerable beds that see sexual acts without a woman for company. The bed would be pregnant!

I was one of those hopeless boys.

Same year I too bought a computer. Download speed was too low. The moment my wife went out of home, I logged on to sites that gave me pornographic pleasure.

George Bush also might have done this when internet was introduced to him. All the Pentagon guys must be logging on to real stuff when they have some time off from their global surveillance duties.

In 2000-2001, I worked as a senior correspondent with one of the major online publications in India, which later became a print magazine. During the night shifts, irrespective of gender, every one watched pornography there. I have seen respectable ladies doing the same there. They told me they did it because there was a special page on ‘erotica’ to be produced. They were doing their research.

They had not read Susan Sontag.

I know my friends moving around with external hard disks full of pornographic stuff. They share it to interested parties who also carry around high capacity pen drives to collect anything.

Respected artists in our country, if there is an American raid on their private lap tops and PCs, would be condemned for collecting huge amount of pornographic stuff.

We live in pornography.

Watching pornography will not reduce a man’s integrity though it could make him look a bit funny.

And that’s what the US wants: Osama Bin Laden was a funny man.
Posted by JohnyML at 8:23 AM

Interesting insights there. Off course mine wont be that profound yet wud like to add that Indian voyeuristics are now comparable with those of the US statistics. The population does show (pun intended)