New Words and New Troubles: To My Children 5 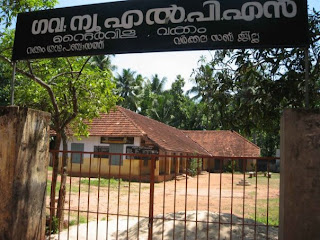 (The Writer Vila Primary School, where I spent five years)

Wow..loved your free flowing words. Life brings forth varied experiences before us. You studied in Kerala and your blog beautifully reflects your sentiments and state of mind in those days.

....the real life recollection is not just heart touching but awe inspiring.

the neck-tie with bathroom slipper tells of a time I recognise :)
was remembering my own crazy reading times... read almost all Sarat Chandra Chattopadhaya and Bankim Chandra and lots of other adult novels before I finished 8th standard :)

so nice......,now i can see my class mates, teachers,especially one Narayani Teacher,who always wanted me to cut my long hair,in my primary school "Karuvayil Bhagam LP school, Cherthala.several days i cried and complained to my parents,now i realised that she was correct,because for an LP school student short hair cut is good.And also i feel the smell of that lunch, which i had to taste only on Oct.2(sevana varam),on that day i gained permission from my mother after a strong argument.thank u so much Johny,for this recollection of sweet memories.......