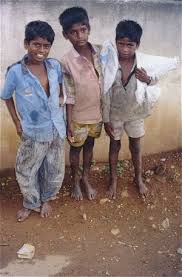 (pics for representative purpose only)

This is the story of a boy whose name is Munna. I hardly know him but I know his name because I have heard his friends calling him by that name.

I live in South Delhi. As you know the south side of any city is rich in any part of the world. But that does not mean that South Delhi is full of ‘only rich’ people. You could say it is ‘for rich people only’. Even if it is only for them, the rich people have a problem; they cannot live without poor people around. There are two reasons for this.

I heard Munna telling his friends one day: “Rich people want poor people around them because only the presence of poor people gives them the feeling of richness. What is the point in being rich in a place where only rich people live? They need some poor people around so that they could feel important. Haven’t you seen my father jumping up and saluting the ‘malik’ when he comes out of the ‘kothi’? Malik does not acknowledge my papa’s salute. But I am sure internally he must be feeling very good.”

I was really impressed by Munna’s clarity of perception. I have been a pen pusher in a newspaper desk for almost two decades and till that day when I heard him speak to his friends, I never thought in those lines. Now you must be curious what reason Munna has next for rich people wanting poor people around.

“Who will carry their filth?” Munna asks his friends. “Who will hoard those abuses they spit here and there randomly? Do you what my mother told me the other day? She gets abused for doing her job well and if she does not do her job well then too she gets abused. So poor people like my mother have developed a new technique. Make sure that everything is done in such a way that they look perfect, yet not perfect. She cleans bibiji’s and her college going son’s underpants in the same bucket. Then she curses under her breath while doing it.”

“How do you know all this?” questions one of the urchins.

“I overhear mother telling all these to Papa at night,” Munna says in a boastful voice.

“Then you must be seeing your Papa mounting your mother,” says a wily one with an intention to provoke Munna.

“Oh, mother fucker, you must be helping them in that too,” Munna retorts. All the children laugh.

I am not particularly offended when kids in the streets talk in such a filthy language, especially when they are around filth. I live between the posh colony and the slum behind it. It is almost a no man’s land of lower middle class tenements in which I have a one room set, which they call one BHK, means one Bed room, Hall, Kitchen. In my case, I could simply say I have something that could sound like that for a South Delhi address but the truth is there is no different ones; one room makes all these three things; bedroom, hall and kitchen. The bathroom-toilet facilities are on a share basis. Early bird relieves itself without tension. In such places unfortunately there are a no late birds. There is no problem in believing in an adage. But there is a problem when everyone lives it to the dot.

Munna and his friends do not have a problem. One misshapen plastic bottle and some dirty water in it is enough for a royal morning ablution. All the male folk in the slums could squat inside the ridge area which should have been a beautiful public park had it not been deliberately maintained as a dumping pit, and share their life which generally they feel is in the download slide. Those constipated Richie riches would salivate if they see the variety of turds ejected by those scrawny bums. One or two splashes from the bottle, a day’s job is done.

“Do you know why our shit is not the problem but their filth is?” one day Munna asks this question to his bewildered friends. I am a witness; a passerby, a rubber necked enthusiast for scandal. But I am impressed by that eleven year old boy’s intelligence and I wonder from where he gets these questions.

As nobody answers Munna answers himself, “We shit and the suvars, pigs come and eat them up. But the filth that these rich people produce, my God, that is not eaten by anybody. Yes, cows eat and die. They feed cows but rotten rotis. The fight is now between cows and us. Cows also want plastic and we also want. Cows get a temporary fill and a long term illness, we get a some money from the junk shop. But look at the filth here. None is produced by us. We are filth sorters, they are the real filth creators.”

“Why then,” the other urchin pitches in, “they roll their glasses up, cover their noses with fresh hand kerchief, put on goggles and jump to the other side when they pass by it?”

Munna laughs, “You are a stupid, Murda. Who will claim leftover food, used plates and their own shit?”

“I have always tried to see what lies in their homes, just to see how this much filth is created by these people?” Munna ruminates.

“Ask your Papa and Mummy, they work there, don’t they?” Murda says.

“If it is not in the kitchen, it must be in the bedroom,” says the wily one.

“If not in the bedroom, will it be in the hall?” asks Murda.

“Can there be a place within those reflecting window panes and gloomy doors and menacing gates other than kitchen, bedroom and hall, a third place where they create so much of filth,” Munna looks at his friends. They all wear the thinking cap.

Such perspective on life, such clarity on thought and such forthrightness of expression, I just cannot believe it.

The best future I can conjure up for him is the role of a politician, compassionate, visionary and pragmatic. Munna could become one. I smile unto myself.

Next day I see him again. This time I see him washing a truck parked just next to the dump yard which grows into the road like a living organism at night and recoils back in the day when the Municipality cleaners come with their shovels and push carts often surrounded by crows, cows, official rag pickers and rag pickers for fun like Munna and Murda.

Munna asks for ten rupees from the sleepy truck driver and he wins in the bargain. He gets a ten rupees note from the dirty driver who has just thrown a squishy condom out of his cabin at the wily one. He picks it up, smells and throws it back into the cabin. The driver does not seem to notice it. He has already gone back to sleep.

“What will we buy?” asks Munna. They huddle together.

A cricket ball? An ice-cream? A cricket bat? A football? A pair of sneakers? A plate of puri and subzi? Three bananas? Three eggs?

Suddenly they find that nothing could come in that ten rupee note.

“What about a top up card?” Munna says gleefully.

“Of Airtel,” says the wily one dispassionately.

“Do we have a mobile phone for that?” asks Murda.

“Why don’t we snatch it from him?” Munna points to some distance.

Suddenly I see his finger coming to my direction and the boys taking to their heels.

I run to the nearest Metro station. To my office and to my good for nothing life.
Posted by JohnyML at 6:19 PM