What do These Torsos Whisper? Looking at Kanchan Chander’s Works 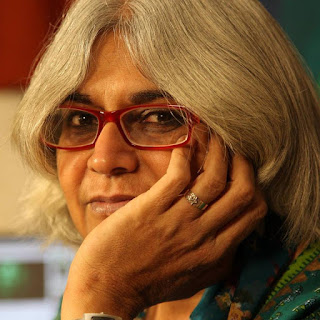 
At the Visual Art Gallery, IHC, New Delhi, I stand before the works of Kanchan Chander, senior artist based in Delhi whose solo exhibition titled ‘Whispering Torsos’ is currently on there and to be frank I am at a loss for words. I am at a loss for words not because I am too overwhelmed to be muted nor am I hugely benumbed by the starkness of glitter, colour and images. I am at a loss for words because I do not know where the works to be celebrated or to be condemned. Hence I take a deep breath and let myself to soak in the works and the meanings that they impart. Kanchan has ‘gone back to the torsos’, as she would like to put it. She has been painting an emblematic female torso for quite some time; a sort of mutilated self, fragmented womanhood, objectified woman’s body and ‘use and throw’ consumable. Definitely, her diversion to the world of sequins and the Bollywood divas had brought her accolades from the Business Class and those have been heavily commoditized since then. That could be one reason that one feels, after the initial psychedelic feeling that gets you at one go, a sense of settlement. You are in a comfort zone; Kanchan Chander and the torso imagery. 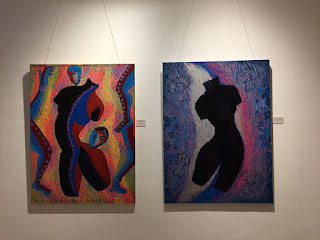 However, I am not really comfortable in the comfort zone that Kanchan has provided with her latest suite of works comprising of the paintings, drawings, graphic prints and an assemblage done during the last two to three years. As they are thematically held together by the dominant imagery of a Torso, mostly in a mutilated ‘tribhanga’ position as idealized by the traditional Indian sculptures, one could forget the three years that have gone in between the making of these works. The works are encased in certain cases, layered and overly ridden by materials such as found objects, sequins, illustrations, stickers and so on. I particular like the works titled ‘Kahani Ek Torso Ki 1 and 2’ and ‘Whispering Torsos 3 and 4’ because if you listen carefully when you could hear the whisperings. These heavily ornamented works reveal how the torsos are surrounded by the social imageries that define the role of woman in the society.

These glittering torsos are seen in the middle of miniature pictures of muscle men, stickers of cartoon characters and graffiti like markings. There are small locks, key holes, padlocks and similar contraptions fitted all over, which together interestingly add to the general ornamentation of the central figure. A closer look tells me how Kanchan as a woman and then as an artist sees the role of woman in our society. They are supposed to be looking good always (presentable and pleasing) but should not have any autonomy over her body or mind. Her decking herself up itself is done for the male gaze, though often they claim to wear their freedom in what they choose to drape themselves. Woman in this case is in a dilemma; on the one hand she is expected to cover herself up from head to toe in order to protect herself from the male attack and on the other hand showing her skin the name of freedom becomes a feast for the gazers. So what a woman does is a balancing act even when she subjects her ‘torso’ for the assessment of the public gaze. Kanchan portrays her torsos as the female body in dilemma. And the locks and contraptions of subjection and subjugation that one sees as a part of ornamentation comes as a translation of Manusmriti that says ‘women are taken care of.’ 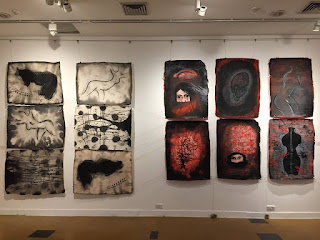 Kanchan borrows two dominant images from the traditional art historical discourse in India; one, Lajja Gauri and two, Yogini. Lajja Gauri is a headless goddess who sits in a certain provocation portion and is seen giving birth to a child. Kanchan replaces the child with a woman; the bold woman giving birth to another bold woman. And in Yogini, she is given an iconographic embellishment with a maze on her left hand, which makes her a punitive goddess or rather a goddess who has got her power to act. Some of the works express the artist’s wishful thinking; ‘Had I got Wings’. Here she paints a surrogate portrait, giving identity to her torsos (or is it reclaiming an asexual/de-sexualized body from the safe camouflage of the torso?) and one of them seen growing angelic wings. Surprisingly, in one of the works of the same series, a surrogate portrait (with unmistakable resemblance to the artist’s younger self) is presented as if she were being expelled from the Garden of Eden. In her drawings Kanchan becomes a lot more playful than in her paintings, and the latest body of drawings on handmade paper seem to be done with a primitive vigour; the vigour of a woman painter on the walls of a cave, a cave of her own.

Is there a tinge of regret in the whisperings of the artists? Is it a remembrance of the things past, which cannot be retrieved? Is it a compensation for what has been lost? I have the reasons to think so because in one of the paintings, I see this title and also the encryption along the spine of the torso, ‘Koi Lauta de Mere Beete Hue Din’ (First I thought it was French)- Give Me those Good Old Days Back. I remembered two things instantly: one, the famous song from Ijaazat (1987), Mera Kuch Samaan Tumara paas pada hai (sukha to mein le aaye thee, geela man shayad bistar ke paas pada ho, vo bhijwa do mera woh saman aluta do—The dried ones I have taken with me, the wet mind is lying somewhere near your cot, please send that back to me). Two, S.H.Raza’s famous painting, ‘Ma Kab Lautoge, Kya Lavoge’ (Mother, when will you come back and what will you bring). I do not know what has provoked Kanchan to pick up those words. It could be a favourite poem of hers, which I do not know. But it is open to interpretation. Is there any regret about the life that has gone by, especially when the artist feels that it is a new beginning? 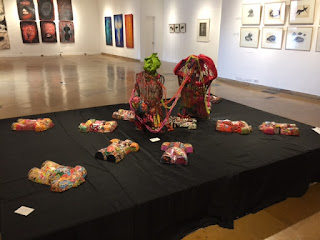 There are mandatory images of Frida Kahlo in this exhibition, which I think most of the women artist in India have a fetish for. They are obsessed not with Frida Kahlo as an artist but with the idea of Frida, who stood for freedom, passion, love, sex and complete disregard for social norms. She had the undying passion towards life. She was in a way narcissistic and she made her life a celebration even at the face of adversities. Indian women artists like Frida because she embodies what they could not or would not do. So in Kanchan too, Frida comes as an idea which I thought could have been avoided. The major problem with women artists in India is this that they are either like sanitized political commentators like Shilpa Gupta or absolutely spiritual abstract artists. If not, they are either reluctant feminists like Anita Dube and Mithu Sen or celebrators of femininity like Seema Kohli. We do not have feminist artists. Nalini Malani, Vasudha Thozhur and Navjot Altaf are two names who would declare their feminist position politically. Rekha Rodwittiya claims herself to be a feminist but she could be maximum a feminist who just do not handle ‘issues’ pertaining to women; women artists could be safe feminists also. Like the closet gays we have closet feminists also. Among the young artists, Neha Chosky and Shweta Bhattad have done overtly feminist statements in their art and performances. Like all that glitter is not gold, all those women artists who handle ‘woman issues’ cannot be feminists. Being a feminist and involved in discursive feminisms in public and private life is a political positioning of the artist that comes with a lot of conviction and social risks. I do not see Kanchan as a feminist artist. She is a reluctant onlooker at the gallery where in the arena the real fights take place; Kanchan is sympathetic to the feminist causes but in her works, she remains feminine with all its traps.
Posted by JohnyML at 4:35 PM