Hearing through Eyes and Sculpting through Lines: Satish Gujral (1925-2020) 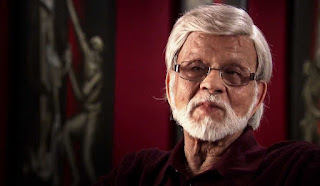 Satish Gujral is no more. He was 94 years old. Born in Jhelum, Punjab in the British India on the Christmas Day of 1925, Gujral was a strong presence in Indian art scene even if he was not affiliated to any of the art movements including the Bombay Progressives Artists Group led by Francis Newton Souza. Gujral attended Mayo School in Lahore initially and then moved to Sir J.J.School of Art in Bombay. An accident rendered him short at hearing and he overcame that issue with his heightened sense of visual as well as spatial art. He also had a short stint at the Art College in Chandigarh though his name was strongly associated with the Palacio de Bellas Artes in the Mexico City where he could work under the great muralists namely Diego Rivera and Alfaro Siqueiros. Gujral also developed his taste for architecture and he designed the famous building of the Belgium Embassy in New Delhi.

I met Satish Gujral sometime in 1998 at his self-designed home in Defense Colony/Lajpat Nagar. I was supposed to write a cover story based on Gujral’s life and art for the Malayalam Vaarika, a New Indian Express publication. Hard at hearing though he welcomed me into home and his wife, Kiran Gujral played the interlocutor’s role between us. She has been so ever since she was married to him. A devoted companion to Gujral, Mrs.Gujral accompanied him everywhere including the high end parties in Delhi. Gujral loved life and also started working in various mediums including granite and marble apart from his favorite mediums such as drawings and oil on canvas. During the interview Gujral revealed to me that there were two traumatic incidents in his life; one, the accident that rendered him hearing impaired and two, the partition of India. 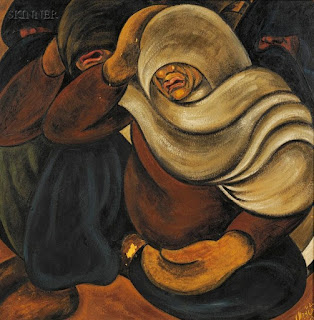 (an early painting by Satish Gujral)

Gujral was the son of a unified India. Though there were rumors doing the rounds about an imminent partition of India, Gujral learned to believe that nothing of that sort would happen. He remained optimistic despite all the personal troubles that he was facing due to bad health conditions. He had to shift cities and colleges, and he got back to his track only when he found his voyage to Mexico. The city of the muralists filled him with a new energy and he could put all his angst into the canvases and the drawings. The works that he did during the partition years and till the early seventies had all the gloom of the partition pangs. His canvases were dominated by black and red colors that embodied the dark days that shrouded both the countries and the blood and gore spilled everywhere. He had seen violence that shook the subcontinent and painting them again and again was the only way to exorcise his personal ghosts haunted him everywhere. Even the self-portraits that he did during those days had this overall gloom.

In 1980s, Gujral seems to have overcome the traumas to certain extent though his ears failed him. But by then he had been a settled family man with a devoted lady to accompany him in all his tasks. This brought sunshine once again to his life and his works started changing. He turned his eyes to the life of the rural folk and the wandering minstrels who danced and sang both in pain and joy. He developed a personal style in portraying them and the emblematic figures thus created started defining the new Gujral paintings. Like a master craftsman he went on drawing and only a few of them were turned into painting. His contemporaries namely M.F.Husain, Kishen Khanna, Manjit Bawa, A.Ramachandran, Paramjit Singh and so on gained their personal momentum in 1980s and even before the blooming of the art market, these masters could find their patrons from among the business communities in India and elsewhere. 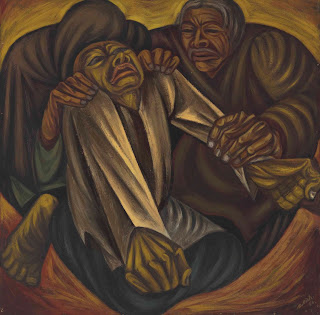 Satish Gujral’s social relevance increased when his brother Inder Kumar Gujral became India’s Prime Minister in 1998. My interview with Satish Gujral had coincided with his brother becoming the Prime Minister of the country. Though he became doubly influential in the art scene with the growing political clout of the family, he remained grounded as before, working in his studio during the day and going out for parties in the evening. His art opened up further as he started experimenting with enduring mediums such as marble and granite. He did not go for fully developed three dimensional forms; instead he transported his paintings and drawings on to the durable mediums thereby giving them the appearance of a relief. He also went back to his drawing practice quite vehemently and surprisingly his drawings from the seventies and the same from the nineties looked the same. It showed his consistency but at the same time some kind of frozenness. Satish Gujral was turning more into a decorative artist than an original innovator in art by the new millennium. 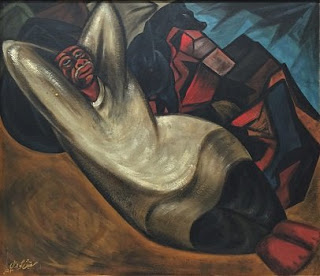 The new art market and the new crop of artists who could aspire for global platforms left artists like Satish Gujral far behind. The interval between his shows increased and there was a time when he almost went absent from the art scene in early 2000s. A couple of shows here and there did not attract much appreciation though he had consistent collectors. His health must have been failing him also by that time. He has been out of action for some time. The repetition of motifs and the relative decorativeness were proving to be less competitive in the newly emerged art market. While his contemporaries were making moolah in the auction circuit, Satish Gujral was kept in waiting. Now with Satish Gujral’s departure, the art market and the auction circuit could take a fresh look at his works and make certain reassessments regarding the value. Satish Gujral was a tortured artist in the beginning and slowly overcame the pains and when he crossed the threshold his art became celebratory in all aspects. May be pure celebration in art is detrimental and it could either fall into decorativeness or into shallow metaphysics. Gujral did not go to the metaphysical way; he was too real to be spiritual and I do not think he ever used such jargon to explain his works. He remained an artist who found pleasure in the making, irrespective of its decorativeness. Was that a problem? Only the time will tell.