Do We Need a Mao or a Meawo? 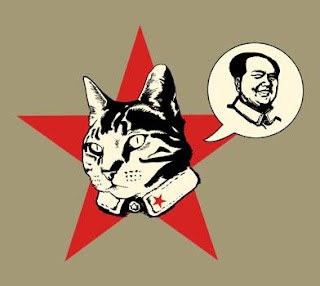 Vivan’s statement is a layered one. If I do the hairsplitting, I can come up with the following interpretations:

I don’t know whether Vivan has intended to say all these things because some of these interpretations could backfire on him and his works as his works too delve too much into soft political symbolism than aggressive ones.

Whether we like it or not, we have to say that Indian contemporary artists are no longer politically committed. However, they are political in their outlook. They deal with political issues in their works and these issues range right from the religious fundamentalism, ideological production of the ‘other’, segregation of religions and communities, distrust on nationalist narratives, India’s mindless submission to the imperialist forces etc.

But everything has been reduced into metaphors and symbols. Give me one example that talks directly about the political oppression that goes on in different forms in India. We will have to scramble through our memory to find one image that speaks with direct political commitment.

Atul Dodiya’s comments are on our grand National narrative. Baiju Parthan’s paintings with esoteric images are about the apocalyptical nature of the ongoing world war. Debanjan Roy’s Gandhiji is too smooth to carry any political critique. T.V.Santhosh’s war paintings are not particularly about Indian political reality. Riyas Komu’s iconic paintings and sculptures also do not talk about the Indian political scenario precisely. Take any artist, there seems to be a control on our political symbolism. Even Ashim Purkayastha’s dig on Gandhiji and our philatelic tradition seems to be aestheticized to the maximum. B.V.Suresh’s burned bread pieces illustrate a particular political genocide in Gujarat but still controlled in its aesthetics. Vivan’s installation using the image of a dead man lying abandoned in the streets becomes a lamentation.

Should I criticize the Indian contemporary artists for not being overtly political? Or should I ask them to dig deeper into history so that we can address our issues more politically than metaphorically?

Representation of Mao in various ways gave birth to political pop in China. We have not represented any political leader or ideologue in our works of art the way the Chinese artists have done. Why?

I think, we have accepted our grand National narrative as an accepted and acceptable given. We are happy with the historical backdrop against which we are living. We are not ready to deal with the micro narratives of our history, perhaps for safety reasons.

When it comes to the rise of right wing fundamentalism, we look for images from genocides and bomb blasts. Or we go much broader in perspective by painting and sculpting surveillance camera images and war images. Our political views have been reduced to the critique of neo-imperialism that gives us a lot of spectacular and glittering images.

I would like to ask why whenever the right wing forces raise their heads, we refuse to go back to the history of it?

You must be remembering the way the Baroda faculty responded to the political vandalism in 2007. They mounted an exhibition showing the representations of nude bodies in Indian tradition. What was that?

Had all the students and artists painted Narendra Modi and mounted a huge exhibition, it would have been the best political response from the artists. Why didn’t they think about it? Does aesthetics means metaphorical and symbolic subtlety?

In Germany during the political oppression in the first half of the 20th century artists delved into a kind of allegorical symbolism to escape the political censorship and wrath. Do we have such a situation right now? If not, why we are so politically complacent and submissive?

We have to accept that we are not in a situation to produce political pop because we are more interested into the pop minus political.

I am not accusing anyone because I too am a part of this complacent approach.