A Manual for Surviving in Contemporary Art Scene 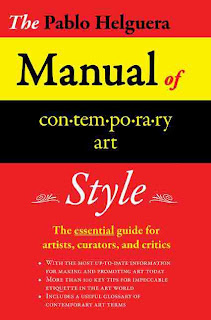 I should thank a few people before I talk about a book that I read yesterday night. Thank you Kavitha Balakrishnan, a fellow art historian and writer working from Kerala, for telling me first time that my writing has the verve and joviality of the writings of the New York based Spanish artist Pablo Helguera. She came up in chat box one day and asked me whether I had read this book titled ‘The Pablo Helguera Manual of Contemporary Art Style’. She was looking for a copy of it as she could get a glimpse of it in internet. This conversation happened almost a month back and I contacted all the bookstores in Delhi in vain.

I have this tendency to hunt a book down if I really take fancy of it. Finally I found that it was available in Amazon.com but the problem was that I did not have a credit card to place the order. Then I remembered how I had asked a few friendly gallerists in India to get me interesting books on art from wherever possible. They had readily agreed on this. So I called up to Gallery Espace, New Delhi and they immediately placed the order with Amazon.com.

Perhaps, it is a book that has been already written in the minds of all the people who operate in the art world. But as the survival in a highly competitive art world is a risky affair, none would write it down. Here, we have Pablo Helguera writing it down for all of us. As I mentioned before, it is an inverted perspective and I am sure only inverted perspective could bring out the truth content of things as a normal perspective is a compromised view of things.

Helguera, at the outset itself finds an analogy between the Art World (which he qualifies as AW throughout the book) and the game of chess. According to him, the King is a Museum director, Queen is an art collector, Curators are the rooks, Dealers are the knights, Critics are the bishops and the Artists are the pawns. Like in a chess game, the paws are placed in front and are given freedom to move slowly, step by step. Their aim is to reach the King but there are many hurdles to cross. But unlike in Chess, the paws often try to please the rooks and the knights only to get the attention of the King. But all the pawns are not allowed to reach the king. In the process, many are stopped, discarded and eliminated from the game. However, once a rook reaches the final row and meets the King, he/she achieves a kind of power, which is very difficult to cut down by external forces.

The author is in his satirical best as he talks about each every participant in the AW obliquely. Helguera’s observations are based on the researches and interviews that he conducted in the New York AW. But when we read the book we feel that he is talking about our own AW. That means, wherever it is AWs use the same strategies and cunningness to survive.

I would like to give a few random examples from his writing rather than paraphrasing it:

“Curators, like politicians, should keep a friendly attitude with all artists. Regardless of how weak an artist may appear, it is in the curator’s interest to show attention and sympathy to this artist, as one never knows who may eventually rise to stardom.”

“It is fairly common for curatorial assistants to be in charge of the schedule and travel logistics of international artist who may come to visit institutions in order to mount their art works. This usually also results in brief flings, one-night stands, and even long standing affairs. It is not recommended for young curators to sleep with famous artist, since the rumors can be greatly damaging for the young curators’ career.”

“In order to generate quick exhibition ideas: a) open a dictionary and point a finger to any page randomly; b) take the ‘selected’ word as the topic of the exhibition and search Google using this word along with the phrase ‘contemporary art’; c) generate a preliminary artist list based on the names that will come up from the mentioning of this subject.”

“In order to write an essay on any subject, type the theme of the essay alongside the word ‘conceptual’. The search results will also work as bibliography.”

“The average art dealer will go through difficult financial, and other situations. Nevertheless, dealer should never cease projecting a successful image, even if their business is on the brink of a collapse. It is recommended that the dealer face his or herself at the mirror right after waking up every morning and in complete privacy, repeat: “I am the next Larry Gagosian” or “I am the next Barbara Gladstone.””

“Reviews- that form of writing concomitantly feverishly desired and bitterly hated by the AW, are the critic’s weapons. Everyone will pretend that they have not read them when they are negative, and all will say they read them if they are positive (everyone reads them, in either case.)”

The book is full of suggestions and observations written in a mock serious manner. Anybody operating in the art world is referred, their characteristics are delineated and tips are given to improve their status. Whether to have sex with an artist or art critic is one of the topics. Could you appear in public with a less successful spouse is another issue. Though apparently hilarious, these suggestions and observations would give real time tips to improve one’s own character and also it would help one to have a re-look at one’s own behavior in the AW.

Before I close, let me give a few examples from the ‘glossary’ that Helguera has compiled in the course of his research for this book.

Term that emerges from the fusion of the term ‘ornamentation’ and the name of the philosopher Theodor W.Adorno. The term refers to the practice, favored by certain curators and critics, of compulsively quoting random phrases by philosophers such as Adorno, Baudrillard, Derrida, Deleuze, Nietszche and Benjamin. Adornamentation is characterized by stating a concept that bears no relationship to the topic that is being in discussion. It is often used to prevent any potential criticism of an essay, as the random mention of the quote requires the potential critic to go back and consult the original text-which generally is a very time consuming and ultimately distracting task.

Exhibition space that shows the same kind of art as any art gallery, with the difference that those in charge do not know how to sell art.

Art of antiquity, before the invention of art fairs.

Monthly publication considered as the official magazine of the AW club. Originally conceived to transmit content, it was deemed necessary to add 275 additional pages of advertising to it, allowing 25 pages for the interesting conversations between the editors and their friends.

A marketing concept invented sometime in the nineteenth century, with the supposition that it would be interesting to invite the best artists in the world to the same place every two years to see their work. The proliferation of biennials has resulted in a deficit of ideas; today there are more biennials than rational subjects for a biennial.

Art genre, invented by Robert Smithson, Walter de Maria and Michael Heizer in the sixties in order to question the museum as a sacred space. Today, the works of these artist have become sacred and can be seen at your nearest museum.

(Pablo Helguera is a visual artist living in New York. His work, which ranges from performance art, video, and public art, often involves historical research, fiction, humor, and criticism. Previously, Helguera worked as Senior Manager of Education of the Guggenheim Museum in New York, as well as many other museums. He has described the book as follows: "The Manual is an autobiography of sorts, documenting the anecdotes, behind-the-scenes maneuvers, and interactions that I have observed in the art world over the years. But it also seeks to show the ways in which we all conform to regulated patterns of behavior in order to be admitted into the high spheres of the contemporary art scene. In the art world, we all are performers, and here I tried to describe some parts of our unspoken script".)
(This section in brackets is quoted from an internet source)
Posted by JohnyML at 5:44 PM