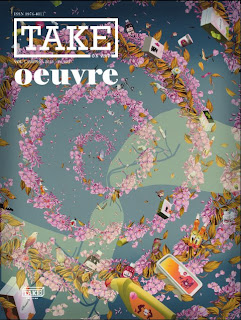 Signifier- The Oeuvre of the artists

Signified- I too am there with you

Confused. Close your eyes. Then touch the cover page of the latest Take on Art Magazine. No, grope it with your finger tips. Now you got it. Yes, you touch Tukral and Tagra’s painting. It is wonderful to touch a painting with no security people around.

And touching a dotted condom is also very pleasurable; for both the parties. The image that you grope over is the image of a dotted condom with added pleasure of aesthetics. The cover page of the latest Take on Art Magazine has an embossed image from Tukral and Tagra’s famous ‘Put it On’ project.

And, Take on Art Magazine jointly edited by Bhavna Kakar and artist Sophie Ernst is a visual as well as cerebral treat. Go and grab it. Don’t grab the beautiful girls at the counter. Then the Magazine could turn out to be injurious to health. It is not good to have art, which is injurious to health.

As usual I read the magazine from back to front, a process that I enjoy very much. In a candid conversation between Sudarshan Shetty and Ina Puri, the artist tells the readers that he is a middle class man and remains to be one. Hence, he does not use intricate technology; but he does use them and make the viewer feel that they see some technology in it. Veeranganakumari Solanki chats up with Nalini Malani. When Malani speaks you get the meaning of her otherwise complicated works. I like when she says that in India Feminism is not a finished project though many young women artists think so.

In her Phantom Lady column Pushpamala writes about Donkeys in Indian art keeping Umesh Madanahalli’s collaborative performance with donkeys and art students as a referent. Very interesting reading. She may also read my blog posted on 3rd October 2008 in the following link where I write about ‘Donkeys in/and Indian Contemporary Art’:
http://johnyml.blogspot.com/2008/10/donkeys-inand-indian-contemporary-art.html

Sunil Mehra rips off the Indian curatorial practice in his essay titled ‘Curator-Cure Thyself’. I want to add, ‘frailty thy name is curator’. Just joking. In my column I deal with ARTinficial Insemination Syndrom, which means the artists who heavily use assistants and keep the truth behind the curtains. Have a look.

Then comes the oeuvre section. T.V.Santhosh’s is like a Haiku poem; short and simple. Anoop Mathew Thomas’ is captivating with its series of visuals. Saranath Banerjee….I come from a land of great satirists. It is very difficult to make me laugh. Subodh Gupta, the usual stuff. Jitish Kallat, scholarly as ever. Dayanita Singh, haunted by Orhan Pamuk’s museum thoughts. Yes, I should mention Pors and Rao and Pooja Iranna.

Rashmi Kaleka seems to be getting her due finally. But I wonder why when she did her actual video work and exhibited in the Scratch show curated by Swapan Seth for Sakshi Gallery, she featured the hawkers’ ‘aawaaz’ (calls) along with the visuals from the Old Delhi. If I am wrong I will apologize to her personally. Why in New Delhi are there no hawkers? Was it an effort to make the video exotic?

Ranbir Kaleka is sophisticated in his words and deeds. The article by Lucien Harris on Tukral and Tagra is informative. In fact, after the IAS 3, I have started looking at their works with a new interest.

There is an interesting but ideological coalescing of scholarship and branding in the pages devoted for Riyas Komu. He is presented as the editor of a newspaper selectively published and discreetly circulated. In this Komu speaks of the people deprived of social facilities. But the article is written by Radhika Desai, a scholar in architecture and urbanology. The pages are designed in such a way that the piece almost sounds like written by the artist himself. I am not convinced of his newspaper because it is propagandist and it came along with a high society magazine called Platform. If Common Wealth Games and the corruption around it had triggered this artist’s love for the deprived people, I would demand him to expose the corruptions in the art scene, like Hans Haacke. Also, I would ask him to do a survey of the lands and properties bought by the artists during the boom time and after and enquire whether such deals have deprived any people of their dwelling spaces, shitting spaces and playing grounds. Let’s play. Political ambiguity of the artist cannot be covered with red coated signs and an article by Mani Shankar Aiyar.

We as cultural critics or art critics are too knowledgeable people. We cannot see anything with innocent eyes. Is that a problem? I don’t know. Anyway, when I look at Take on Art Magazine issue, I could see the editor’s eagerness to be with the latest and the trendiest. She wants to highlight the flavors of the season.

Anyway, as a magazine this edition of Take on Art is very successful. And I recommend the art professionals to go for it; if not for intellectual pleasure, at least for tasting the latest flavors.
Posted by JohnyML at 8:54 AM

yes its good cover design for sure
one can feel the real dotted....

It is not good to have art, which is injurious to health.

I agree. It is not good to have art as it is injurious to health.

In an over populated art scene of us it is better to use condoms with or without ribs and dots.

Since art has become banal let seek pleasure in other forms.