Soren Pors and Aparna Rao met at the Interactive Design Institute Ivrea, Italy in 2002. It was electro-mechanics at first sight. In 2004, they started working together. And ‘Applied Fiction’ is the result of their combined creative efforts and now it is in the form of a solo show at the Vadehra Art Gallery, New Delhi.

They are known as Pors and Rao. It could be Rao and Pors, for hardcore feminists. Seen from whichever angle, this duo excels many other duos in the contemporary art scene thanks to their sheer understanding of form, fiction and mechanics. Consider all those conceptual, experimental and interactive works happening around, most of them fail to function thanks to the heavy loads of intellectualism placed on those tender motors. When you see Applied Fiction, you will forget all those burdens and you smile because you connect with the works in different levels; physically, intellectually and above all emotionally. 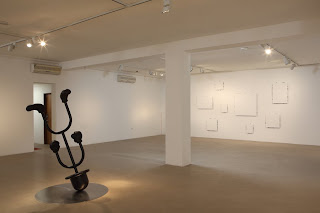 Applied Fiction, as I understand is all about applied fiction. Is there any problem in that? Here material and mechanics are brought into a single unit so that the artists could speak to the audience through them. We grow up listening to various stories, reading several of them and seeing various types of mechanics developing around us. We are at once attached and detached to such mechanics and stories. When they are brought together, that particular moment of unity becomes a moment of revelation. Pors and Rao help us as viewers to understand the simple dynamics of the world of fiction and mechanics through images, objects, words and puns.

‘Decoy’ reminds you of the Vodafone zoo zoos. It is a rounded object with two hands and a pipette-like head. There are no hagiographic suggestions to make us think that it represents a cartoonish human form. Despite this no-emphasis on human form, when it moves as you cross the sensor, you feel a lot of love for that object. The very animation of the object makes it quite humane and a sort of love that we feel for children fills in our mind and in the process we become children. And with no verbal suggestions, we start playing with it thereby turning the work into a really interactive object.

This interactive quality is visible in all the other works in this solo at Vadehra. Take ‘Pygmies’ for example. There are eight rectangle and square frames on the wall that remind you of Malevich and Mondrian for no reason. But you forget all your art history the moment you move and accidentally stamp on the floor. The small black metal appendages with two white dots on them to suggest a face placed along the four sides of all these rectangles and squares just jump down as they hear the noise. Then they slowly come up as if to ogle at you. Then the play starts; you stamp on the floor, they hide behind the frames, then they come up and you play again. You almost forget that you are playing with a mechanical object.

Look at ‘Drifter’. This is a universal form of human body. Using simple lines you can make a man like this. In India such forms are once used to connote a ‘sahib’, which means a white ruler because white rulers used to wear hats. So it is a fiction for an Indian; if Soren does not know it, Arpana knows. As she knows it, both of them know it. Now we have this man, this sahib standing upside down and moving on his head, but he never falls down. Does that mean that the colonial imports and inputs are still around though they are inverted and drifted like this? I am reading too much into it but it gives me a lot of pleasure to see and read the Drifter like this.

Sun Shadow is another work that makes you smile. You feel so much love, sympathy and affection for that sun, who is otherwise fierce and eye-piercing. Here you see a clumsily made shadow of a sun fallen on the floor. The moment you come around it, it attempts to climb on the wall. It at once connotes the movement of the sun’s shadow/ movement of light from wall to floor and floor to wall and our childhood feeling for light and its movements. In fact there is a stronger inversion of logic in this pun-filled work. Sun does not cast its own shadow. However, when we see the Sun Shadow at Vadehra we think about sun’s shadow without questioning it even for a moment. The sun becomes an animated character, almost helpless and cute. The artists create a new linguistic structure in order to topple the existing ones; application of fiction over the logical realities.

‘Teddy Universe’ works on the basic concepts and images that the words evoke. Teddy is teddy bear and universe is universe. And when you look up, hanging from the ceiling is an enlarged black Teddy with small little pores all over his body. From inside this teddy form is lit up and you suddenly tend to see the teddy as sky and a constellation in itself. You think about various constellations and think of the bear forms in it. Pors and Rao tell us that it is important go back to that state of mind that a child carries when he lies on the lap of his mother and wistfully looks at the darkening sky at night and at his mother’s face lit up by the lamp.

Split Knife is rather a less attractive work in the whole show as we have seen similar works elsewhere. One end of a knife comes out of one pedestal and the other end goes in and the movement continues. This is an illusion created out of simple mechanics and the feeling of continuity of an object as we see two edges of it moving in a synchronized fashion, is something that the artists invest their energies on. Though it did not appeal me too much, as it is a part of the whole, one could still see this work with same wonderment.

Applied Fiction is about linguistics and fiction. It also speaks of fictitious linguistics and linguistic fiction. This says, it is not this, this is not it. But it is what it is and this is what this is. This this-ness of this and non-this-ness of this make this project interesting and appealing. And above all the works take you to a plane that all art aspire to take you; to pure bliss, Ananada.
Posted by JohnyML at 8:26 AM