Deewar and Vinay Lal: History of a Film and a Historian Par Excellence 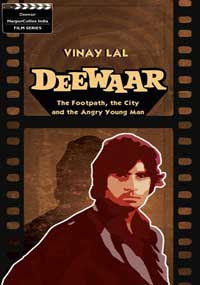 ‘Mere paas maa hai’ (I have mother with me) – a dialogue delivered by the dimple cheeked Shashi Kapoor in a movie titled, ‘Deewar’, even after thirty five years of its release in 1975 still reverberates in the minds of people. This dialogue, often used, misused and abused in different grave and comical situations, is a semiological referent that takes the listener of it to the turbulent years of 1970s and80s, the two decades, which could be called the decades of transition as far as modern Indian history is concerned. Today, ‘Deewar’ has achieved a cultic status. Vinay Lal, one of the most interesting contemporary cultural historians, in his latest book titled ‘Deewar- The Footpath, the City and the Angry Young Man’ published by Harper Collins India, analyses how Deewar and its narrative structure left an indelible mark on the Indian political, cultural and sociological psyche.


Written by Salim-Javed (Salim Khan and Javed Akhtar) and directed by Yash Chopra, Deewar (The Wall) was released on 24th January 1975. In no time it catapulted the young hero of the movie, Amitabh Bacchan into undisputable stardom. A lanky young man with brooding eyes and detached nature Amitabh Bacchan was best suitable for the character Vijay Verma, who brushed with the wrong side of law, only to redeem the lost dignity of his mother. As most of the Indian film goers know, the plot of Deewar was familiar and it resonated the moral, ethical, familial, political and gender conflicts of Indian puranas and epics like Mahabharata and Ramayana. And above all it brought the mother/woman as the centre of this conflict when the brothers brought for moral, ethical and social supremacy.


Ananda Babu is a righteous labour union leader who worked in a coal mine and led strikes against the management to achieve the demands of the workers for better wages and working conditions. His family consisting of wife Sumitra Devi and young sons, Vijay and Ravi, is abducted to blackmail Ananda Babu and to coerce him to sign a deal that divests the labourers of their rights. Caught between familial love and duty, and professional loyalty and allegiance, Ananda Babu finally signs the papers and becomes a turncoat before the eyes of his fellow workers. Abused, insulted and injured Ananda Babu goes into deep silence and unable to withstand the prick of conscience, he leaves his family behind and abdicates himself to the unknown.


Young Vijay Verma is caught by the people in the village and they brand his left hand with a tattoo, ‘Mera baap chor hai’ (My father is a thief). Ostracised by the society, the mother and sons leave the village and go to Bombay, the city where one could find a life, success and dignity. Mother works in a construction site, Vijay starts off as a shoe-shine boy and Ravi is send to school. They live under a bridge where the milling migrants spend their sub-human lives, hoping for a miracle, which would one day turn their lives into gold. Vijay, permanently scarred by the inscription on his skin and soul, becomes a dockyard worker and then a henchman of a mafia don, Davar. Soon he becomes a rich smuggler. In the meanwhile, the educated and law abiding Ravi becomes a police inspector. Vijay buys the same skyscraper as a gift for his mother, which she helped to build as a labourer. But she refuses to take that gift as she and Ravi come to know that Vijay plays with ill-begotten money. Typical to a Bollywood movie, Ravi is now ready to take the smugglers and dons and his duty to state asks him to hunt down his brother who had sacrificed his life for educating him. At the same time, as the mafia gangs are hell bent on doing away with inspector Ravi, Vijay reveals to them that Ravi is his brother. Vijay asks Ravi to get transferred to some other station but he refuses to do so. Mother falls ill and now Vijay, the atheist asks Lord Shiva to rescue her. Finally, the brothers meet under the bridge where they spent their struggling days as migrant boys. Vijay tells him that he has palatial houses, cars and bank balance. What have you got to claim as yours? Ravi looks up to the heavens and says, Mere pass maa hai. In the following scenes, Ravi shoots Vijay down and a dying Vijay lies on the lap of his mother and tells her that ever since he left them, he never could get proper sleep. Today he is on her lap and he wanted her to put him to sleep.


Vinay Lal approaches the film as a repository of semiotic treasures. In the initial chapters he contextualises the film taking the socio-political history of India as a point of departure. Citing the impending political Emergency imposed by the then Prime Minister, Indira Gandhi, and the growing urbanization, mass migration and the utter disillusionment of the young people about their future as the markers of the film, Vinay Lal tells the readers that Deewar is perhaps the first film in Indian screen that deals with urbanization and migration as a theme in itself. Bringing the establishment of characters, actors and stars, besides establishing the psychology and sociology of stardom, Lal points out how the temporal setting of the film was ripe enough to launch an angry young man who is existential in nature rather than political. The angry young man’s private fears explode into the public realm and as Barthes says it moves from puntum to the stadium and achieves the status of a myth. Amitabh Bacchan was all the more suitable for the bill and his looks and demeanour helped him to become the first super-reigning super star. Whatever he does in the film seems to be detached but passionate; he does not do it for his well being, but for the dignity of his family. Unlike the happy-go-lucky young men of today, he was not revelling on his achievement. Only once in the whole movie, he makes claims of his achievements but that too is to save his brother’s life. And this detachment was romantic therefore appealing for the millions of young men and women of the day.


Vinay Lal focuses on the themes of signature, identity, language and mother in his study. Signature, he considers as a social bonding that makes the retractor a culprit. Signature/branding gives the signed and the branded a voice and at once it takes away the voice. Ananda Babu signs the document that would go against the rights of the workers and he is rendered speechless after that. In a sense, Vijay also loses his right of speech once he is branded by the villagers. However, this act of branding works on his psyche as a trigger to develop a speech that goes against the norms of the accepted laws of the state. While the father loses his speech, the son gains it. Vinay Lal views it as a the exit and entry into a symbolic/linguistic order that distinguishes the man from the animal.


Collating signature with identity, Vinay Lal further speaks of the scene where Ravi demands a signature from Vijay. Here Ravi demands it on behalf of the state. If Vijay signs the papers, he divests his chosen rights of being a free individual, and he refuses to surrender to the demand. Instead, he asks Ravi to get the signatures of all those people who had tortured their father and mother and left them homeless and rudderless in their early life. Also Vinay Lal narrates the role of mother who handles the conflicts simultaneously operating from either side of the state and emotional state. He identifies the mother as a supreme example of mythical mother, who eventually becomes a pawn in the games between males.


Vinay Lal analyses the film scene by scene in an interesting manner and never falls into the trap of reading it along Freudian lines, which could have made the study a predictable one. As an insightful historian, he explains the music, colours, tones, textures and linguistic flare used in making up the body of the film. Lal approaches the movie thematically as well as texturally. His textual analysis of the film makes the reader wanting for more; but this book runs into two hundred pages ends up with certain comparisons with Hollywood flicks that had treated the same theme but in dissimilar ways. Vinay Lal mouths of words of Davar who opines on the shoe-shine boy, Vijay, yeh lambi race ka khoda hai (A race horse that could run for long time) and underlines the fact that Deewar could run in the race courses of our cultural scenario for many years to come.
Posted by JohnyML at 9:52 AM

hi,
read the article as I did not watch the film Deewar :)
Am deeply interested in films and history of films though. one small point regarding addressing urbanization in Indian films, I guess the pioneer may be the Satyajit Ray's Apur Sansar(1959)the last film of Apu trilogy by him.