Do We Need Vaginal Art in India? 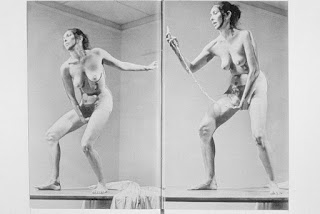 
India remains still conservative in the case of performance art. In 1975 Carolee Schneemann did her ‘Interior Scroll’ performance, which shook up the world for it was for the first time in the history of feminist performance that some artist involved her vagina directly in making art. For Marina Abromovic, female body was a question in general in most of her performances she focused on the body as a site of contestations of/for various socio-economic forces. Schneemann changed the equation by bringing vagina directly into focus. This performance gave courage to many artists including Judy Chicago to come up with her ‘Dinner Party’ in 1979, which became a feast of vulvas and changed the general perception of the world on this. Gustav Courbet in his ‘Origin of the World’ (1866) had enthralled world by bringing a Vagina right in the focus. Then it took almost hundred and ten years for a female artist to negotiate the same from a different ideological and practical perspective. Shneemann’s was not a painting; it was a performance involving her own body, which she continued in many of her other performances including the Meat Love. 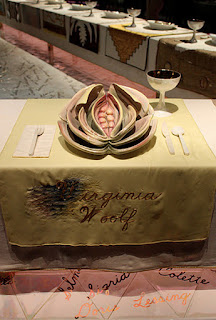 Recently, people remembered Schneemann’s ‘Interior Scroll’ because someone found out that it completed forty years. Generally speaking forty years is not a landmark for celebration. Except in the case of human beings and their dates of birth, forty does not make an important number in other cases. People say forty is the time when men and women waver from their right tracks either by settling down or by going astray. Settling down is a sort of confirming with the society and straying away is a sort of rebellion or foolishness depending on which side of the spectrum you are standing. Some say forty is the beginning of mid life crisis and yet another group says that sixty is the new forty so the crisis should start at the age of forty. Whatever be the case, a work of art generally is not remembered for completing forty years. But Schneemann’s pioneering work is remembered for good. I say it for good because exactly in that year, when Schneemann was pulling out a piece of philosophical writing on vulva from her vagina, here in India a woman was clamping down on free thinking. Indira Gandhi declared Emergency in 1975. 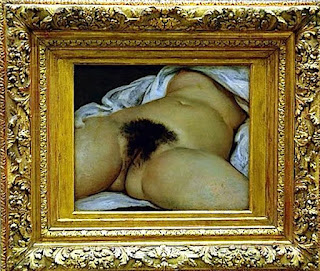 (Origin of the world by Gustav Courbet 1866)

We cannot compare ourselves with the West, especially when we are talking about something that happened in 1975 that looks so remote now. What I could say that the western artists were so forced to do such a performance that we could now realize how severe their society was on women. It was the time, people as a part of their general rebellion and uprising, when women too were speaking for their freedom in the ways that were heard of till date. In India, with the limited and protected economy, women were not really thinking about exposing their own midriff, let alone their vulvas. Forty years down the line the western societies that had given birth to works like ‘Interior Scroll’ have achieved a considerable amount of freedom for the females and India is where the west was standing forty years back. Hence, it is natural for us to think that our women artist (performance artists) should think something similar to this in order to address the dwindling freedom for women in our society. Moral policing has become rampant and women are forced to go behind curtains. What we see today in the streets and in the movies are not really the symptoms of freedom but the sheer exercising of male ideology. 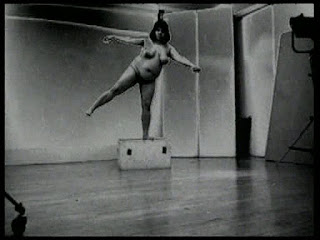 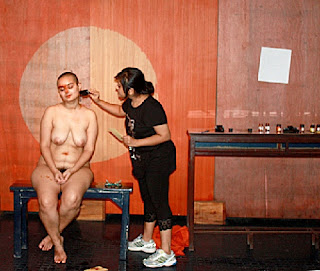 In 2005, Shantanu-Manmeet duo had done a performance, ‘Hamam mein hum sab nange hai par hamam hai kahan?’ at the Khoj International studio in Khirkee in Delhi. As I have mentioned elsewhere, today even the documentation of that performance is out of circulation fearing some kind of moral policing. In that performance, Shantanu and Manmeet had stripped themselves naked and let their bodies be interpolated by scriptures by the (drunken) onlookers. Shantanu had done another path breaking performance with his father, in which he had stripped himself naked and served tea to his ageing father. Though Inder Salim Tikku’s narcissistic performances do not match up to the intensity of these performances, he too had done his bit by chopping off his finger tip, as a protest against the growing unrest in Kashmir. Sushil Kumar, before anybody did a naked performance had walked in nude holding a Buddha head copy along the Delhi streets in mid 1990s. But none of them were females.

Neha Chosky, when did her naked performance in Sarai Delhi, a few years back, the pictures were spread around through mobile phone cameras (I do not remember there was this application called whatsapp then) no debate was furthered or made the stills available for a public discourse. I do not know whether the artist herself regret her act or she would come up with a statement about the work in near future or not. Shweta Bhattad was another bold one to go around masquerading as a female warrior complete with a chastity belt. She presented herself in public and private spaces so that people could wonder at the meaning of her body specifically protected with some appendages. In a show curated by me after the Nirbhaya issue in Delhi there were some bold expressions by a few women artists who could openly speak about female body without any reservation. Titled, ‘Rare Acts of Political Engagement – R.A.P.E), this show had the performative works of poet Meena Kandasamy, Kanika Sharma, Maya Pillai, Megha Joshi and so on. Though they were not performing within the gallery, so to speak, their acts were performative in nature. 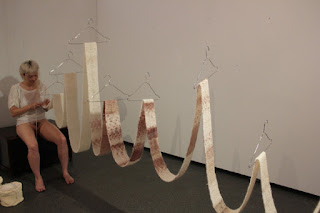 Somehow, our senior and younger artists are not coming forward to articulate the body politics of the female bodies in India. They are painting well, they are doing videos well, they are attending workshops (they look so serious to be taken seriously in those workshops) and doing a lot of things. But they are not coming up with bold works that would articulate the concerns of the female body. Or have they done enough? Is it because of the Indian ethos today where everything has to be subtle when it comes to the issues of the female body? Is there a self-censorship already in place due to the right wing fundamentalism? Women artists in India should answer these questions. I understand that it is not imperative that a female performance artist to expose her vulva or body to make sense. She could do a lot of other things to drive a point in. But still why they are not doing it? Menstrual blood has appeared in too many works done by Indian women artists. But nobody has done a work like the Brazilian artist namely Ana Alvarez Errecalde, who openly gave birth to a child and took photographs with and without umbilical cord connected to her body and the blood and all. Or is it too bold to be accommodated in our gallery circuit where foolishness is the hallmark of the policy of most of the galleries? 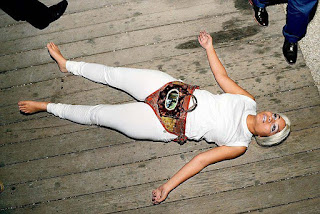 We do not even have a work like Casey Jenkins who calls herself a ‘craftivist’ and uses her own vagina as a holder for wool balls so that she could sit in a gallery and knit woolen clothes taking the wool out of her vagina. A take off from Scheemann’s ‘Interior Scroll’, the work titled Vaginal Knitting by Jenkins is a daring statement of/on femininity that faces both ‘discomfort and pleasure’ with vaginas. I do not know still whether the demand for body art is legitimized at all here in India. If ethos and milieu of globalization do not stop artists from imitating ideas of international artists why not then the nude performances that involve vagina of the Indian women artists? We have enough of Penis exhibitions in public performances like Kumbh Mela though it is in a religious context. Do we need to have feminist performances in India involving vulvas or we just do not want it at all? Let the women artists speak.