Note Book of Ordinary Things 7: The Grinding Stones of the Yesteryears 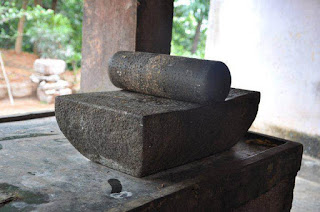 Grinding stone sounds too English. So let’s stick to Ammikkallu. Those who do not know how it looks like let me explain: it is a flat granite block measuring a width of a foot and length of one and half feet. There is one cylindrical granite piece which is used as a roller to grind the spices and coconut to make the spicy paste and chutneys. Grinding stone or Ammikallu is a very primitive tool that came from the nomadic tribes to the kitchens of the settled family units and it remained as an important kitchen device for many centuries till mixers (called mixies) and grinders replaced them. Grinding stones are of different types and are still used by the rural people and also the nomadic people who live in temporary shacks in the abandoned plots. The name Ammikkallu comes from Tamil, where Ammi/Amma means mother and Kallu means stone. But in the rural parlance it used to have more intimate terms which conjoin both the pieces in a familial relationship. The granite slab was called Thallakkallu (Mother Stone) and roller was called Pillakkallu (Child Stone). So that means it is cryptic and symbolic form of our art historical Mother and Child. Looking deeply into the history of it I could say that this is an unbroken link from the Neolithic ages. 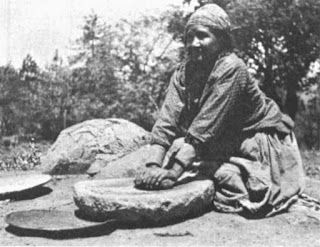 When I was a child, when there were no boundary walls between plots where houses stood, I could hear the music of Ammikkallu from different houses and could easily say which woman was now grinding spices. Ammikkallu were like heirlooms; it came with the making of a new house. Or the parents gave away their favourite stones to their children who made new houses. These grinding stones were not like other kitchen utensils which were renewed almost every year. The cooking pots were renewed with the annual village fair, spoons and paddles were changed annually. But these grinding stones stayed like the cave art of any place. But there was something interesting about these. Each grinding stone was different from the ‘music’ it made while in use. Granite stones have a particular tendency; if you use it for a long time, the timbre and tone of it would change and more subtle and sharp voices would come out of it. That’s why in the old granite temples, the vertical pillars develop a ‘sense of music’ over a period of several centuries. There were also master stone cutters who could actually tune in the seven musical notes into these pillars. Grinding stones were not different.

Thanks to daily use, these Ammikkallus generated music. While playing I could tell whether it was coming from my grandmother’s kitchen or from my mother’s kitchen. My mother’s grinding stone was rather new and it generated the noises of her impatience, irritation and anger for my father or his mother who stayed in the next house. But my paternal grandmother’s grinding stone was old, perhaps came to her from her mother and was like a smooth piece of granite slab with a slender roller with the smoothness of the idols and sculptures in the South Indian temples. When she worked on it, it created a twinkling sound which was very musical to us, even if my grandmother had not connection with music, but often evoked rebukes from my mother from this kitchen. I could also tell which housewife in the neighbourhood was now using her grindstone because all of us, children had access to any kitchen without anybody’s permission. At times we would be jumping over these hapless mothers and grandmothers while they worked in kitchen and we played in abandonment. 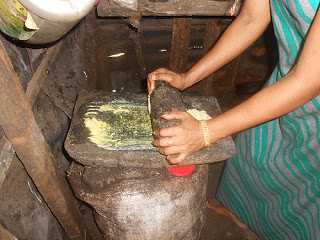 As time changed, the position of the Ammikkallu was ‘raised’ inside the kitchen. In those good old days women used to sit on the floor as the grinding stones were placed on the kitchen floor. These were the occasion where we children got to know how female shanks looked like for to sit on the floor and work at these grinding stone women had to roll up their lungis upto the knees. Though there was no sexual feeling to it, the sight of the smooth skins used to send electric vibrations inside many a boy who had seen such scenes. With the arrival of modernity and the changes happened in the general architectural modes, the grinding stones were elevated to the kitchen slabs so that women could stand and work at the grinding stones. Then came the period of mixers. It was early 1980s. There was no television but the magazines were filled with the advertisements of mixers. The first one to conquer the Kerala market then was Sumeet Mixie. Having a Sumeet Mixie at home was like having an SUV in front of your house. Shops and co-operative societies started selling these mixies on instalment. Soon the sonic ambience of my living surroundings changed. It was a sort of grating and irritating noise that went on for quite some time and subsided with the turning of the regulators.

There was a period when people had to live with both the grinding stone and the mixies. Human beings are like that. Perhaps because of emotional attachment or because of utmost pragmatism most of the people do not throw away the old habits all of a sudden. When they have new utensils and equipment at home, they continue to use the old and the new devices. It was visible when the STD telephone came in India. People where happy with the snail mail and they could wait for ten to fifteen days for even intimate communications. Telecom revolution changed the way people communicated in early 1990s. However, people refused to leave the old inland letters, post cards and airmails behind. It took some time people to switch completely to the new mode. Same thing is visible even today when people go to the banks to make entries in their passbooks. Even if everything is digital, seeing the amount in a printed book makes people reassured about their savings. Grinding stones also went through this period of mixed use. People refuse to leave their old companions behind. But mixies made the works of women easier so eventually they had to discard the grinding stones and along with it the physical exertion that was a part of making spices. 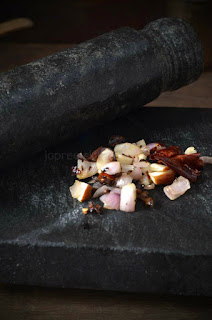 Women were strong when they were using traditional kitchen utensils. Each work had given them enough exercise for their muscles exactly the working class men got their daily exercise. But with the increase in education, with more women going out for work, with eased working atmosphere at home (mixies, grinders, readymade batter, ready chapattis, washing machine, driers, vacuum cleaners and so on) women too have now become the victims of life style diseases. The negative fallout of all these changes is this that while men find alternative exercise regimes in gyms and parks women are driven to kitchens once again and to the television sets making them lead absolutely unhealthy lives. Unfortunately except in big cities and big towns we do not have gyms for women in the rural areas. Even if someone dare to do some physical exercise in public, if she is not officially in the sport sector her exercising regime would not be largely appreciated by the families and public. True that girl children have gained increased mobility by using cycles and motor cycles, but again once they are married their exercise is reduced to kitchen work or general running around doing errands at home.

I am not a propagator of old utensils or tools. I could only look back with a sort of nostalgia and think culturally how these changes have affected our living styles. The major change that I observe by the retreating of these old utensils is in the architecture sector. Whether we accept it or not, everything in a society is intricately connected and in a very complex fashion, therefore discussing anything in an isolated fashion would yield only fallacious results. For examples, we cannot isolate the removal of grinding stones from our kitchens and discuss it as a part of the arrival of a new technology called mixies and grinders which are electrically driven. It has to be seen as a part of the general economic growth, education and the change in approach towards life. It also changes the equations in the gender relations though not in a very visible way. Grinding stones were in a way a sort of stones around the necks of the women. If you see, the traditional societies where women were supposed to do the manual works, were always connected something made of granite or stone in general. The worshiped at the stone edifices, they washed the clothes on the washing stones, made batter in the grinding stones, drew water from wells standing on the stone planks, women even urinated with their legs placed on a pair of stones. The stone therefore becomes symbolic of their cowing down by the burden of the household works. Hence, the arrival of the mixers should have been welcomed wholeheartedly by women in those days. 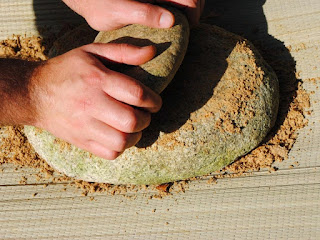 Definitely, the stone became soft as far as women were concerned. One after another life style products came into the houses via the television advertisement. This was what exactly happened in 1950s in the United States of America. The soap operas (the present day television serials) were created for selling soap powder. Women watched these sob stories and watched the advertisement where beautiful looking women keeping the homes so clean and impeccable only to receive their job-worn husbands with a smile, a deep kiss rising on the toes and then a cup of tea. The clothes that he wore should go straight into the washing machine. So washing machine became the central theme of happiness for women and to use washing machine you needed soap powder. That mean with the advent of each commercial product women all over the world become the slaves of it; only difference is that the heaviness of granite stone is changed into the softness of the products and the sentimental anchoring of women to home and relationships. This has reflected in the making of architecture too. Women, like Virginia Woolf had once asked, never ask for a separate room for themselves anymore. Instead they ask for a place to keep the washing machine, a power point for the mixie, a double door refrigerator, a separate work area for kitchen so that the kitchen also could be flaunted the way they do with the drawing rooms. 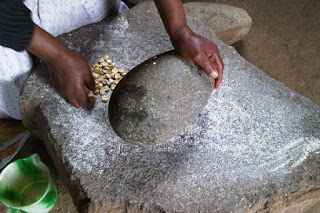 With the grinding stones going out of focus certain jobs also ceased to exist. There used to be stone cutters travelling from one place to another, making grinding stones and selling it in the local market. They have stopped now moving or working in large scale. There used to be people coming from unknown places by cycle calling out ‘Ammi kothaanundo Ammi’ (Anybody wants their grinding stones to be tended?). This maintenance of the grinding stones is done by making pin point incisions on the surface so that the surface of the stone remains a bit rough, making the grinding fast and fine. These men and women who used to make these stones ‘rough’ did it with such care and love that they made floral patterns on the grinding stones and the stone rolling pin. They took a paltry sum and some snacks and left. It took another year for them to come back as they know that those stones did not need weekly tending. There are so many trades and jobs like this that have gone into oblivion. However, I remember these stones with fondness and the music of those grinding stones still take me back to the good old days when boys and girls ran through many kitchens in the villages.
Posted by JohnyML at 12:27 PM