About 'Madhuri Dixit', an academic monograph by Nandana Sen for the British Film Institute 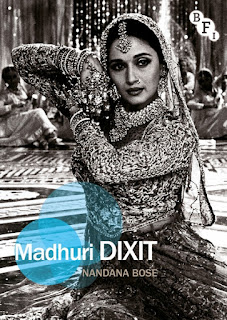 Had it been any other aspirant of Bollywood stardom than Madhuri Dixit she would have ended up either in some B-Grade masala movies or as one of the side actresses (in saheli/friend roles) in the highly forgettable movies that came out during 1980s, dubbed as the ‘most degenerated phase’ of Hindi films. Madhuri Dixit was determined to stay there and was destined to be the reigning queen for almost a decade and more. Madhuri Dixit, unlike the legendary actresses like Vyjayantimala, Hema Malini and Sridevi had/has the edge of being a Maharashtrian/Marathi that has been one of her rights to claim the top position for a longer time than the other actresses. Madhuri, when debuted in mid 80s was a girl who was there just to try her luck but successive flops made the talented actress in her so determined that she did succeed at last!

That’s how generally success stories are packaged in wide-eyed writings on the film stars that are churned out periodically for mass consumption. But the book ‘Madhuri Dixit’ is an academic monograph and has an absolutely different story to tell. Written by Nandana Bose, former professor at the Department of Film Studies at the University of North Carolina Wilmington, USA, this monograph is published by the Bloomsbury for the British Film Institute. In this delightful read academic analysis intersperses with the well-known film trivia pertaining to Madhuri Dixit and the inferences give an absolutely different picture about the star actress who had literally sweated it out to make to the top. A powerhouse of talent and an indefatigable experimenter, Madhuri in her hundred and fifty odd films took out all what she could muster up from her talent repertoire but by the time she started her post-marriage second phase in the Bollywood film industry, felt that there was much more to be explored in her. This book does not tell us a lot about how she managed to stay afloat and afresh delivering box office success after success for a long time but it does speak a lot about why it all happened.

In Bollywood, actresses who come in as outsiders (those who do not belong to rooted film families and production houses) are either taken under the wings of powerful actors or are mentored by established directors. In both the cases, the young actresses are seen as ‘mistresses’ or ‘girl friends’ of the chauvinist actors. The protective cover that they gain through the associations with male actors comes with a price of being them called as ‘home breakers’ for most of these males are married, or as lose characters. Madhuri did not face either of these blames and could survive as a ‘pure Marathi middle class woman with traditional values’. Nandana Bose argues that it is not just an actress’ talent that helps her to be but the definite extra-corporeal support that she gains at the initial stage of her career. Madhuri was lucky to have one of the prominent directors, Subhash Gai to come in as her mentor. Boney Kapoor and Anil Kapoor were her well wishers (despite their close association with the then reigning queen, Sridevi) and the junior Kapoor even shared his efficient personal manager Rakesh ‘Rikku’ Nath with Madhuri. This could save the actress from many shames that could have come along while negotiating with roles and business deals with the male chauvinist members in the filmdom.

Nandana Bose delineates how Saroj Khan, the iconic and legendary choreographer in the Bollywood film industry literally ‘shaped’ Madhuri into a performing body and a ‘text’. Also Khatoon, Madhuri’s hairdresser also had played a pivotal role in keeping Madhuri away from unwanted and unwarranted exchanges and attentions. The book also deals with Madhuri as a text and how extratextual cultural indexes and markers worked for her in making her stardom more alluring and pristine. An actresses who steer cleared all the gossips regarding her possible alliances with male actors always had the ‘pure middle class woman’ image on her side. She gave value to the existence of the middle class girls and her fashion statements became the fashion statements of a larger female population among the Indian middle class. Her body was open to male gaze and it was always in a male desire induced dream that her skin was exposed not in ‘reality’. The apparent vulgarity of her ‘dance’ movements that had created a lot of controversies however did not touch her personality because it was always either for keeping ‘rama dharma’ that she did those acts or always it happened in the wet dreams of the males which she never had the agency to stop. 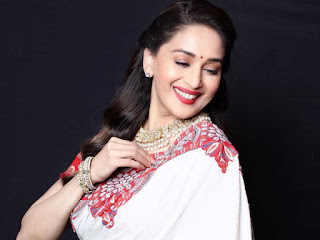 The author also probes into the construct of the ideal middle class Hindu woman as portrayed by many a Madhuri character. Each time she moves out of the decorum of a middle class Hindu woman, her characters very carefully and cleverly get back into the fold without challenging the patriarchal structures. However, Madhuri Dixit has acted in a few movies which had strong feminist undertones, like Mrutyudand, Gulabi Gang and so on. Madhuri’s marriage with Dr.Sriram Nene in an arranged marriage though had broken many a heart in India, redeemed her into the minds of the very same ‘Hindu’ men and women who thought that Madhuri could retain the virtue of the mythical Sita who eventually got united with ‘Sriram’ Nene. Madhuri’s second phase starts with her appearance as a judge in the reality shows, advertisement icon and then her coming back vehicle, ‘Aaja Nachle’. Nandana Bose says how her image as a dancing star reiterated itself in the film’s narrative and later proved it to be the mainstay of Madhuri’s new avatar as an entrepreneur in the digital interfaces keeping ‘dance’ as the center of her business discourse. The extra-textual associations have always come to help the Madhuri myth going in the transmedia interfaces that she chose to play with. She also very skillfully adopted herself into the social media platforms by engaging new age agencies to work for her, assuring her image is always there in the public not only for star gazing and inspiration but also for scrutiny.

Though academic in nature, this monograph is really a page turner both for the informed reader and someone who delights him/herself in film trivia. Reading of this book makes you go and have a relook at the works referred in this book, which I did quite devotedly and it has proved to be another added dimension to the understanding of the book’s narrative, the subject’s life and the very zeitgeist of the Madhuri movies which not only created the Madhuri icon but also symbiotically created a cultural situation within which the Madhuri transgressions could be enjoyed and contained.
 JohnyML
Posted by JohnyML at 6:40 PM