Meet Bhupesh Kavadia, an artist who turned an arid land into an artist’s H(e)aven in Udaipur 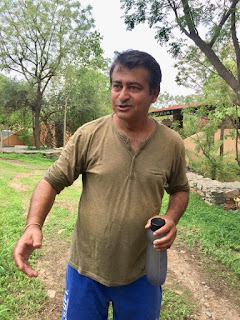 Bhupesh Kavadia dropped out at the school final year. He thought he was not cut to learn things in the conventional way. Then Udaipur, the city of lakes became his university. When he chanced upon a few theatre activists in the city in 1985, he realized that he had a true calling for stage. Acting took him to places and for a school dropout like him it was a ‘strange(r)’ experience in the beginning to talk about names like Albert Camus, Bretolt Brecht and Samuel Becket. But characters devised by them found expression through the acting medium of Bhupesh. 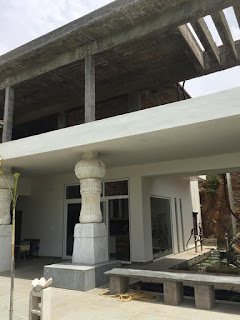 His theatrical expeditions also involved making sets and props for the stage productions and it was then he realized that he had a ‘thing’ for three dimensional sculptures. Papier Mache gave way to clay and he moved to harder materials like granite and marble. Bhupesh did not know that he was slowly turning into a sculptor. Stage gave him two things; a sense of space and an affinity for emotions and ideas made tangible in sculptures. Then came the now notorious art boom. Bhupesh’s marble and granite works found their way to many a collection in India and to his starving coffer came gold glittering in. The money he made out of his sculptures was invested into establishing a gallery in Udaipur which did not have any gallery till then. Part of the fortune was invested in buying a few acres of arid land, undulating and unapproachable. Then the land became the field of his artistic experiments; first he became a forester but planting so many rare and wild trees and then designing the place according to his whims. 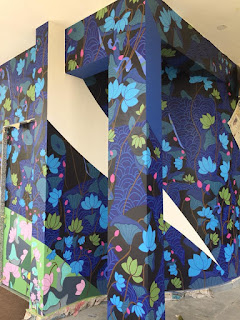 Today, askew land looks like a boon by nature and the sight of Aravali hill ranges and the green vales at a distance and near gives away the feeling of a cool hill station. The edifices that are coming up based on Bhupesh’s plan and the expertise of local masons (Bhupesh has not sought the help of architects or structural engineers. He seems to be going by instinct and practical experience) stand evidence to his sense of space. There is a homely space and also an academic space where you have a library and study room. The sprawling kitchen doubles up as a meeting place and a space to whip up a feast as well as some juicy gossips. There are waterbodies and stretching over them are cottages in blown up scale so that the resident artists could feel space, light and air all the time. One of the cottages has curvaceous walls and Bhupesh says that the cottage developed along with the carving of the land. Bhupesh has employed the traditional building techniques of Rajasthan that give an impressive texture and volume to the buildings. 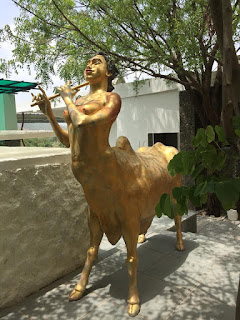 There is a sprawling square that for the time being houses the large scale marble and granite works of Bhupesh, which in fact need city squares or corporate courtyards for permanent display. They are not commissioned. Nor does Bhupesh know where they would go eventually. He collects scrap granite and marbles from quarries and converts them into sculptures. He has also made a foundry space for bronze casting. Bhupesh has a good collection of sculptures and paintings; the collection proves that sculptures are his first love. Udaipur could be attractive for the artists in the coming days because of art spaces like Bhupesh’. “I could have moved to any city. But Udaipur gives me ideas which I could put into practice and this space is such a realization of a long time dream and it is a dream in progress,” says Bhupesh. A must visit art space in Udaipur.
--JohnyML
Posted by JohnyML at 6:45 PM