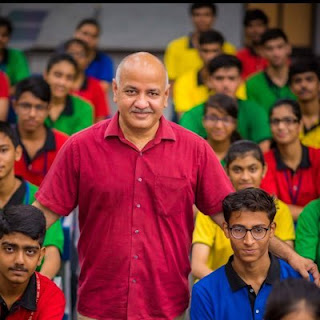 Shiksha means Education. Manish Sisodia is Delhi’s education minister. When Aam Admi Party came to power in 2015, the condition of Delhi schools was abysmal. Private schools were minting money in the name of quality education and other facilities. But they have been functioning like extortion rackets than educational institutions. Private schools in Delhi and the NCR literally looted the parents. Things changed when Manish Sisodia, himself the son of a teacher, took over the education minister.

Allocating one of third of the budget for education was the first step that the AAP took when it came to power. With social and educational sector activism experience to back them up, the leaders of the AAP thought it was important to focus on the educational quality of Delhi schools apart from providing basic facilities like water and electricity for controlled rates. Qualitative changes that the AAP government brought about in Delhi’s public life have become the focus of the international agencies and education sector is one such field that got phenomenal make over not only in terms of infrastructure but also in terms of teaching practice. 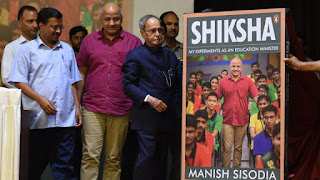 Sisodia made some surprise visits to the schools run by the Delhi Government and found that they were the most neglected field in the whole state. Taking many agencies, primarily the principals and teachers into confidence, Sisodia and his team undertook a mammoth task which they have completed successfully within years and now even the international educational agencies visit Delhi schools to find out how they are run effectively and how they have brought educational brilliance out of the children especially from those who come from the weaker sections in the society.

Infrastructural development with world class furniture, classrooms, buildings, toilets and so on complimented with the making the temporary teachers permanent or brining their salary scale at par with the permanent teachers and giving more economic power to the principals changed the functioning of the schools. Teachers as well as students and their parents found a new purpose in education. Today there is a steep rise in the number of students getting admitted to the government schools in Delhi, making the private schools rethink about their fee structure, educational facilities and above all the managerial arrogance. 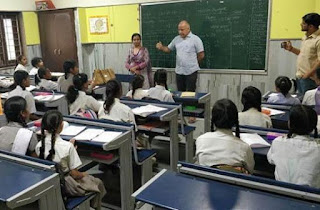 (Manish Sisodia in a class room at a Government School)

‘Shiksha’ is a book by Manish Sisodia and he collates his experiences as the education minister of Delhi in the book without giving too much stress on his personality; instead he presents the tricks and magic of changing the educational scenario with the help of the teachers, parents, ministers and bureaucrats. The collective efforts have brought in finer and commendable results. He also speaks of the AAP Government’s will power and willingness to facilitate the changes. One of the first changes apart making more budgetary allocation was creating School Management Committees for the welfare of the schools. Also the schools were advised to appoint Estate Managers who were responsible for the regular upkeep of the infrastructure. Parent Teachers Meet became a regular feature and whenever children needed emotional and intellectual counselling, it was immediately given. Mentor teachers were selected from among the teachers who volunteered to serve the educational scenario in the state and also teachers’ delegations were taken to the foreign countries to get a firsthand experience on the teaching standards. Teachers with specific purpose in their lives and dignity given to them in their career gained confidence and their involvement became pivotal in the success story of Delhi schools. 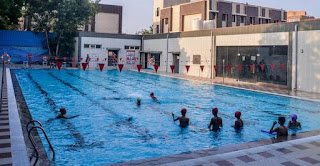 (A Swimming Pool in a Government School in Delhi)

The book ‘Shiksha’ is a must read manual for all the teachers and educationists and bureaucrats who really want to facilitate positive changes in the field. This book is written with hard data and experiential narratives blended in the right proportions. Manish Sisodia, the author has kept his ministerial power under check and has presented himself more like a benevolent activist who has some sort of executive power in his hands. However, he says how his plants at times get thwarted by the bureaucratic hurdles, especially when it comes to the allocation of funds. Cutting down corruption in the education field is one of the reasons that made the success feasible in Delhi’s educational domain. Even for the general readers this book has got some light to offer.