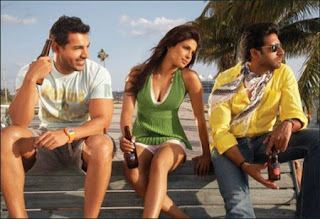 I have lost my innocent eye. May be twenty years of constant interaction with art and its related theories has made me look at things in their stark symbolism. Anything and everything come with an ideological undercurrent. Things are not as innocent as apparently they appear.

Watching Bollywood movies is a favorite hobby for me like any other Indian. Whenever I watch a movie, I deliberately try to see it with a pair of innocent eyes so that I can flow along with the narrative without thinking much about the ideological undercurrent. But old habits die hard. Certain movies, which are successful in box office, make me watch them with my ‘trained’ eyes and I find these movies upholding all those retrogressive and conventional characteristics of Indian society.

The other day I watched one of the most successful movies of our recent times, ‘Dostana’ (Friendship). Produced by Karan Johar, who is famous for his ‘blasphemous’ approach towards tradition, ‘Dostana’ is advertised to be a ‘pro-gay’ movie. The story line is simple. Two guys, Sam and Kunal, enacted by Abhishek Bacchan and John Abraham respectively, want a paying guest accommodation in Miami. They find a place but the ‘guys’ are not allowed there. So they find an easy way; pretend to be a gay couple. And they do get accommodation there. Neha, who is a relative of the land lady, staying in the same apartment, mixes freely with these guys as they are ‘gays’ and finally realizes that they are not gays but normal ‘guys’ who have fallen in love with her in due course of events. But by that time she is already in love with her boss who is a widower with a child. She marries her boss and the ‘gays’ are happily left to lead their ‘guys’ life further.

I am not a film critic. However, I would say this movie is all about an imagined orgy. It also symbolically represents the Indian male’s perennial desire to have multi-partner sex. Pepped up by comic situations, the narrative runs smoothly, entertaining the audience to the hilt. As the viewer knows that these ‘guys’ are not ‘gays’ but just ‘hunks’ pretending to be gays, the sexual tension exist in the relationship between them and the girl, Neha (played by the sexy Priyanka Chopra) is transported into the mind of the viewer, forcing him to take it as his own sexual tension.

The movie is an anti-gay movie mainly because the guys’ entry into the apartment is mediated by their affected ‘gay’ identity. That means, two women can stay with two strong built guys (with all sexual potency suggested through the well built body of John Abraham and the bearded manly face of Abhishek Bacchan) without causing any social scandal only because they are gays. Symbolically, this suggests that gays are just ‘people’ who are ‘without’ any kind of emotions otherwise felt by the heterosexual people. Gays are just harmless people, devoid of ‘sexuality’. Their sexuality, which is as strong as any other heterosexual man or woman, is nullified ideologically by presenting them as ‘harmless’ people. It is something akin to the masters speaking their private matters in front of their drivers or servants. The human identity of the servants and drivers are in a way erased by the master’s conscious decision. In this movie, these two working guys (John as a professional fashion photographer and Abhishek as a male nurse. He is constantly asked whether he needs to wear small skirts when on duty) are almost reduced to the level of drivers and servants by the master narrative handled by Karan Johar.
It is a comedy because, they are not gays but they are masquerading as gays. And in this masquerade, they always fall into such situations that evoke comedy. In short, what the viewer get is this message: the gay situations are comic situations because they are excluded from the gravity of the master narrative. ‘Gays can do only comic act’ or ‘the gay acts look almost comic to the heterosexual human beings’- the underlying message is very clear. As these hunks are acting as gays, with slightly exaggerated physical movements, we are forced to separate the identity of the real actor from the character he is ‘forced’ to act even while being another character. Hence, the gays we see in their enactment are excluded identities, which are ‘excluded’ specially for slinging comic mud at them.

The master mind behind this movie has taken careful efforts to endorse ‘gay couple’ as a socially accepted couple. This is a surreptitious technique within the narrative to tell the people that whatever portrayed in the movie is ‘progressive’ and ‘goes’ with the attitude of our contemporary times. The social integration or acceptance of the gay couple comes through when Sam’s mother (played by the buxom Kiran Kher) initially disparages her son’s ‘gay’ identity and later accepts it with traditional verve (look at how she puts sindoor on John’s forehead and places a poorna kumbha before his feet to be toppled by his right feet as an auspicious gesture of ‘entry’). However, the viewer is not allowed to see it as a serious gesture as the mother (unlike the mothers in Bollywood moives) always responds to the situations in comic way. Her identity as a mother is reduced to that of a comedian (a take off from Om Makhija’s mother, again played by Kiran Kher in the blockbuster ‘Om Saanti Om) thereby excluding her right to be there as a ‘real’ mother in the grand narratives of Indian movies.

There is a reason why I call it an orgy and Indian male’s perennial desire to have multi-partner sex. Both Abhishek and John, despite their affected gay identities, are, in reel life and real life, potential hetero-sexual human beings. Priyanka Chopra mixes up with them the way she would mix up with her female friends. She does not have any problem to wear a bikini and walk before them and even lay amidst them in her skimpy clothes. The gaze of these affected gays is always on her body, when she ‘naturally’ does her exercise regime in front of these guys. Her butt, tits, navel, lips and all those sexual zones are constantly gazed at by four pairs of eyes, those of Abhishek and John. When Bobby Deol comes as her boss, one more pair of eyes is added to this gaze game. She is an open dinner to be devoured by three sexually potent guys. What else, it could be if it is not the desire for multi-partner sex or orgy? Interestingly, Neha never recognizes the fact that she is gazed at or used by these males. She behaves like an innocent babe, who is unaware of her sexual potency. Isn’t it the Indian male wants from the woman of his desire, an innocent yielding to his physical fantasies?

Neha, however modern, working and educated she is, eventually is a woman in the man’s imagination. Her independence and identity as Neha the working girl, Neha, the modern, urban and educated woman is simply nullified as she is not able to understand her own social position, her own identity vis-à-vis the males around her. Even after she knows that both these ‘gay’ guys make sexual advances to her, she decides to marry her boss, who is a widower and a father. Why? Because, the movie reiterates the ideological make up of Indian social psyche: the woman must be under an economically powerful male, who is stable (he is not promiscuous even after the death of his wife) and sexually potent (as he is a father he has the capacity to produce another generation, which both and John and Abhishek are not capable of in the story). She is bound to marry a male who is not cunning and deceitful (like the gays?).

This anti-gay movie further insults gays by presenting a superior officer in Neha’s office (played by Bomman Irani) and an Immigration officer (played by a western actor) as gays. Both of them are in their comical best, making advances to the masquerading gay couple, namely John and Abhishek. The ambiguity of sexuality is quite palpable here as even the males want such kind of ‘males’ (like John and Abhishek). Their ultimate desire is to have/be the perfected bodied manly men. As they are incapable of gaining it, they can indulge in comic interludes to satisfy their fantasies and desires. The sexual ambiguity (as a device to remind the viewer constantly that what you see in John and Abhishek are not real gays but real men) is enhanced when Abhishek is ravaged by a group of middle aged women in a kitty party organized by the landlady, while John has his rendezvous with Priyanka in an open air theatre, which plays a sexually confirming movie, Kuch Kuch Hota Hai by Karan Johar himself. This is a symbolic extension of their male virility as endorsed by the history of ‘movie’ itself.

This movie is very important as a case study because it clearly shows how, despite all our gay freedom demonstrations and carnivals, law making, social debates etc, our society still wants to ‘progress’ in the twenty first century with all its traditional baggage. As far as the young generation in India is concerned, Karan Johar is a very influential film maker. The success of his movies shows his undisputable reach into the minds of the young people. But again, by such a reach, what he affirms is his belief in the traditional thinking regarding the same sex relationship in India. This beautiful gay bashing in the form of Dostana should also be seen in the light of Karan Johar’s public declaration that he would be getting married soon. Karan has been a popular gay icon (along with the ambiguities of confirmation and denial of it) since the birth of new millennium. He made a movie in which Shah Rukh Khan and Saif Ali Khan played roles that had the shades of gayness (This potential gay attraction is made use by the organizers of one of the Film award nights, a few years back, where Shah Rukh Khan and Saif Ali Khan played the roles of hosts and they openly flirted on stage. Also, the same sexual ambiguity is played out in the advertisement for Airtel, where Shah Rukh Khan teaches Saif Ali Khan to say ‘I love you..in hearts’. Only in the last moment we come to know that it was a rehearsal for a voice SMS meant for Kareena Kapoor. By collapsing the projected sexual identities, reel and real life of the actors, the gayness is made into a potential product only to be desired in the realm of consumption but not in real personal life). Even Shah Rukh Khan and Karan Johar were rumored to be having a gay affair, while keeping their ‘sexually potent male identity’ intact.

I enjoyed watching Dostana because after a few minutes of its starting, my ‘not any more’ innocent eyes could see the ‘real’ narrative taking shape under the wraps of a glittering gay story.
Posted by JohnyML at 10:02 AM

i totally agree with all that johnyML has said about this orthodox film by karan johar, which is totally insensitive to homosexual drives. in fact, there is no homosexuality shown in the film, as it had been shown in 'brokeback mountain'. since there is no homosexulaity in the movie, it is very ridiculous for karan johar to say, "we have to deal with homsexuality".
furthermore, karan johar's attempts to create a 'karan johar history' within the movie with intertextual references of songs from his previous movies is too self-congratulatory. notwithstanding, like johnyML, i too enjoyed the film for its antics.