The Pub Culture that We Need Urgently 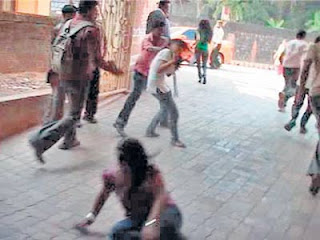 Union Minister for Health and Family Affairs, Dr.Anbumoni Ramdoss is also finally against the ‘pub culture’. The ruckus on pub culture started almost a week before when a group of youngsters rushed into a pub in Mangalore, Karnataka and roughed up the boys and girls who were enjoying their drinks and friendship. The television grabs showed how these ‘morally upright’ youth physically assaulted girls and the boys who opposed the attack. These ruffians belong to a splinter right wing party called Shri Ram Sena (SRS). Pramod Muthalik, a former RSS, Bajrang Dal, Shiv Sena leader is behind this ‘anti-pub’ movement. Rajasthan Chief Minister Ashok Ghelot (Congress) made a public statement that pub culture was anti-Indian. The same sentiments were expressed by the Karnataka Chief Minister, YS Yeduriappa. National Women Commission is the only agency that came out against the attack and expressed its wish to involve in the case suo moto.

So with the Union Government also endorsing the views of a former Bajrangi Dal leader, we are now left with only one option: approach the court. And we know Indian courts are famous for the slow delivery of justice. Perhaps, Indian democracy is still functional because our legal system is slow enough to let things take their own course in the name of democracy. Otherwise, in which country the judges of the courts would refuse to declare their material assets!

Now let us come back to the point. The pubs are attacked because the young people, especially the girls, go to these pubs and consume liquor, which is supposedly against the ‘true’ nature of Indian tradition and culture. I don’t know where exactly it is written in our traditional scriptures that consumption of liquor is against Indian culture. But the logic here is simple; women should not go to public. The Hindu right wing fundamentalists do not directly demand purdah system for the Hindu girls. But I am sure it is in the offing. Today it is liquor consumption. Tomorrow it is jeans and top.

The incident has happened in a place, which is a few hours drive from Bangalore, which is the IT hub of India. Also it is one of the world hubs of international IT trade. Bangalore is famous for its pub culture. That is the great Indian irony. Because of this pub culture no social problem has arisen so far in this city. In all the metro cities in India, girls and boys go to pub and this ‘tradition’ has never resulted into a social or cultural calamity. Then why now, suddenly everyone is against the pub culture?

It is an indication that we are turning into a puritan state. The government would tell us, from behind the sophisticated and silken curtains of liberalism, that we should not allow our girls to go to pubs and clubs. Then after a point of time, they would decree that the girls should not go to malls and cinema halls without accompanied by a family member. Then they would order that the girls should be seen in public places with purdahs on. Then they would make laws to punish girls seen alone in the street. Any girl could be accused of having loose morals, therefore punishable in the coming days. This is how the Talibans made their laws stringent on their citizens in Afganistan. Is India turning a Taliban state fast that too without a so called right wing government at the helm of affairs?

Dr.Anbumoni Ramdoss is famous for his anti-tobacco campaign. Now he is against liquor consuming also. But these arguments so far are done in a very abstract way. It started off as ‘anti-pub culture’. Slowly, as I said before, it will turn into ‘anti-liquor’ and ‘anti-women’. Ban on public smoking is one thing. However, ban on pub culture is another.

Pubs are a bit more liberal places where, like in a restaurant, people mind their own business. Some people would drink there and some may not. If a boy and girl drink, dance and enjoy music together, it is not going to affect anybody’s life. Altercations can spring up in pubs. But doesn’t it happen in legalized bars? Doesn’t it happen in temples, churches, holy places, streets and cinema halls? Why only pubs?

If pub culture corrupts the Indian youth, then the government of India should ban 99 per cent of the consumer items in the market. They should ban all the movies. They should ban art, literature and fashion. All these things ‘corrupt’ the young minds with ‘ideas’ than a few glasses of beer would.

We should see the larger picture of things. When the general election is round the corner, such issues would drum up the support of the conventional vote banks. Pramod Muthalik who sent his supporters to a pub in Mangalore had been an aspirant for Lok Sabha election tickets in the previous elections. He was spurned initially by the RSS, then by Shiv Sena. His reason to start his own political outfit and create this ruckus is simply for fame and publicity. He can create a vote bank for himself through such obnoxious activities.

This is what exactly what Neeraj Jain did in May 2007 by attacking the works of Chandrasekhar, a final year MFA student of the Faculty of Fine Arts MS University, Baorda. Jain was seeking an assembly election ticket and he wanted the attention of the BJP higher ups. Hence, he took up an issue with the works of Chandrasekhar. He attacked the works in the name of Hindu morality. Gujarat was about to have the assembly elections at that time and Jain thought that he would create his own constituency by creating a moral-ethical issue. Though he did not get an assembly seat to contest, he could gather enough fame and support, which he would use in the coming years.

By playing into the hands of petty politicians like Muthalik and Jain, responsible leaders like Dr.Anbumoni Ramdoss and Ashok Ghelot are doing a disservice to the country and its secular and diversified fabric. It is high time they think that we want a Taliban state or a secular democratic country where people could exercise their rights (including the right to visit a pub irrespective of gender) freely and without fear.

We need to establish more pubs and attract more young girls and boys so that we can feel that we are living in a country with an egalitarian attitude. Isolating the moral police and giving them less space in media is the best way to keep them away from repeating such acts of vandalism in future.
Posted by JohnyML at 2:42 PM

Congrats Mr. Johny. I share your views.
it is the individual, whether boy or girl, to decide to go to a pub or club, which exists based on the law of the land. Organisations like Siv sena, Ram sena etc has has no business to interfere. Not even for Govt.

Citizen deserves lot more freedom from the social and administrative establishments, to evolve a civilised society.

I do agree that what Ram Sene did was all cheap gimmick. Recently, one my journalist friend explained how Shiv Sainiks approaches the Electronic Media much before making an attack on youngsters on Valentine Day. It pathetic to notice the increased criminalization of politics. We need a Obama too