A Warning to Warner Brothers 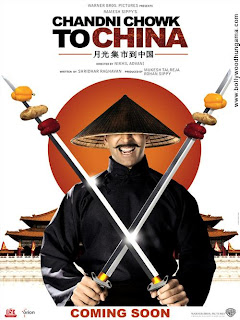 We are in twenty first century. But Warner Brothers think that we Indians are still in early twentieth century, when traveling film projectionists showed films for us. They showed the moving visuals in the temporary tents and announced, ‘Now the train is coming.’ ‘Now look it is Vittoli coming by a horse.’

We, then knew, a train was coming and Vittoli was coming on horseback. But then there was no sound track. So some sonic interventions by the projectionists were needed. Above all, they believed, as a primitive people we did not understand the visual language. May be in retrospective, we are ready to take such arguments. Fine.

But what about ‘Chandni Chowk to China’, a much hyped film with Akshay Kumar in the lead role? It is produced with a budget of Rs.80 crores and is heavily funded by the US based film company Warner Brothers. The trade pundits say that including the publicity expenditure, the total cost of the film is a whopping Rs.100 crores.

India has the dividend of population. The surplus population does not indicate enhanced work force and labor capital alone. It indicates the power of consumption too. If a minor section of the people decides to watch this movie, then also, Rs.100 crores and more will be collected with no difficulty. So the Warner Bros does not have any problem to fund such a movie.

But my problem is not that. In the globalizing scenario, any multinational corporate can invest in Indian ventures and ethically speaking they should be invited to do many more investments like that. However, my problem is with the attitude with which they went through the script of this film. I am sure that they would make several layers of scrutiny before they decide to fund any such film.

The story line is simple: Siddu (Akshay Kumar) is a struggling cook at his father’s (Mithun Chakravorty) small restaurant in Chandni Chowk, Old Delhi. He behaves like country bumpkin and falls for all conmen who predicts his future. Meanwhile, in China the followers of a slain warrior Lu Shung are waiting for him to reincarnate. Some China men find the reincarnation of the warrior in Siddu and take him to China. There he goes through several problems finally to emerge as a great kung fu fighter by defeating the villain Hojo.

Khalid Mohammed, the film critic had rightly pointed out that the story is line strangely resembled the famous animation movie, Kung Fu Panda. There is no dispute about that. But then, the treatment of the whole film is also like an animation movie that primarily considers kids as its viewers.

So when you watch this movie, ‘Chandni Chowk to China’, you find yourself as a stupid child, who is ready to lap up anything shown to him in the name of comedy (kids would kick my ass for making a comment like this. These days kids are very intelligent).

You find a pack of fools going to China and meeting a pack of aggressive fools there. So basically two sets of fools fight each other to take prominence in the hierarchy of fools. Warner Bros looks at the Indian viewers and Chinese viewers as two sets of fools who would make this movie a blockbuster only because this temporary super star Akshay Kumar is in the lead role.

Akshay Kumar acts like a clown. When he emotes he looks like a real stupid. Certain roles suit him and when he is at the hands of good comedy directors like Priyadarshan, he could emote well. Here the director Nikhil Advani has completely failed in direction or controlling Akshay Kumar.

Basically this movie treats the viewers as stupid jokers, that is my primary problem. And second, the ideology of the movie re-iterates the patriarchic notions of the society, which the new age India desperately wants to do away with.

Here we have an Akshay Kumar fighting for the legacy of Lu Shung. Before that he is treated like a kid by his father Mithun Chakravorty. Then Mithun lays down his life for saving his son’s life. Later exhorted by his father’s ghost, he fights to save the lives of one Chinese inspector who sires two female interests in the story played by a single Deepika Padukone. One of the Deepikas fights for the villain (to protect another man) while the other Deepika serves as an adrenaline jet pump. Finally, Akshay Kumar fights for the ‘male rights’.

How long our mainstream films work on the male chauvinist themes? And how long they treat the viewers as stupid kids?

Trade pundits say, the film will not collect as expected. If it does not collect that shows, the Indian audience is matured enough to spurn such ‘anything goes’ attitude.

Ghajini of Amir Khan is a super hit because it shows that Indian people still has suppressed violence against those people who make them temporary amnesiacs.

Rab Ne Bana di Jodi worked moderately and saved Shah Rukh Khan’s face because Indian audience still imagines in split living; one in the real world and one in the fancy world. And still they have not forgotten the transcendental spirit of love.

Chandni Chowk to China is a blot on the Indian screen. With all due love for Akshay Kumar, I would tell him, stick to his talents. Don’t behave like a bumpkin and make his fellow Indians feel like hating him.

Warner Brothers is still welcome to Indian screen, but with much more cosmopolitan and egalitarian scripts.

We became independent in 1947. And we opened up our economy in 1991. We have a history and great talents.

Remember that before you fund any stupid films like Chandni Chowk to China.

(I thank Mrinal Kulkarni, my wife and art historian for telling me that Chandni Chowk is nothing but a product of political plot to frame Indians and Chinese as grinning fools, by the Western ideologues)
Posted by JohnyML at 12:04 PM