Ramdas Tadka goes Behind the Shadow of Big Bose 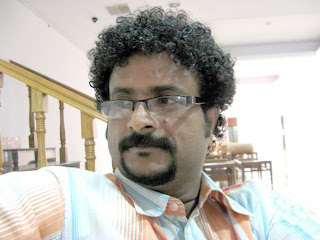 
Ramdas Tadka passed away on 13th September 2010. He was a professional artist and when he succumbed to cancer at 43, he was an assistant professor at the Nagpur Fine Arts College. Tadka was a classmate of Julius Macwan and Bose Krishnamachari at the J.J.School of Art during late 1980s. Julius Macwan was a close friend of Tadka and knew well how this artist had wished to be a part of the contemporary art scenario.

Unfulfilled dreams of the people who pass away are often fulfilled by those who remain. Julius felt that it was his duty and karmic responsibility to do a show of Tadka’s works which he was not able to exhibit when he was alive. Till the last moment Tadka was giving a fight to the disease and working to mount a solo show. The paintings were his last act and for Julius it was his first mission to showcase his friend for the people. The show was inaugurated on 12th September 2011 at the Jehangir Art Gallery, Mumbai. To supplement the show, Julius came out with a book titled ‘The Other JJs’. This book consists three long conversations between Julius Macwan, Sudarshan Shetty, Bose Krishnamachari and Jitish Kallat. 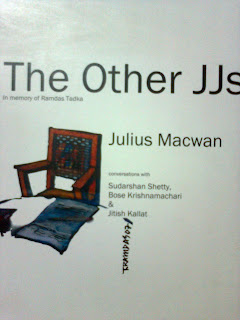 (The Other JJs - cover page)

The other JJs. A wonderful concept. It could have brought out the essence of the JJ School of Art bridging the hiatus between the English speaking mainstreamers and the vernacular speaking, vernies. It could have been a great book. While Julius Macwan’s effort remains quite commendable, the content of the book fail to do justice to the concept and the title, ‘the Other JJs’. Let me justify my critique.

Sudarshan Shetty sums up JJ of his times, that is of the early 1980s. For Shetty, JJ was attractive because there were a lot of beautiful women around. He came after doing his B Com. Shetty did not like his commerce studies because he felt he did not belong to the stream. He did not want to become a painter because he never thought that there could be a vocation in painting. But it was natural for the river to flow to the sea. Hence, Shetty reached the ocean called the JJ School of Art and he could, while remaining a constituent drop, prove that he is also a sea, but a different one. 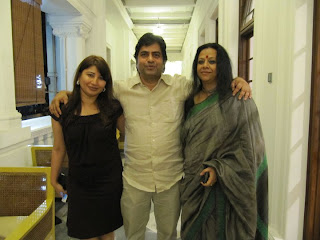 Shetty is candid as usual in his takes. He did not know Tadka directly so his conversations revolve around the milieu that defined the aesthetical practices prevalent in Mumbai in general and at JJ in particular. Also Shetty reveals how there was a divided atmosphere between the English speaking and the Vernies. When we read between the lines, we come to know that vernies are pre-destined to go into the gutters of oblivion. But Shetty could cross over to the other shore with sheer determination and effort. And as a man who has never lost his sense of balance Shetty is always on a look out for those vernies who have disappeared from the scene. And at times, at odd contexts they just drop in from somewhere, with a sense of guilt and sense of awe written largely over their faces. Shetty speaks his mind about abstraction and portraiture. He also tells Macwan about how the teaching methods were quite mechanical in JJ at that point of time. 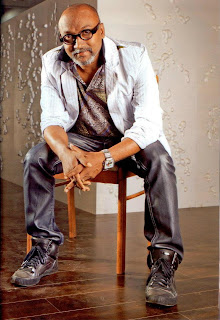 Then we come to Bose Krishnamachari. And as we keep listening to the story of Bose, we tend to think that we are reading a book about Bose not about Tadka. Instead of talking about Tadka and the other JJs, the othered JJs and the othering JJs, Bose makes himself a hero of the times and Julius plays along with supporting comment. What the reader expects from this section of conversation is the elucidation of the binding concept of ‘the other JJ’. Macwan and Bose could have gone deep into defining the dynamics that constituted the other JJs. Was Tadka a loner among these others? Who were the others? Who were those faces that are now curiously appearing along with the recognizable faces of Bose, Macwan, Kallat and so on in Facebook and all?

When a photograph appeared in Bose’ facebook account a few months back, I saw a few faces that were more confident and bold than the face of Bose with his downcast eyes. Bose soon made it his profile picture. In the book too, we see Bose sitting like a loner with other loners including Tadka and Rajendra Kapse. Bose might have been trying to find his foothold there amongst the friends and as the story goes he did find that and he became quite popular amongst the students. In the conversation he reveals that and he calls that JJ is constituted by migrants and it is like a village with the canteen as the village square where people gather to chat up with each other. Bose was a great motivator. 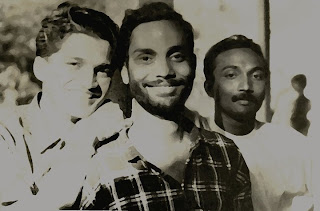 (an old picture of Bose -behind right- posted by Ravi Joshi)

However, when we read through, we feel that Bose replaces the whole of other JJs with his own glories and hagiography. At one point he says that he knew only two languages when he came to Mumbai: English and Malayalam. Those people who have interviewed him in innumerable journals and television channels know for sure that Bose has time and again said that he knew only one language when he came to JJ first time and that was his mother tongue, Malayalam. Suddenly Bose wants to shift his position to a cosmopolitan from the very beginning there by opting out and surrendering his citizenship in the world of the others in JJ.

This falsified notion of a winner from the very beginning makes the conversation of Macwan with Bose a bit uncanny for the reader. And in due course we see Tadka and people like Tadka disappearing from the scene, therefore a total erasure of the other JJs, and the glorious picture of Bose coming up there like a hoarding. Once we finishing reading this part, we really ask what was Tadka like and how did he feel amongst these ‘towering’ personalities of his times? And what was Tadka’s work all about? This book has a lot of reproductions of Tadka’s works but there is none to tell the reader why Tadka’s paintings are like this? The book could have served this purpose. 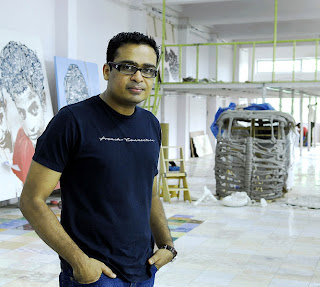 When we come to the third part, we see Jitish Kallat speaking his mind. Kallat was not a part of Macwan’s batch. Hence, ethically speaking he is not supposed to delineate the qualities and characters of Tadka as a person or as an artist. Instead, as intelligent he is, Kallat speaks about the pedagogic distinctions and comparisons that existed as a general backdrop for the students like him at that point of time vis-à-vis those of the JJ School of Art and its arch rival, Fine Arts Faculty, Baroda. Kallat also speaks about the rebellions that his generation of students brought forth within the JJ School of Art. Interestingly, Kallat is asked to face the interviewer, Macwan, after the latter had conversed with Bose Krishnamachari. Hence, for Kallat too, Bose’ claims become a point of reference and there occurs an internal need for not contradicting or not disclaiming the positions that Bose has already taken. 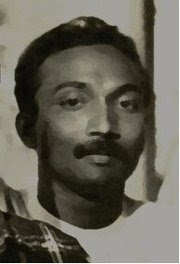 (Bose- a false profile? from FB)

There is no doubt Bose had been a powerhouse student when he was there in JJ. Like a true migrant he had tried his best to stick his neck out. He was the other JJ but today in retrospect, he wants himself to be out of that otherness and claim a predetermined allegiance with the mainstreamers. Bose still remains a powerhouse today. But he has pawned his ethics to do things bigger even if it goes against the primary principles of democracy and our Gandhian legacy of non-corruption. Otherwise, how a person who claimed to have boosted up the morale of many, now consume Rs.10 Crore for a trust that has constituted with people with no history in the field of art and kept everything away from public scrutiny? 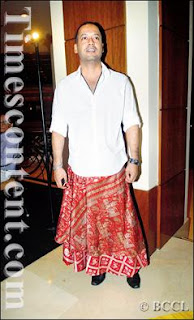 History is a bitch (and bastard too) at sometimes. When the winner writes the history, the vanquished ones loose a chance of utterance. In their muted position they are as dead as Ramesh Tadka, even if they are living today. I wonder why Macwan did not interview one of those losers and ask them to articulate their own otherness. Only face saver of this book is a post script written by Prof.Prabhakar Patil who had taught Bose, Tadka and Macwan when they were foundation students at JJ. As a conclusion Patil writes: “Ramdas had multi dimensional personality- talented artist, committed teacher, a nimble dancer, great mimic, loving son, caring husband and more. Considerate, energetic, perseverant and hardworking, he has always viewed the brighter side of life- till destiny cheated on him, snatching him away forever even as Mumabi was deep in the midst of the Ganesh festivities. Ramdas, who, once upon a time painted portraits of the dead for a living, was now himself the past. Visiting his Worli home to offer condolences, the digital photograph of a smiling Ramdas in front of me became a blur as I struggled to hold back my tears…” 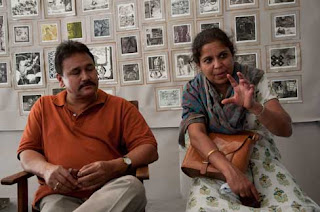 
Had this note of Prabhakar Patil not been there, this book would have been clearly passed for a project devised and funded by Bose Krishnamachari. Julius Macwan is a well meaning person and despite his odd sense of dressing (he wears a skirt and sleeveless shirt at the art openings), he is forthright in his life and in his works. Had he intensely felt for the concept of the book, the other JJs a bit deeper, he could have come out with a fabulous documentation of the life and times of JJs since 1980s. 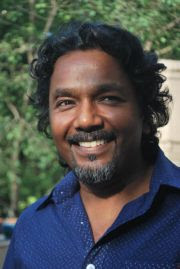 I thank Mukesh Panika, the director of Religare Arts, who officially released this book, for bringing a copy for me from Mumbai and carrying it always in his car till he met me in an art opening and handing over it to me with a smile in his eyes.
Posted by JohnyML at 1:17 PM

An incisive piece that respectfully gets into peering within the persona artists create and pass off as having been integral to their beginnings. It is awesome to see Macwan bring, The Other JJs together to showcase Ramdas Tadka. This is certainly very rare in India, and Johnny ML has also done a splendid take ij writing about the book. Johnny ML is compassionate, yet lays bare human/artistic mores, concerns with their individual trajectories—in seeing how the artists invited to speak of Ramdas Tadka essentially use the book, perhaps inadvertently as a platform for themselves. In a sense, I dare add—it is also very christian and gracious in acknowledging Tadka’s being, drive and hopes, much as Julius Macwan set out to do. The invited artists have all been there, done this that and the other, yet clarity is missing. The reason for their being part of the book seems to be clouded. Essentially success has not eluded them, but something called “Kalatmik manuski” has. Having said that this is not an affront but rather a nod to the survivors an African proverb, “until lions have their historians, the hunt will always glorify the hunter.”

Wow! What a great book and great piece of Review Johny!!! Seems, as if condolence meeting was mistaken as a preview party!!!