(a scene from the Udayagiri-Khandagiri caves)


History silences you, not the kind of written ones but the remnants of it preserved by the state. For many, history and its preserved ruins are touristic opportunities and with the photographing devices in the hands of everyone they capture a piece of it, making it a backdrop of their mortal lives in a given point of time. The silence that one feels at the ruins of history slowly lifts and one understands how the purposes of it change with the perspectives of people. An edifice, a cave and ruin in whichever shape anywhere in the world tell us not just how they were during the times of their origin but how we are like this today. Climatic erosions mix innocently with political erasures over which burdened by the insignificance of their lives young and merry making visitors inscribe their names and phone numbers, a commemoration of the primordial instinct of the human beings to leave a foot print wherever they go, for the sheer desire of immortality. Standing there I feel contemporaneity so breezy and ephemeral; like an image consigned to the dustbin to make space for more flimsy images.

I am at the Udayagiri- Khandagiri caves in Bhuvaneswar, Orissa. Carved further to make forest refuges out of the natural caves that were available in the twin hills named Udayagiri and Khandagiri, the Jain Monks in 2nd Century BC could manage thirty three caves altogether some elaborately carved with Jain parables and some with minimum architectural embellishments. The Buddhist and Jain monks used to take refuge in such caves during the monsoon months and did their studies, meditation and art. One cannot expect the monks carving out the caves all by themselves taking time off from their meditation schedules. That means there were craftsmen and architects among them or guilds with special skill sets to carve caves and narratives on rocks in remote hills with a strong faith in not only what they were doing but also in what they were doing it for, the religion. Involvement of artisans, artists, architects, labourers and so on automatically informs us about the itinerant societies that might have formed around the construction sites, definitely with women, children, service providers of many kinds including sex workers of both the genders, and above all the patronage as the monks were not wealth creators. While the history of such sites reduced into a few clumsy lines on the white letters on the indigo background information plaques placed by the Archaeological Survey of India tell us about the patrons, nothing is said about the people who had actualized the dreams of the kings as wells as those of the monks. 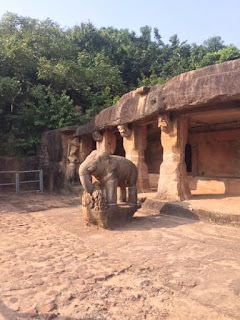 Mobile phone cameras have already disabled the ability to ‘see’ and in its place everyone seems to have developed a capacity to ‘look’ for an impactful backdrop in anything, the historical sites are not such exceptions. Before the advent of mobile phone cameras also people used to take photographs as a part of their memory making. There used to photographable points in the historical and touristic sites which the rotigraphers (photographers who work from such sites offering interesting images that they claim to be impossible to capture by the amateur photographers, for a pittance) exploited for their livelihood liked the guides who add their own versions of history over the actual history (is there one?) at times completely presenting an imaginary narrative that would make the visitors to see the places as the abodes of divinity. Mobile phone cameras have made these ‘spots’ irrelevant by find more curious angles and backdrops with their mobiles phones propped up on selfie-sticks, which I prefer to call as ‘narcissistick’. Democratization of image making in a way has divested the very act of image making of its authority and made it mundane and irrelevant with ill conceived and aesthetically derivative images floating everywhere (including the social media). Perhaps, such liberal proliferation of images helps the aesthetically inspiring and sensibly taken pictures to live through time. In Udayagiri-Khandagir hills I see this unbearable enthusiasm for pushing oneself into every frame that he/she takes; a clear reflection of high capitalism in our country that makes everyone to indulge in excess, ephemeral, ego and greed.

I am taken to Orissa by Kshitish Das, an artist turned traditional art promoter who is instrumental in creating an organization called Raghurajpur International Art and Culture Exchange. Orissa is a land of culture and one could see it everywhere. Significant in India’s history in many ways including the great conversion of Emperor Asoka into Buddhism after the Kalinga War in 2nd Century BC. One could see the appropriation of caves, temples and other edifices with Buddhist and Jain origins by Hinduism by the 10th and 11th century AE after Sankaracharya’s efforts to re-establish the primacy of Hinduism in the 9th Century AE. A highly religious state but with limited fanatics doing their rounds in the streets, Orissa still has its costal glory with palm fronds and expanses of rice fields greeting you everywhere. The ugliest thing that destroys the beauty of the streets of Orissa is the humungous presence of blood red bill boards that advertise the 4G connection provided by the Airtel. The business war between the mobile service providers seems to have completely taken the streets with each company displaying its product through colour coded hoardings and billboards turning the streets into a war zone. Only thing conspicuous is the absence of an Emperor who would see the blood bath of telephony business in the streets and would convert himself and his people into a religion which prefers silence and endless hollow conversations. 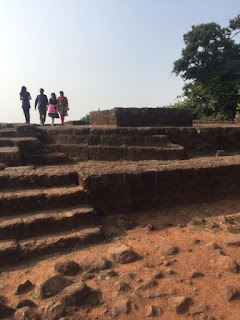 (a Jain temple excavated on the top of the Udayagiri hills)

Economics is a framework and a parameter that the societies perceive their lives, ideate and formulate their various aspirations. Though we know that economics is a part of social establishments and was resulted by the creation of societies, where it had played the role of social contracts that bonded people with the authority as well as divinity sooner than later it became the prime force that maintained the societies and helped them in evolving to the contemporary forms. This created various classes and also the distribution of economics/wealth differently among the people resulted into social hierarchies. However, economics was not the predominant ‘theme’ in the earlier societies. There used to be periods in the world history where religion, art, culture and so on had played the dominant roles that oriented people towards enhancing the cultural wealth than finances. But today we are living in a society which has no other point of reference than economics, and it is going to remain so. To create a difference in the thinking process of the people and to take them out of the tracks of economics and place them on a different plane where travelling is possible even without a vehicle, we need to rework on the very idea of a structured and systematic society. The moment one goes out of the system and functions differently perhaps a different life is born; the birth of a different life ushers in the birth of a new perspective which could realize itself with minimum dependency on economics. We say there is no free lunch but we have to move from there to say there is lunch. Only problem in the statement is the word ‘free’. When a lunch is ‘not free’ your existence itself is not free.

In Orissa, in the hotels people serve rice on your plates with their bare palms (not with spoons). Anybody who has a sense of minimum hygiene could revolt at the very sight of someone serving rice with hands. I too ate from someone’s hand, so were many other people around me in a wayside restaurant called Pipli Daba. I thought I would not enjoy it (I would not drink even a glass of water if someone’s finger touches the rim of the glass) but I did take the rice from his hand, ate and enjoyed it thoroughly. I just did not think that where he was keeping that hand just before serving me the rice. I could push that thought because of two reasons; one, many people were eating rice served by him with his bare hands and two, there is a tremendous amount of faith in that very act of eating the rice served by someone with his bare hand. Of course, he looked apparently healthy and clean. But I would like to give a great value to the faith aspect of it; a person is serving food and you are accepting it. That is the bond of faith and it highlights your level of acceptance and tolerance. You are eating something you are familiar with; the difference is the way it is served. If human beings could have faith in the other in a given situation and also they could show a higher level of tolerance and acceptance, every problem faced by our societies would evaporate. Moving out of a system is important which would transcend the ideas of economics and developing faith in human beings by becoming tolerant (to the beliefs and customs not really to certain irritating behaviours) are important not for the perpetuation of the society as we see today but for the inauguration of one that has been lying dormant in our minds for a long time or to put it in other words, for paving the way for the truth, faith and beauty in you to manifest in the world.
Posted by JohnyML at 9:17 AM