A Musical Instrument Carrying the Politics of Bamboo 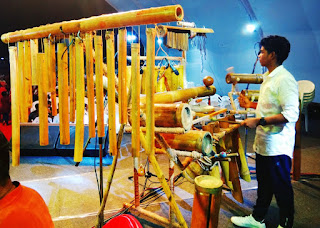 (Yet to be named Bamboo musical instrument created by Jayachandran Kadampanad)

Folk singer, actor and the Director of Folk Life Academy, Trivandrum, Jayachandran Kadampanad is quite elated about his new invention; a composite musical instrument made completely out of bamboo and leather. For many years Jayachandran has been experimenting with sonic properties of bamboo from different parts of India. Traditionally bamboo is used in/for making various types of flutes or similar musical instruments and it has been an integral ingredient in both folk and classical music. However, using bamboo exclusively for making a composite musical instrument is a new experiment which has found its process and shape in the imagination of Jayachandran. 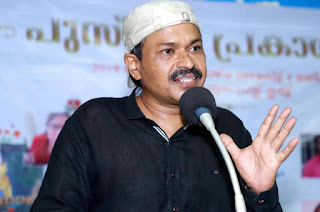 Of late Kerala has been witnessing the birth of so many folklore musical group, each vying to find its sonic and visual space in the vast array of musical traditions in Kerala. Late Kalabhavan Mani’s efforts to popularize folklore and folk songs were hugely successful because of his unbeatable energy and talent. His performances and the ability to set the folksongs both traditionally collected and newly composed within the popular and contemporary digitally orchestrated musical genre had found patronage more than he himself had expected and had opened up reality shows in the television channels in Malayalam carving out special segments for folk songs and performances. Taking the popular and populist cue many music groups came up not only to preserve the folk music traditions but also to use the genre as a vehicle to convey revolutionary ideas within a conventionally rigid society like Kerala. Presence of Dalit voices in literature, theatre, films and music during the last two decades was unavoidable and the folk music groups became an integral part of the subaltern socio-political and cultural discourse in Kerala, perhaps becoming strong with the music of Jassy Gift (2004). 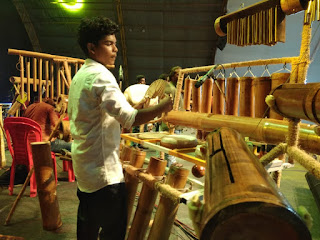 This genre of music has by all means thwarted the hegemony of the erstwhile popular folk music set by the upper caste modernist poets and musicians and the inter-state and intra-state musical influence, especially of the street music, death music, protest music generated in states like Maharashtra, Andhra Pradesh and Tamil Nadu has considerably changed the complexion of Kerala’s folk music scenario brining more and more young people from the lower middle class and the working class background to form local bands and street side groups to innovate contemporary folk music and preserve the already existing ones. Vayali music troupe that uses bamboo as their main expression is one such folk music group with a higher amount market savvy sophistication. The folk singers of the Manaveeyam Veedhi in Trivandrum are another set of new age folk singers who use bamboo based music as well. 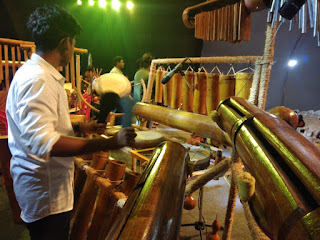 Jayachandran belongs to this tradition but often chooses to move as a solo performer within his band that has been using both the contemporary instruments as well as musical instruments made out of bamboo. But his extensive travels within in India and sojourn in places like Wyanad where one find an abundance of folklore and folk music have helped him to articulate a different kind approach in his music that involves various traditions including Kerala folk music, protest music and Bengal Baul songs and Rabindra Sangeet. While musicians like T M Krishna collapse the boundaries between the classical and the folk, rather challenge the classical cannons of music and take it to street, seashores and market places, we understand that the traditional approach to music is considerably pushed back by the new crop of musicians in the country, especially in Tamil Nadu and Kerala. 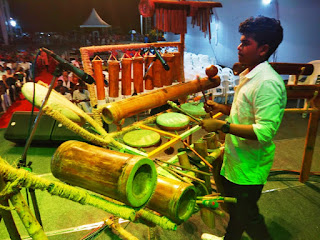 Jayachandran’s composite musical instrument is yet to be named. As it has bamboo components that functions as drums of various shapes, sizes and traditions, rattles, bells and symbols, it is difficult to name it offhandedly, says Jayachandran. According to him this yet to be named instrument has a politics to talk about; it is the politics of bamboo. Jayachandran underlines that there was a strong tradition of using bamboo for various purposes, including making huts, houses, daily utensils, furniture and storages, besides musical instrument. With the arrival of metal and plastic mediums the use of bamboo has gone down and it has deprived the workers in the bamboo sector of their livelihood. Though there are corporations and agencies to market their products and protect the bamboo workers, the workers’ conditions is pathetic as they are not able to find new markets, incorporate new needs through design innovations, enhancing their craft abilities through added learning for the contemporary times and in enhancing their own living circumstances. 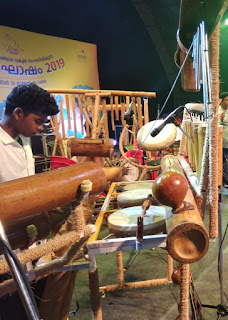 The politics of this composite musical instrument made out of bamboo runs in various directions. Jayachandran cites the two flood situations that ravaged Kerala in 2018 and 2019. Immediately after the floods everyone speaks of sustainable development and new architectural methods. Also they discuss a lot about deforestation and the need for protecting our forests. There are debates on how to prevent landslides. Each time, they find the solution in cultivating bamboos in the slopes in order to strengthen the soil layers and control the piping effect. Especially in the eastern countries bamboo is given a prime place in the sustainable development models. It is high time that Kerala too batting for its bamboo traditions. Jayachandran says that the motivation for this innovative musical instrument was the floods and the aftermath. Though he has been putting bamboo instruments together in his band for long, this is the first time that he has created a ‘full’ instrument. As the instrument is unconventional in nature, the grammar of its playing is not yet in place. That means a lot of innovation and experimentation from the musician who uses it. According to Jayachandran, a good percussionist could come up with wonders in this instrument. Also he is confident that the yet to be instrument could be played by more than one person at a time with a lot of coordination and practice. The instrument was formally inaugurated in September 2019 in Green Field Stadium in Trivandrum during the Onam celebrations. A young percussionist, Bipin Kumar played it and Jayachandran feels that he could climb great heights with this bamboo instrument.

Great. Support Jayachandran since he stands and sings for nature and environment. Article is very sincere. Thank you