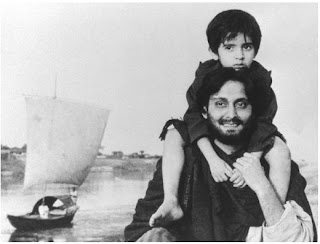 In December last I was writing a few stories about Indian contemporary art, and I was in Kochi, living alone in a rented flat.

I wrote throughout the day and found myself vacant and friendless during the evenings. Everyday I went for walking in the darkened alleys that run along an open drain infested with mosquitoes.

A friend had told me that those alleys were the haunting places of local goons and they attacked lonely wayfarers. Each time I walked there in the darkness, I waited for some young toughies to jump on me, attack me and loot me.

I wanted to fight them. I was imagining things and I took special care to be closer on the right side of the path as there were a few houses with dimly lit bulbs. I was a scream away from people and that thought comforted me considerably though I wanted some encounters with villainy.

Then came Friday. It is a norm or a rule that in India the films change on Fridays. A few Malayalam films were released on that day. I was desperate to see one of those movies as it had one of my favorite comedians in the lead roles.

Christmas time rush was visible everywhere. Even the dangerous alleys were peopled during the festival days. On Friday night I went to a theatre showing that movie. I walked all four kilometers between my room and the movie hall, stood in the queue and came back without making it.

It went on for three days. On the third day, I saw an old man coming into the lobby wading through the crowd. He looked as if he was carrying a heavy load on his back. And he was carrying one. It was his son, apparently in his twenties, with a demented look and unable to walk.

The man carried his son on his back and the boy clutched on him with his legs and hands. His head moved from one side to the other uncontrollably.

There was a determined look on the old man’s face. He had strong shoulders and arms, unusual for his age. People turned to them first with amusement, then with curiosity, which later gave way to an expression of pathos and sympathy.

The man was not seeing all those. He climbed the stairs and went into the darkened hall, to the movie, to the temporary happiness of two and half hours, with his burden- sweetness that turned into something un-nameable. How can you name the burdens of your own making?

I did not get ticket. I walked back to my lonely room. And in the alleys nobody attacked me even if it was too late and the burning bulbs had gone to rest.

I was walking with a stoop. The image of the old man and his son still hangs on my shoulders.

I noticed him first at the Badarpur Red Light. He was wearing a pair of gray trousers and a pale red shirt. He covered his head with a piece of cloth, tightly wrapped around like skull cap. He held a plastic cover in his left hand and on his right he was holding a three feet long piece of wood.

It was almost ten days back.

Anybody could have taken this man for a carpenter returning home and asking for a free lift from bikers.

On the second day, I saw him again. This time he was whispering something to bikers. Nobody paid any attention to him.

On the third day, I could see him clearly. He was asking for some change. He was begging.

I noticed his gray trousers getting dirtier and the shirt tearing off from the stitches.

The deterioration of a human being was happening there.

He did not look pathetic on the first day. As days passed he started looking pathetic, weak and sad.

Still he went near to the bikers and asked for change. I did not see anybody giving him anything. Everyone was expecting the red light to turn green and once the light turned they rushed off to their homes.

Yesterday, I was late and I was waiting for the red to turn green at the Badarpur border. The night had fallen and the sodium vapor lamps were already on.

I looked for the man. He was not there. I looked around and found him at the triangle island made at the traffic intersection.

He was removing his turban. I saw his salt and pepper hair. Wearily he sat down. Flapped the clothes a few times and folded carefully and kept next to him. Then he removed his slippers and stretched himself on the floor. The lights from the huge lamp post flooded on him.

A man decomposing in light. A living dead body.

One day, he too will disappear, the way the naked man under the bridge vanished from the earth.

It was green light to degeneration. I stepped on gas.

Years back I witnessed the following scene on a railway platform.

I was going from Baroda to Kerala. I reached the station almost an hour before. Watching people and see them going on with their lives, is one of the most interesting things one can do in life unless you get the feeling of being watched.

I saw this family, husband, wife and two kids sitting huddled together on the floor. There were a few benches lying vacant at the platform. However, they preferred to sit on the floor.

They looked totally relaxed and happy in their togetherness.

I noticed something in the mother’s hand. She was holding a pair of neatly packed sandwiches and two packets of Frooty. It was obvious from their looks that the food packets were given to them by some benevolent soul.

With untrained hands the mother opened one of the sandwich packets, split it into two equal halves and gave one portion each to her children. One of the kids nibbled at it, looked at it with a sense of disgust and returned it to her mother. She too did the same and passed the piece to her husband. He looked at it and took a small bite. Then he too disapproved of its taste.

Meanwhile the other kid handed over the sandwich without tasting it. Then the man asked the woman to open the second packet. The charade was repeated.

As they judged the sandwiches non-edible, they decided to try out the Frooty packets. The kids were trying to open the packets but in vain. So their mother tried. Sensing her plight, the man took the packets from her and somehow ripped it opened and tasted a bit. A sense of disapproval was still on his face.

The kids tasted it. Then the mother. Then the family together came to the conclusion that they should throw all those packets into dust bin.

The kids gathered the sandwich packets and Frooty packets and walked towards the dust bin and came back with the same expression of sourness in their faces.

Later the mother took out an old bottle filled with water. They all drank from it and waited silently for their train to come.
Posted by JohnyML at 2:50 PM 2 comments: