Parade of Our Own Collective Uncertainties: Paintings by Apurba Nandi 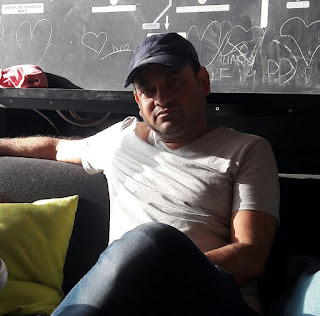 The timing cannot be better; Apurba Nandi’s solo exhibition titled ‘A Parade of Uncertain Destinations’ at Delhi’s Palette Art Gallery is right there at a historical juncture. With the images of the faceless and hapless people falling off from the landing gears of the rescue flights in the skies of Afghanistan fresh in memory, the faceless masses that mill around and about in pre-destined patterns in Nandi’s paintings look like fresh wounds that refuse to heal. These images of the human beings dig further into our collective memory that has by now reconciled with the atrocities meted out to the urban poor who were made to flee while the authorities asked them to ‘stay where they were’ during the pandemic lockdown days. 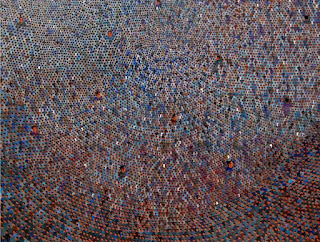 Meaning of a work of art largely depends on the readerly/viewerly intentions. One could take the works of Nandi for happy abstractions made out of human-like pigments a la late Chuck Close. Someone else could also take them for politicized citizenry invested with constitutional rights and protections that it assures. The age old theory of urban spaces being a flux where identities merge creating ‘unmarked’ bodies may not hold much water these days, especially after the onset of the pandemic that has changed urbans spaces more controlled, regimented, marked out, surveilled and if need be subjugated as per the needs of the authoritarian governments. 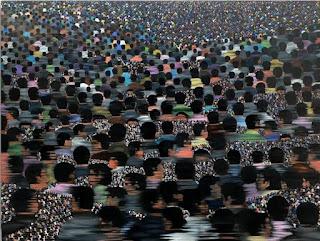 In Nandi, these human parades occur as a result of the lockdown woes. These works, I believe, embody an unresolvable helplessness of the artists’ destiny, which is not a collective destiny at all as common pursuits towards a single goal is never imagined or achieved through creative works but for the time being artists cannot but think of the human redemption from this unavoidable viral trap. The fate that has fallen upon the milling masses with whom the identification cannot go beyond the level of sympathizing through empathetic visualization, which is ironically a distant and still distancing way of engagement with the perils that are experienced by someone else, is never the fate of the artists in general. It is where the helplessness of the artists comes in; they could register the pain in their own terms or just be the callous witnesses. 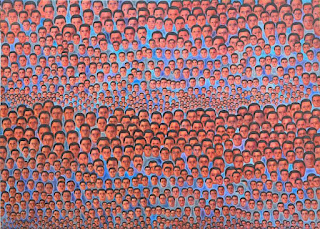 Whose parade are we witnessing while looking at the largescale paintings of Nandi displayed on the walls of a gallery? And whose uncertain destinies are they encapsulate in precise and fragmented frames? Artist here cannot be the documenter of the individual self of those people who have been rendered abstract not through the enforcement of state cruelties but through the very experience of them on the roads, dockyards, airstrips, fences and so on conveyed through mediatized images. These images in turn become another experience in itself that helps the artists and the people in general to visualize them in their given conditions. It is a complex process of experiential cognition, like a mirrored image of an affliction that could be seen in real if the viewer turns his or her head towards the other side. 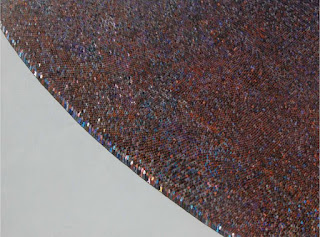 The reluctance that we as a survived lot feel collectively to look at the other side helps us to continue with our conscientious existence even in the midst of continuing atrocities. True, the uncertainty of the uncertain masses who have suddenly become intermediary human beings who could be received or rejected elsewhere cannot be given a concrete expression and if one does so it can maximum become press photographs that speak directly and move the viewers to unimaginable pain. Here art does something else; it mitigates the pain, sublimates the reality, reorganize the living human beings into acceptable patterns that not only edify one with their ‘social and art history’ but also entertain as affable art objects. 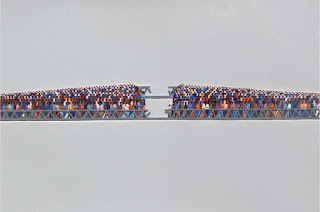 In that sense Nandi cannot do anything other than transform the human suffering into an affordable visual that could perhaps in the coming years speak of the sufferings of the human lot in a particular time in history, without really feeling the pain instead could make others exclaim about the abilities of a work of art to evoke history and the perils that it contains. This parade is an abstraction of the other and ironically the other is not the disenfranchised, dispossessed and disowned human beings but the artistic feelings for them, which I feel is the responsibility of art because art cannot do anything to assure a definite destination to these people. Art and artists can only display their own inability to do anything towards their rehabilitation. Nandi’s paintings are the parades of our own collective lack of empathy or sympathy; our own callousness is seen queueing up; these are mirrors held unto the viewers. 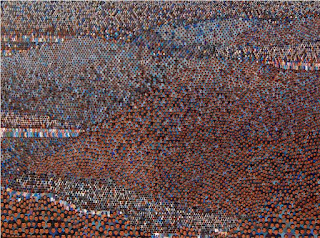 Art historically speaking, Nandi’s works evoke the memories of the early works of N.S.Harsha, who has done multitudes of people engaged in common activity like eating or sleeping. Through the repetition, the images are caused to melt and become a feeling, at times a feeling of absurdity. Nandi’s works, though they do not follow the color scheme or similar patterns that Harsha had used, still goad the viewers to connect with a contemporary master artist like N.S.Harsha. That is not a problem at all because what I emphasis while saying this is art’s inescapable indebtedness to its own past. Nandi subconsciously pays tribute to that past of our art.