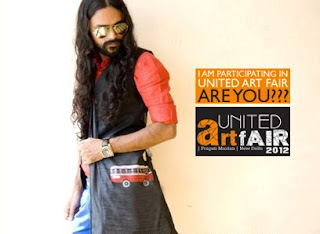 They say United Art Fair is a revolution. ‘Revolution’ is a word that had a different charm in the previous century. Today, anything that captures the human attention by force is qualified as revolution. There was a time when kingdoms were overthrown and despots were demoted to shame and gallows by the people’s movements. They called it revolution. When the word appears in history books they smell of printing ink; but in fact it has the smell of dreams, blood, pain, endurance and sweat. None sees that last rose petal crushed by a soldier’s boots or listens to the songs of hope disappeared amongst the jubilations of a happy crowd that marches to the newly captured ramparts of power. Today revolution happens if not along the streets and streams where people dip themselves into protest, in happens in the by lanes of virtual space. United by lawlessness and the innate rawness of human expressions, people congregate in the virtual spaces to share their ideas and aspirations. Like minded ones like them and those prefer to complain go to their graves in perpetual complaining; their epitaph is a negative status update. 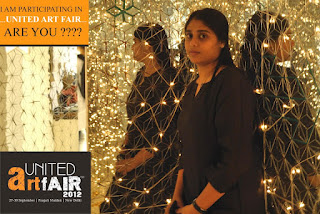 They say United Art Fair is a revolution. Yes, in a sense the UAF is a revolution. Many who got curious about the way in which I have used my facebook account along with those of my colleagues, asked me a simple question: how did it happen? Who designs the posters for you? How did you manage? Some said ill confident people and brands go for an overkill. Over advertisement is as bad as bad advertisement. But though I am not from the world of advertisements what I could say along the lines of Andy Warhol, there is no bad advertisement. People may dislike advertisements that intrude into their private spaces and imaginations. However choice of ignoring is limited in the days of late capitalism. You may not want it but you need to heed to it seems to be the new principle. Over advertisement is like that one single sweet dish that dominates the desserts after a sumptuous meal. You may not want it, you may ignore it, but you cannot destroy it. End of the day, you like it or not you tend to taste it at least from your finger tip or from the corners of the lips of your beloved partner for the night. 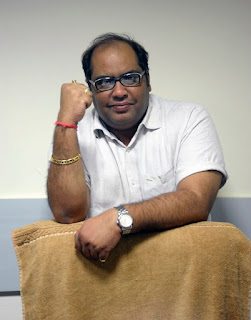 They say United Art Fair is a revolution and the advertising strategy that it has adopted is wonderful. I am going to tell you the story of this facebook advertising of United Art Fair. When we started off our city tours, may be after looking at my faded pair of jeans and the good old white Khadi kurtas and my dishevelled look complete with a beard and defiance in my eyes, perfect paraphernalia for the ones who had rolled into the city of Havana in open jeeps, many called it a ‘poor man’s art fair’. They did not see the Tiger like Annurag Sharma’s deep pockets. They saw only my past. I belonged to the generation of dinosaurs that preached revolution from the sidelines. Mainstream was for those wore green pants and red shirts and violet shades at night. I was happy that they called our fair poor man’s fair because Rajnikant was the poor man’s Amitabh Bacchan. Or he used to be called so. But in box office reality, Rajnikant is the top grosser than Amitabh Bacchan. So I kept quite and smiled whenever I could. Rest of the time I was talking to the artists along with my team. 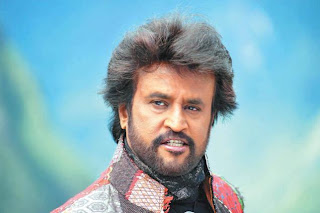 They say United Art Fair is a revolution. I believe anything that involves people is a revolution. Bollywood movies bring forth the idea of revolution because they involve people through desire and aspiration. The heroes and heroines, now even the villains or negative heroes express the aspiration and desires of the masses. Masses do not go to Switzerland to sing a song when they are tickled by romance. But they do go to Lodhi Garden to do the same. If they do not find gardens they go to Farmville and do the same. At times I feel chasing a lost pig is better than chasing a long skirt. People, that is the mantra of any revolution. United Art Fair is the people’s art fair. And where do people go to do to express their grievances and aspirations? Jantar Mantar is no longer attractive as it used to be. Government offices do not listen to the poor man’s wailing. Security has been beefed up ever since the lives of the leaders have become a threat to the common man. But in the government offices, in the staircases where nobody stops even to spit, they keep condoms in bowls. Government has found one way to control population; free distribution of condoms amongst the government employees as if the whole population problem is generated by the government employees in Delhi. 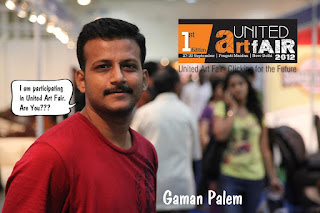 They say United Art Fair is a revolution. Yes, it is a revolution because it has involved the artists of this country; not the high priests and occasional gin drinkers. One day I was sitting and thinking about the advertising strategies one could adopt for United Art Fair. I was scrolling down the facebook, reading the tired status updates and funny photos of people. I remembered the Occupy Wall Street Campaign, Egyptian Revolution, India Against Corruption Movement, Free Binayak Sen movement and many other movements proliferated through the facebook. I realized that facebook is not about ‘I am having coffee in Berlin”, “Oh God I am back. Syria Was Horrible, Mumbai is the best” types. It is not even about those young anguished boys and girls who look for super dads and super mamas for a fling. I thought of using facebook to advertise United Art Fair. No I should say, United Art Fair artists. 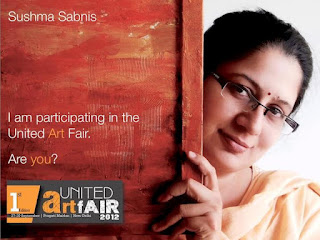 They say United Art Fair is a revolution. Revolutions remind you of beautiful and handsome faces. I remembered one of the most handsome young men in the country; Tarun Garg. He is my student at the National Institute of Design, Ahmedabad. He is a fashion designer by training and a photography artist by choice. And his wardrobe is so rich as I have seen it in his facebook profile. I just suggested him why couldn’t he say something about United Art Fair as if he were participating in it and what about you guys? He responded quickly with three different images with three different styles. I knew the picture parameters of appearance in facebook so I chose a vertical one so that the logo and Tarun are seen simultaneously. I posted it and it became an instant hit. I asked Tarun to organize a few more from his friends and colleagues who were participating in United Art Fair. Great. It happened instantaneously. 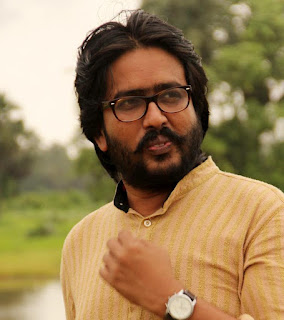 (Tathi Premchand- The man who styled the ads)

They say United Art Fair is a revolution. Yes, because artists were asking me whether I could make their posters also. Whoever asked I explained to them saying that it was a voluntary job. If they did the stuff and sent to me, I could upload it in my facebook account. One advantage with my facebook account is that most of the art personalities are my friends and it has crossed the permissible limits of friends. Besides I have almost 1500 subscribers. Considering the facebook and twitter accounts of celebrities from other fields this could be a negligible number. Though I am not a celebrity of sorts, this number suits me as I understand the power of viral information transmission as made possible by facebook or similar networking sites. 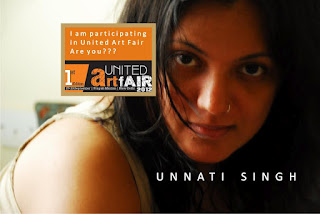 They say United Art Fair is a revolution. I know that I am not so handsome or a lady killer though many faint when they think about me. I believe that it is out of the dread than attraction. But for the first time I realized that artists were really beautiful people; they had really beautiful faces. Many friends approached them. They all wanted to advertise with United Art Fair. I asked them, Just Do it. Nike would pay me for saying that. Then it all happened. One artist came online and asked me whether she could put the advertisement as her facebook cover. Rules appear when crowding starts. Four legged would walk in two legs when two legged regime is overthrown by four legged and enter into a system created by the two legged. So I applied some rules there. I asked the artists, first you send the stuff to me, once I put up the advertisement in my facebook, you may do anything with that. I am sure that worked. 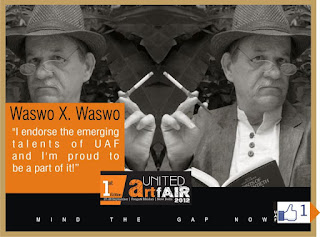 They say Untied Art Fair is a revolution. I understand that it is a revolution because it operated through a decentralized way. Though I am a despot of sorts when it comes to getting things done, I have always been lenient enough to let the things happen in a decentralized way. I asked artist friends to send me their ads they did it. After a point without asking it started pouring. One of my wonderful friends, Tathi Premchand, Mumbai based artist who prefers to call himself a ‘stupid blogger’ pitched into streamline the ads. He created ads out of pictures and that became the standard pattern for the rest of the artists to emulate. I found the whole strategy real fun. I just look at the green lights in my facebook. I ask him or her whether he or she knows photoshop. The moment they say yes, I forward them a picture from an artist who really wants to be featured in the ads but do not have technical proficiency to do so, and in three minutes time it comes back in the form of an ad and I upload. 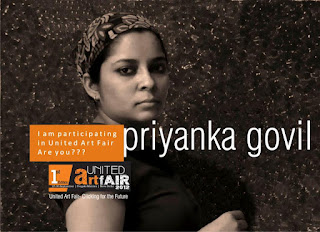 They say United Art Fair is a revolution. Yes, I remember my friend Unnati Singh, who has been relocated to Delhi recently cribbing, sitting in front of me and saying that her picture did not appear in the ads. While looking into her big brown eyes, my fingers worked on the key pads, I opened her facebook, chose one interesting picture, and found Tathi online, asked him to do the ad, and in two minutes, before Unnati could finish her god-alone-knows-what-subject-debate (I believe it always ends up in a hug and a smile of limitless friendship) I uploaded the ad in my fab. I turned the laptop screen to her and showed it. Her big brown eyes where craziness plays hide and seek with reason and always takes an upper hand in the game, widened. She was so happy. So far all the artists are happy because they all know they are participating in a movement, a revolution. 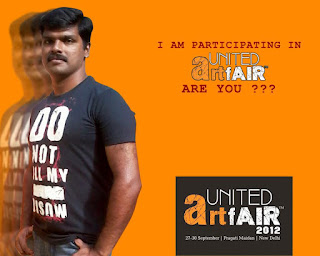