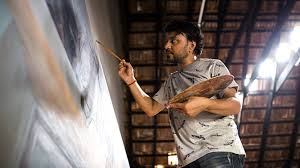 They are titled ‘History Paintings’. Slightly more than a foot in size these oil on canvas-paintings by Abir Karmakar, exhibited online in the GallerySKE platform, exude the cold neutrality of our times and their visual representations with edges blunted out of repeated mediating via various digital interfaces. They are history paintings because they frame the incidents that had happened in the recent, therefore contemporary history of the pandemic hit India. At the same time, they dispute the very conventional idea of history in which magnificent incidents find articulations in superlative terms, pushing the marginal events out of its frames. History is often created out of heroes. In this suite of paintings, history becomes applicable only in the context where the conventional history and these paintings share a sense of tragedy. 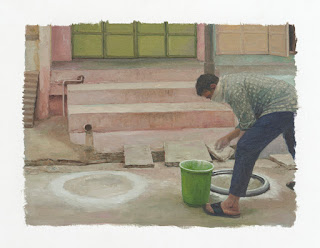 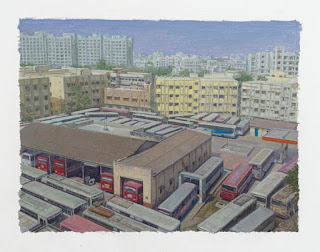 (History Paintings I and II by Abir Karmkar)

Tragedies affect people only when the heroic qualities of the protagonist in a narrative are forced collapse and the redemption seems to be keeping itself away because of the subconscious follies committed by the hero himself and the clever scheming of the antagonists around him. The fall of the hero brings in a sense of catharsis, leading to the purgation of ill wills and non-sublime feelings among the people who witness the tragedy. But here in the paintings of Karmakar, the scope of such tragic evolution is considerably curtailed due to the very repetition of a series of tragedies of the people who do not have any heroic qualities, and overlapping of sequential tragedies nullifying the previous ones with the unimaginable ferocities. Or it looks like that. But a curious perusal of the events depicted in this body of works perhaps would suggest a re-thinking about it. 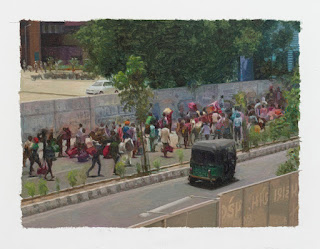 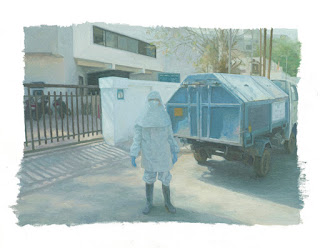 True, the events and the embedded tragedies, due to its relentless repetition as mediatized spectacles, have been rendered cold, failing to eke out cathartic responses from the people who follow the events through/by/in various mediums. The closeness of the devices in which the tragedies are perceived also has diminished the complex nuances of such a national tragedy, making it a repeatable, replay-able and troll-able (for evocative purposes only for the time being) spectacle. But what Karmakar does in this body of small paintings is something that brings the tragic weight back into the events that have otherwise lost their gravity. The protagonists of irrelevance in the national discourse of health and security, easily dispensable errand workers whose pain has never been a concern of the making of a contemporary nation and its resurgent nationalism and economy, military might and so on, are made into real tragic heroes by focusing his artistic attention on them. 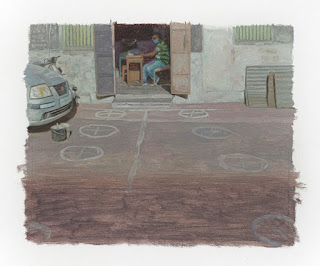 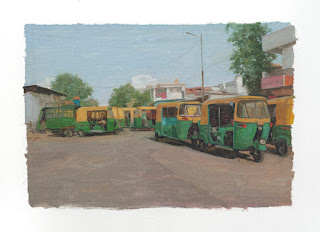 The choice of canvas and its size is pivotal in this discourse. They are small and done in oil. Size is what makes the viewer move physically; the smallness of it would bring the patrons and viewers closer to the works to ‘enjoy’ the cold pain that has been immortalized in the traditionally accepted medium of grandeur; oil on canvas. The insignificant subjects in the form of the migrant laborers, the abandoned spaces, the sanitation workers, ensnared laborers in the open under the blaring sunlight, man terrorized by the mere presence of policemen, social distancing made into reality through the spatial regimentation made out of chalk circles, closed shutters, empty railway stations and so on assume grandeur and magnificence like the historical settings in a literary genre of tragedy. Karmakar proves that history paintings need not necessarily be grand but small and significant through a special perspective. 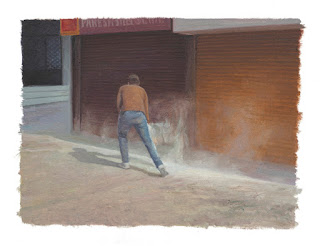 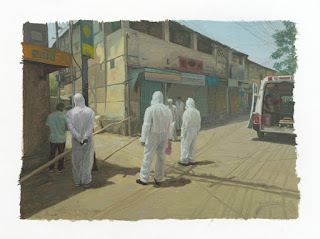 However, whose perspective is this that the artist is able to replicate in his paintings? None can particularly locate the origin of these pictures for many or almost everyone in the nation has seen them in this or similar angles, highlighting the same tragedy of the migrant laborers and places under precautionary lockdown. In history everything happens first as tragedy and then as farce. Each illogically rude punitive blow fell on the starved bodies of the people became a farcical repetition of the same ruthless event that evoked only subconscious reflexive jerks among the people who could stay ‘wherever they were’. Hence, the perspective of the paintings belongs to the unknown or unacknowledged photographers who have either published them in the media or dumped them in the social media. 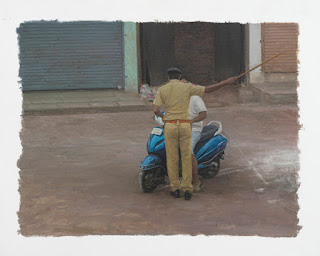 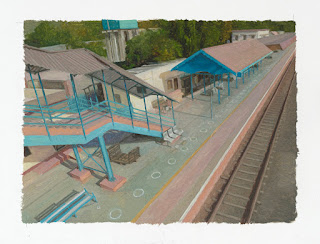 Karmakar not only adopts the images but also borrows the perspective of the photographer who created those images, which in the domain of artistic ethics is not a big issue (unless some photographer or agency comes up and raises a copyright issue). The real contribution of the artist here is the way he has rendered them and the choice of size and medium as I explained before. The treatment of color vis-à-vis the generic style of Karmakar is entirely different, emphasizing a sort of detachment from the very subject in order to avoid the indulgence of sentimentalism in his works. He has removed the real time from the works through the peculiar use of color which falls between ‘colorful’ and ‘black and white’. That is an interim time of either the gaudy space of Eastman color or the ill-processed pictures of early analogue color films. The removal of time earned through this color treatment makes the painting ‘historical’ as something exemplary denoting its efficiency to represent state’s impudence and ruthlessness anytime and anywhere in the world. 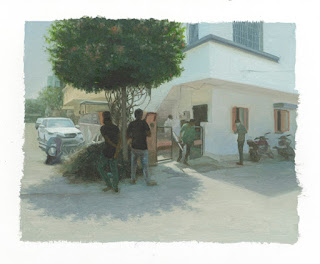 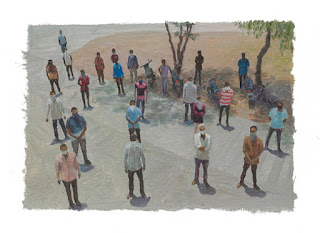 I would like to mention one more point regarding the practice of the artist, Karmakar so far. Perhaps, it is the time that has prompted him to take up such a series which otherwise in his scheme of paintings would be something alien and unthinkable. The pandemic has brought many to a different track of thinking; basically about people around us. The invisible became visible though many did not want it to be so. Mere charities wouldn’t have alleviated their terrible experiences and plights. Set upon in a re-thinking mode, many an artist has trained their eyes from the interiors to the exteriors of their concerned existences. Karmakar has been an inward looking person with an eye for his own self and could be easily called a painter of his subjective interiority both in the spiritual/identity related and corporeal terms. The pandemic has, temporarily perhaps, made him to look outside not perhaps through a frame of his own subjective perspective but as seen by somebody, efficient enough to capture the fact of the time. Erased off of all sentimentalities and exaggerations in which the country as well as the world revel in these days, Karmkar in this body works has been able to create art which in fact is ‘Pre-Truth’ in nature and by using a different kind of ‘mediatized realism.’

Posted by JohnyML at 8:33 PM No comments: