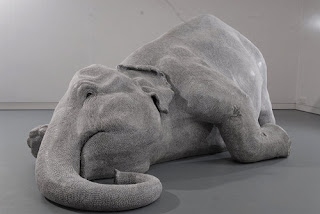 This formula, though not perfect, in certain ways suffices Indian contemporary art within India during the year 2009.

My idea is to trace the outline of Indian contemporary art events within India during 2009. The observations registered here come from a critic-curator’s perspective. There could be many events and aspects that might not find mention in this article. I invite critics all over India to fill in the blanks.

I would like to divide the year 2009 into two parts. I call the first part as ‘Recession Phase’ and the second as ‘Post-India Art Summit Phase.’

The year 2008 saw a phenomenal inaugural celebration of Devi Art Foundation, a contemporary art museum in Delhi (exactly in Gurgaon, Haryana in National Capital Region) initiated by the young art collector, Anupam Poddar. The celebrations had a metaphorical value as it showed all possibilities of an emerging art market.

The euphoria however did not continue for long as the talks of Bodhi Art Gallery downing its shutters clouded the art firmament.

As if the flood gates of Indian art were opened, the last months of 2008 were filled with art activities, gallerists saying that they needed to keep the ‘show on’.

January 2009, however painted a different picture. The so called ‘new and daring’ galleries went into hibernation. Collectors and dealers almost declared a moratorium on their funds.

The finest result of the recession phase was this: once again artists became accessible. As one young gallerist puts it, ‘Now we can see them and chat up with them; which was impossible during the last three years.’

Except for a few young galleries, only the established galleries could maintain a sense of balance. Shrine Empire Gallery in Delhi did a show titled ‘The People’ with Josh PS and Puja Puri (curated by me) in January 2009. Though it bit dust in the market, it was one of the few good shows that happened in India during the first part of 2009.

Recession Phase was a blessing in disguise as far as the art critics, curators and writers. Suddenly, with no scope of selling works, the gallerists realized the fact that there should be a re-assessment of artists, works and times. The Artist-Critic dialogues became a hallmark of this time. Along with several private galleries, Lalit Kala Akademy also initiated an artist-critic dialogue.

Responding to the international market changes, Indian scene also started giving added attention to digital and video art during this recession phase. Video Wednesdays @ Gallery Espace, curated by me, though started during the peak point of boom, had to wade through the Recession Phase to its successful culmination. Sixty artists and their ninety nine videos were presented over a period of one year.

Recession could have been a great opportunity for the government establishments like the National Gallery of Modern Art (NGMA) and the Lalit Kala Akademy (LKA).Unfortunately the NGMA, with its new wing with an old design did not find favorable response from the art community. LKA had to wait till the India Art Summit in August 2009 to enhance its actions, which were frozen for over a year, again due to ‘design’ blues.

During the Recession Phase many artists and critics started traveling within India with an unprecedented vigor. ‘Art Routes’ was one such efforts by me and artist friends Somu Desai and Feroze Babu. We visited eighteen small town art colleges to know whether the boom in Indian contemporary art had made any effect on their curriculum. The results of this visit could be seen in www.artroutes.in

One of the major build up shows apart from Video Wednesdays @ Gallery Espace Grand Finale was ‘Expressions at Tihar’ curated by myself and Anubhav Nath. Though the whole exercise of visiting Tihar jail with the contemporary artists started during the boom time, the momentum was steadily held up by Anubhav Nath throughout the Recession Phase to make it one of the most successful shows of the Pre-IAS times. Bhavna Kakkar’s ‘Re-cycle’ show was one of the huge hits of the Pre-IAS times.

India Art Summit made all the difference. First time, Video Art was given a special platform. Artists’ identities were made. Those galleries who had pulled themselves out of the international art fairs, put all efforts to make their presence felt in the India Art Summit. Shrine Empire’s Suchitra Ghehlot and Rob Dean’s ‘Princess Pea’ were the findings of the IAS.

The Post-IAS scene, which is currently on, interestingly shows a matured attitude. Though there are reports about fly by night curators (who are also respectable curators during the day time) making hay while the moon shines, many curated shows were quite appreciable. ‘Re-Cycle’ (curator-Bhavna Kakar), ‘Retrieval Systems’ (Ranjit Hoskote), ‘Marvelous Reality’ (Sunil Mehra), ‘If I were a Saint’ (JohnyML) were the well noticed shows of the year.

In the publication front, the year 2009 saw Art India Magazine still holding the number one position. Art and Deal celebrated its tenth anniversary. Bhavna Kakar announced ‘Take on Art’. Rajendra Patil successfully brought out the third issue of ‘Contemporary Art Journal.’ In the net space www.artconcerns.com still holds its position. JapaArtNews was the new entry in the net art journalism.

Bangalore continued to remain the ‘mother of all residencies’. Khoj expanded its boundaries to Periferries (Gowhati) and Khoj Bihar. Sandarbh continued with its activities in Parthapur and elsewhere.

The biggest art event after IAS in Indian contemporary art scene: The Inauguration of BMB Gallery, Mumbai by Bose Krishnamachari. BMB declares itself to be a link between Indian and global art. Second, Bharati Kher’s fortieth birthday celebrations in Delhi. 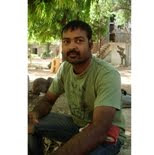 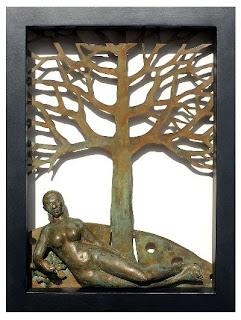 I remember you the way I remember all those who had left me at the least expected moments.
Posted by JohnyML at 8:44 AM 3 comments: