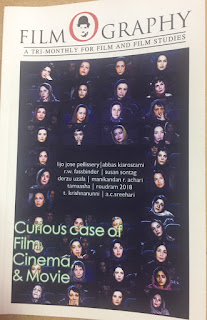 ‘Filmography’ is a new trimonthly bilingual film journal from Kerala. Initiated by a group of film buffs this journal aspires to tread an untrodden path that avoids film trivia and intends to give focused studies and insights to the regional, national and global movies. Innovative in approach and catchy in style, ‘Filmography’ is a re-run of the ‘little magazine’ movement of the 1970s and 80s for the simple reason that there is a niche space for it between the mainstream glossy film magazines and the highly intellectualized academic film journals. Recognizing the fact that the film journals produced by the government agencies, despite their well-researched content and attractive design and production, hardly reach the target audience except for their public availability during the film festivals, Filmography tries to fit into the gaps, complementing the discourses generated by the journals belonging to the abovementioned categories.

The first issue of Filmography, which was recently released at the 24th IFFK platform in Thiruvananthapuram gives the readers a lot to look forward to. Apart from the short essays by eminent scholars the journal has a few pages devoted for the lists of choicest films by international figures like Susan Sontag. Though subjective is the list, the reader could think of picking up a few for further watching in the available archives in their own localities. If not they could really debate the issue why they don’t have such archives in their vicinities. Hence, the journal does not simply impart information but evokes a sort of aspiration among the viewers/readers for bettering the immediate contexts of their film production-dissemination-consumption cultures and circuits. Besides, the editors have invited artists to engage themselves with the movies that have influenced them so as to redo or rather recreate a film poster of the same in their own fashion, opening up a way for the re-interpretation of the visual culture disseminated through the film posters that at times attain cult status. Sample story boards from classic movies sourced from the virtual archives reproduced in the journal make the general as well as academic readers know the films a little closer at the blueprint stage. 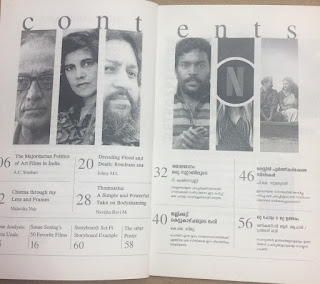 The first edition has an erudite critique on the majoritarian politics smuggled inadvertently into the parallel/art house movies in India as they cater to a global demand for an exotic orientalism or else reproduce the same ideology subconsciously in their movies. The essay written by the noted scholar A.C.Sreehari minces no words as he splices open the cinematic texts created by the doyens like Satyajit Ray. Though, there have been mainstream criticism on Ray for ‘selling Indian poverty at the global market’ Sreehari’s take is not on an accusatory level rather it works around the theoretical analysis of orientalism and its deeper encroachments in the cinematic imagination of the times. In the Malayalam section P.K.Surendran writes on the movies of the master Abbas Kiarostami. Apart from this wonderfully articulated article this section also traces the history of sound recording/sound design in an article written by the master sound recordist, T.Krishnanunni. A mandatory study of Jellikettu by K.G.Siju forwards a balanced view of the movie which has received more bouquets than bricks even when it should have been fifty-fifty. Malavika Nair’s take on film viewing is marred by the disturbing subjective presence. Navitha Ravi M does a review of the movie Thamasha using the feminist methodology in order to unpack the sexist body shaming. It should have been a deeper analysis, one thinks as he finishes reading it. My article on the film ‘Roudram 2018’ by the award winning filmmaker Jayaraj is also included whose merit should be analyzed by the readers and critics than I myself saying adulatory words about it.

The journal ‘Filmography’ is edited by Dr.Zeinul Hukuman and coordinated by novelist and short story writer, V.H.Nishad. I do not think that spending Rs.50/- for an issue once in three months for a journal like this is a waste why because I am sure such journals belong to the category of collectibles as they mark a period in our film discourse and return to the brains from where they have originated. M.Govindan had initiated a series of parallel magazines; though short-lived they all served their intellectual purpose and became the markers of their times rather than the mainstream magazines. Hence, I wish all the best to the first and the forthcoming editions of ‘Filmography.’

Posted by JohnyML at 1:33 PM No comments: