Drawing Lines- Between Romance and Ideology 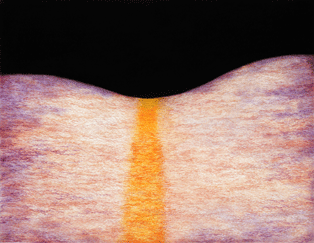 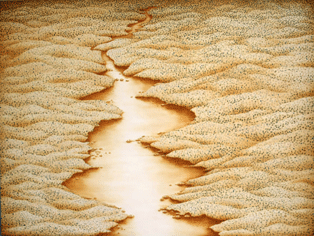 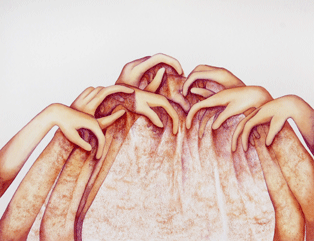 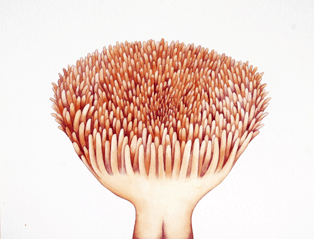 Minal Damani’s solo show at Vadehra Art Gallery, New Delhi is quite impressive. The show is titled ‘Drawing Lines’. Minal has been working on this project for the last one year, meanwhile I visited her studio located at Gotri, Baroda twice and saw how her initial confusions turning into certain convictions about our geo-political situations. This show as a whole shows the artist’s skepticism on the human drawn boundaries in the world map. The lines affirm the political boundaries and they, at present stand as forced anachronisms on the otherwise ‘opened up’ outlook of the human race. These lines once stood for national pride and when the ‘nationalist’ ideas turned aggressive and fundamentalist in nature, these lines became a hindrance to natural human exchange, both in emotional and cultural levels.

Minal is aware of this growing factionalism both in the domestic and international spheres. She, as a Bombay girl witnessed the serial bomb blasts and the resultant fragmentation of the society on religious and political lines and later as a Baroda bride, she witnessed how fundamentalists forces drawing lines between people using fire as their medium. They are charred lines and they smell of burnt human flesh. Like many conscious citizens Minal too is hurt morally, though not physically. But unlike the conscious citizens who often prefer to suppress their moral agitation in sex, serials and shopping, Minal opts to paint her angst in subtle ways, using lines and colors, bringing out the images of world map and the globe as if they were a play of jigsaw puzzle.

I am reminded of a moral story told to me by mother. A saint painted a world map on the one side of the paper and on the other side he painted the face of a man. Then he tore it up into several pieces and asked one of his young disciples to join each piece to make the world map. The boy tried several times and each attempt turned futile. Then with a smile the saint asked the disciple to join the pieces to make the man’s face, which he could do in no time. The saint turned the page and showed how the map is done once the human face is made with ease. The message was: ‘Whatever your culture, creed or race be, if you are good, the world is going to be good.’ Minal’s works are consciously made like jigsaw puzzles of the world map. The artist has deliberately given the suggestions within the paintings how someone has painstakingly arranged the maps back; a romantic vision of an aspiring peace lover.

There is some kind of psychological deliberations in Minal’s act of painting. She makes her images like jigsaws in order to render the viewer (the participant in ideological divisions) into the status of infants. This attribution of infancy to the viewer takes him/her to the primal innocence, where an insatiable quest for knowing, searching and playing exists. These aspirations are not driven by ideological mediations. It is a quest for order and peace; in play one finds joy and freedom. Suddenly a divided world appears to be in ‘order’ before the eyes of the viewers. The implied ‘disorder’ is left open to be manipulated by the game logic of the viewer, which too is unfortunately or fortunately premeditated through collective consciousness about pre-dictated boundaries. But, then that is a fact that we cannot now wish away.

Minal is a romantic as in one of her paintings she asks for a boat. Titled ‘I Need a Boat in My Home’, she paints a romantic landscape, undulating with patches of greenery, divided by a smooth flowing river. The river could be time, the flow of culture, ideas, political interests etc, and two identical pieces of lands are separated by this river. Minal asks for a boat, she wants to cross the river and reach the other land or at least she would like to sail through this river to understand what sceneries both the shores could offer her. I am reminded of a story by Gabriel Garcia Marquez. Titled ‘Light is Like Water’, this story is about two boys who sail through a river of blue light. They live in a place where there is no river. But they want a boat and their parents by a boat for them. One day, in their parents’ absence, they take out a bulb from its holder and a blue river of light flows out from the holder. The boys set their sails in this blue river. They believe in this blue river because their teacher had told them that electricity was like a river, when the switch is thrown on, it ‘flowed’ like water. One day the boys invite the whole class for a boat ride their home. They switch on all the lights and they drown in the flood of the blue river. Here we have a yellow/sepia toned river in Minal’s work. I don’t know if we set sail in this river, ever we would be able to come back to the shores as we have forgotten the truth of shores as we have already taken refuge in the flow of ideologies.

I like Minal’s romanticism especially seen in her drawings. A thousand hands join to become a flower; a flower of fingers. And from the hands that open like an umbrella there comes a rain and in her body contours the setting sun casts its golden touch. These works are touching and exciting, a strange sense of desire and passion to have sensual pleasures are evoked by these drawings. The physical union once I had in an ideal time, which would never come back with the same passion, is evoked with the touch of rain in Minal’s works. I found the works that resemble the shapes of the continents slightly literal and overstated. Perhaps, they could have gone into any other medium than painting. But then I am not the final judge.
Posted by JohnyML at 10:40 AM