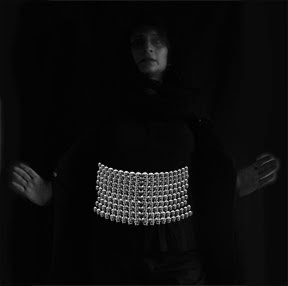 Mumbai based artist, scholar and blogger, Vidya Kamat has been working with the digital imaging of her own self in various roles and garbs in order to debate the creation of socio-political and cultural identities of a woman through an interventionist enquiry into the ritualistic and customary practices of pre-dominant religions. Keeping her own self/body as a field for facilitating various plays of power and ideology, Vidya assumes the roles of the initiated and the enlightened in certain works and at times she assumes the role of a naïve woman/girl who allows herself to be manipulated by the ritualistic acts imposed upon her by others.

Some of the works by Vidya Kamat have invited controversies and the image represented here is one of those works, which has a subtle imagery of a burqa clad woman that had to be edited out from one of her shows thanks to its potential for inviting unwarranted interpretations within the given temporal context of the show. Interestingly, when a woman artist works on the burqa image, perhaps, instinctively she goes for an ornamented representation of the veil rather than the matter of fact representations that a male artist would normally choose. In this case, one may make comparisons between the works of Rathi Devi (posted with the main article) and Vidya Kamat with the ones made by the male artists.
Posted by JohnyML at 6:42 PM

Thank you Johny, for speaking about this work.(specially this is not seen in public) After you pointed out in your blog that there is no much feminist take on burqa , I deliberated a bit before sending you this image.

This image is one of the images of larger suite of works but when seen in isolation , can change its context. The whole series was based on 'accessorizing' death on woman's body. This has been done in various cultures, from Indian Kali to,Aztec mother goddess Coatlicue all wore death symbols on their bodies.

This image is based on the pose of burqa clad suicide bomber wearing a death belt made of skulls. The belt here looks like yet another accessory to suggest the irony of the situation that drives women to wear them.

thanks for that...your words explain the work well...

catch up with you soon

what i find particularly irritating about all the images posted here is that they are perpetuating stereotypes about muslim women.
as a muslim woman and an artist, i am equally horrified at the pretty faces staring blankly into space, lips pouting, head covered alluringly in a chadar made by male artists AND the suicide terrorist again selected hastily or is it deliberately as a muslim woman.
facebook lacks privacy or i would like to counter your space of 'burqa image' by photographs of myself ...it will complicate notions of both, burqa and related stereotypes about muslim women.
You can however look at images of my work which choose abstraction and the use of materials and text to criticize stereotypes and easy conclusions people jump to in the absence of a deeper understanding of what the image can represent.
the original good intention of the artist or a later verbal explanation do not reduce the damage done.
btw i dont want to hurt anyones feelings, i am reacting to the ideas and images assuming ,johnny this to be an interactive friendly space : )