Welcome to the Loot: Museum of Innocence 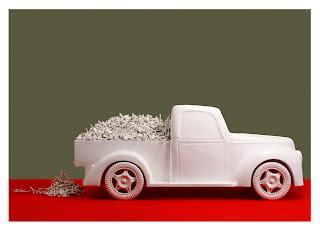 (Welocme to the Loot, Sculptural Installation by Manish Sharma)
Whether it is in art context or not, any collection pre-dictates the possibility of off-loading. To renew anything, certain aspects have to be off loaded. Museums are the places where memorial objects are conserved for eternity, though the modern museums alter and re-interpret the displays by including modern objects of aesthetical ideas and thoughts. Human minds are almost like museums; memories are collected, at times off-loaded, renewed and re-interpreted according to the experiential inputs accumulated in due course of time. Human mind is such a phenomenon that it craves for permanency at the face of flux and chaos at the vicinity of tranquility. This contradiction is often resolved in a zone called nostalgia, which could be termed as a virtual museum of irreplaceable experiences, kept in order and used as a touchstone to verify the validity of something called temporal progress.

Manish Sharma, a Mumbai and Jaipur based artist, in his works, deals with the aspects of museum-ization of memories, off loading of objects/thoughts, nostalgia as a counter-political thought/resistance and the loss of identity at the face of, what we call, progress. Manish Sharma, born and brought up in Bikaner, a border district in Rajasthan, even after several years of his relocation (in Jaipur first and in Mumbai later), makes hundreds of re-visits to his homeland (Bikaner) to see how a city vanishes slowly before his eyes, leaving a permanent scar in his mind. Perhaps, the city exists through various ways of renovations and conservations, but as a person who knows the heart throbs of the city knows that what is being conserved is only the façade, while its innards are gnawed away not only by time but also by the smuggling mafia that excels in providing ‘traditional’ materials for re-building urban houses with a ‘traditional’ touch. 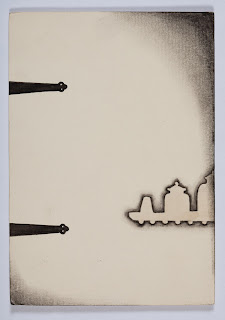 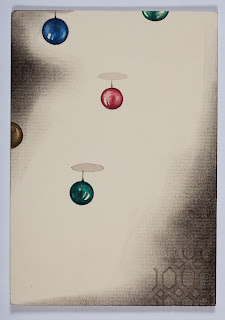 What makes anyone curious while watching the works of Manish is this artist’s passionate engagement with a land, which is known for its tourist-ic attractions, his dis-engagement with those attractions and his conscious contextualizing of the vandalism on the havelis and palaces going on in the backstreets of the city where the artist had spent his formative years. Generally speaking, an artist who has relocated himself to a metro city, in his works would be attempting to make comparisons between his lived/imagined past and the living/real present. Hence, often we see amongst the works of such artists, urban imageries as presences of menacing forces that almost threaten the existence of ‘innocent’ migrants like the artists themselves in question.

Interestingly, Manish does not fall into this usual rut of considering metro cities as menace. He lives in a metro city, works as an expert technical provider for executing Rajasthani miniature style paintings (as he has traditionally and academically trained in Rajasthani miniatures) and never hates the urban milieu. Instead, like a novelist who goes back to his own hometown to find materials for his novels, Manish too goes back to the back alleys of Bikaner. It is not through comparisons with the city life that the images he collects from Bikaner become important but through their very own stark existence, they tell us their stories of their origin, evacuation and the further journeys. 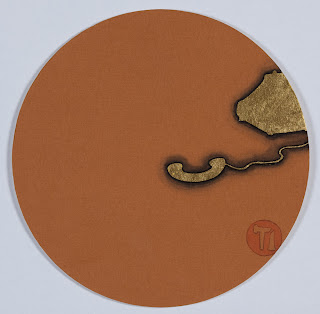 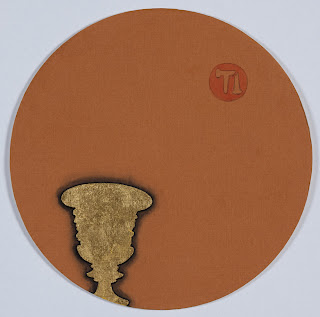 Manish’s early set of small sculptures are called ‘Museum’ (In fact, after seeing these original works at his studio in Mumbai in early 2008, I had almost formulated a project for curating a show called ‘Museum’, which is still under negotiation with one of the top galleries in India). His interest in museum-izing memories/object presences started when he first witnessed how Havelis and Palaces in Bikaner are given to contractors to extract their architectural and cultural components only to be sold in the urban centers. This mass scale extortion of cultural heritage had shocked Manish and he launched himself into capturing the images of such loss. If you notice carefully, these images and lonely symbols kept preciously inside red boxes (reminding the viewer of Jewelries), you would come to know how Manish proudly holds his memories instead falling into a sort of breast beating by highlighting the skeletons left behind by the vandals.

Here, we have an artist, perhaps museumizing himself and his memories, without painting a bizarre picture of the loss, but still capable of evoking the enormity of loss caused by the vandals, amongst the viewers. Subtlety is the base and essence of Manish’s sculptural as well as painterly works. As an artist, Manish understand that off-loading of certain images from the mind is important in order to survive in a big bad world. This off-loading is a political act for Manish. He facilitates this aspect of offloading through the utter negation of the left over. He does not want to include what is left behind in his aesthetic scheme. He virtually offloads the skeletons by highlighting the beauty of the nostalgic past. 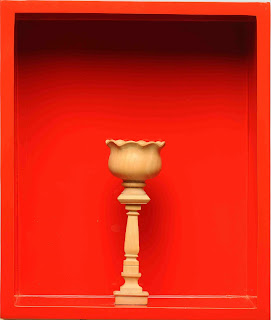 If anyone thinks that it is a retrogressive way of aestheticizing the loss, without mentioning the loss and dwelling deep into the richness of what it had been once, I would suggest that the conscious riddance of the left over, the skeletal remnants of the havelis, palaces and the people around them, is what seen as empty spaces in his drawings, paintings and sculptures. In formal terms of a painting one could say that this artist leaves a lot of empty space in order to highlight the two dimensional aspects of painting or inversely to highlight the illusory three dimensionality of the single images represented. But for me, these empty spaces suggest a political space where the evacuated, the dispossessed and the disowned are still lingering on as shadows, and one should be aesthetically as well as politically enlightened enough to understand this presence of the absent/absence.

Nostalgia as a counter political thought or resistance recurs in Manish’s works. Resistance is a word, which these days comes after the word ‘compromise’ for the resistors are compromised initially before they are allowed to enter into a democratically inclined dialogue. Hence, resistance is not a good word for qualifying Manish’s works however thanks to the lack of an adequate word I should say that the revisits to his nostalgic past like a lonely lover are the ways in which the artist resists the very process of compromise. He does not go there to ‘stage an act of resistance’, instead he goes there regularly to document the place photographically and graphically, and what we see in his works are the images and visions that are often not ‘documented’ by the artist himself or by others. 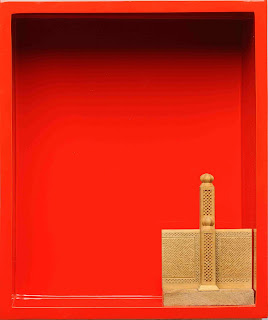 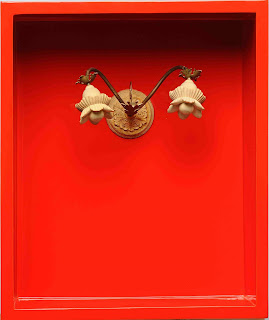 ‘Welcome to the Loot’ is the crescendo of Manish’s creative career so far. In this sculptural installation, he creates a truck in the form of a heritage car (notice the pun, a truck that carries off the extracted artifacts from heritage cites and a heritage car itself) with its boot full of miniature artifacts. The objects from the carrier spill over to the red carpet on which the truck is parked. The truck as well as the objects are created in fiber glass and given a marble finish as marble is one of the materials that defines Rajasthan’s cultural heritage and also marble has an intrinsic value within the global art history as a material used by divine artists. This phantom vehicle is made to stand on a red carpet as in a museum, as in a palatial drawing room or in an imaginary land where it is forced to park. 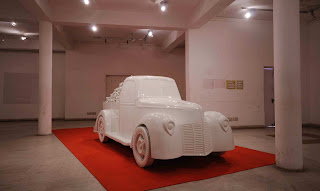 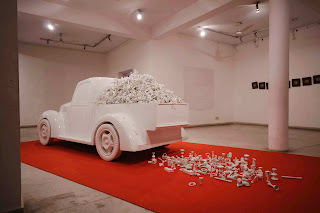 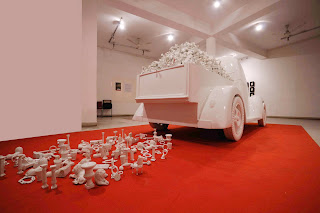 As the title of the work suggests, it is a world of loot and pilfering. And in Manish’s scheme of things, his resistance can happen, as an ordinary citizen with no ‘power’ per se, only by giving them a mock treatment as museum objects or treating them with desirable graveness, which freeze them in time forever with their ugly deeds teething up for the whole world to see. This is the ultimate form of pacifist resistance, the way you give a flower to the soldiers in an armored vehicle, in turn to the cannon balls they have reserved for you.

Hi.
I'm in grade 11 and I'm working on a school project in which I have chosen to contextualise Mr. Manish Sharma's works.
I came across your blog and its been a huge help!
I know that this post was submitted 5 years ago but if you could answer a few of my questions, I'd really really appreciate it.
Thank you so much,
Subah