Archeology of Memories: A Mural Project by Ajayakumar 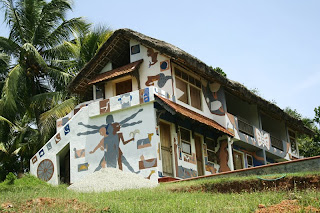 ‘Archeology of Memories’ is a mural done by Ajayakumar. Former Kerala Lalit Kala Akademy Secretary and currently the Principal of Trivandrum Fine Arts College, Ajayakumar has been interested in combining personal mythologies and history in his painterly works. A strongly committed Marxist ideologue and pedagogue, Ajayakumar looks at history as a contestation between different social forces that results into the production of new materialistic and spiritual contexts. Ajayakumar interprets material contexts as the backdrop against which human beings construct their lives and spiritual context as the system of values that the human beings create in and around his products and actions. Hence, in his works one could perceive these contesting forces coming into play, often vivifying their struggle for supremacy and hegemony. And for him, portraying this struggle itself becomes a registration as well as a critique through painterly methods. 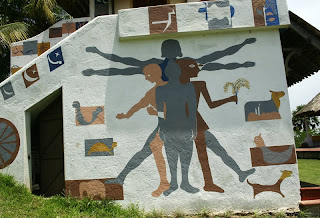 When Ajayakumar was invited by his young architect friend, Syriac to do a mural in his newly created village resort near Poovar, a few kilometers away from the city centre of Trivandrum, Ajayakumar thought of creating a series of images, which could represent and debate the violent interfaces between the local history and the history of colonial incursions in this region. Being a seashore village, Poovar had been close to the trading centers created by the colonial forces. The history of Kerala after the 13th Century AD is intricately connected with arrival of the Western forces along the sea coast of the state. Though it does not hold any visible remnants of erstwhile colonial presence, while watching the sea from the hill top where the resort is located one cannot help but wonder at the history of forced juxtaposition of cultures that has produced both good and bad results. 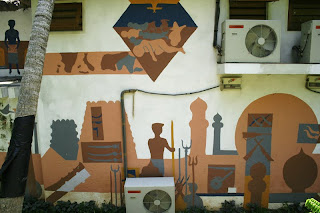 Micro histories constitute the macro history. But ironically, in the larger picture of macro histories, the small incidents get submerged and forgotten. The big picture does not allow the small pictures to emerge and tell the world how these small confrontations made all the difference. However, when an artist with a very inquisitive mind approaches the history with a purpose of analysis, he diligently digs up the micro histories of the location/place and region and highlights it against the larger narratives. When Ajayakumar came to Poovar in 2006 and saw the single unimposing structure that his friend had created as a central module of a future resort, he could connect immediately with the location and the small narratives that constituted the location as in the present. The liminality of the space, which is virgin and unarticulated, attracted Ajayakumar and today his mural, which took almost four months to finish tell us how the artist approached the places which had not been addressed earlier and how he could transform those areas into condensed narratives of materialistic and spiritual struggle of a people against the hegemonic forces. 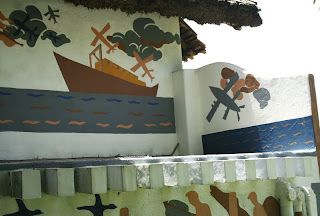 The first image that hits the viewer/visitor/tourist is a combined image of three different civilizations; a combination of the perfect ratio as imagined by Da Vinci in the human form, the Egyptian civilization as represented in the Pharaoh-ic figure and the Asian civilization in the image of a standing Buddha that reminds one of the Bamian Buddhas. This unified figure does not need too much of clinical analysis as it tells the tale of civilizations that had been in confrontation with each other for ages. But here Ajayakumar does not become overtly critical about the hegemonic powers. Instead, he concentrates on the harmony of the three images and it is a way of telling the viewer that the contestations between the civilizations in fact create ‘culture’. But as an artist he is aware of the brutalities involved in this creation/production of culture. And these brutalities are symbolized in a series of seals with hieroglyphic inscriptions around the central figure. As the viewer proceeds towards his left, he could see war images. War often came by sea and then by land. Ajayakumar represents both these locations and also in different tiers he gives the suggestions of modern warfare. By bringing the modern and ancient war scenes in the upper and lower tiers of the building respectively, and also by suggesting the collapse of Iraq through the presence of a historical architecture, Ajayakumar forwards a critique on the imperialist forces that are still on rampage. 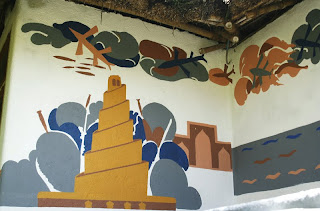 A closer look would reveal that all these wars are happening against religious structures. There is a subtle connotation that all the imperialist wars have got a religious justification as well as a religious backdrop. The inexplicable brutalities of the hegemonic wars are represented by a heap of human bodies in writhing positions. Above this heap one could see the disc thrower from the classical Greek sculptural tradition with a changed body posture aiming at something and he is set against the silhouette of a nuclear missile. Here Ajayakumar becomes clearly critical about the modern western civilization as an incursive force that aims at destroying the varieties of civilizations elsewhere and producing a steamrolled and unified culture. 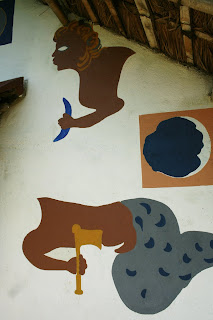 Without making overt judgments on the so called pacifist nature of the Eastern civilizations, Ajayakumar compels the viewer to see an Egyptian scholar of the ancient times standing before two pyramids and revealing his findings to the world. He is positioned as a giver not as an aggressor. The artistic self could be seen in this surrogate image as this portion is clearly marked away from the war scenes. 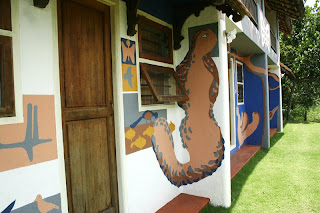 In the upper tier of the front wall, the artist has rendered a narrative from a mythological story. This is the story of a serpent who wanted to swallow the celestial bodies like moon and sun. But in the process he was cut into two by the Gods. Ajayakumar uses this narrative in order to reinterpret it as a refined story of hegemonic aggression. The serpents were the low class people who wished to attain the higher positions through the ‘intake’ of the celestial knowledge as represented in sun and moon. But fearing their future positions, the scheming upper class, the Gods, cut them into pieces. Through the recounting of this story in his own visual format, Ajayakumar brings the class struggle also in the picture but without overtly pronouncing his political lineages. 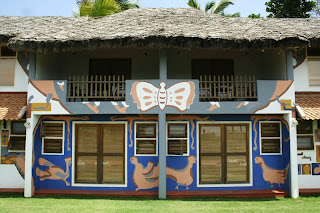 On the other side of the building that faces the sea in a distance, Ajayakumar paints secular stories as if he were talking to a set of students about the beauty of the place. It is a soothing section with the images of mermaids, Apsaras, sea creatures, fishes, turtles, butterflies, peacocks and many small creatures. These images also constitute the archeology of memory, Ajayakumar feels. The nature around you, the creatures that crawl on the earth, the birds that sing, the mermaids that sing to allure, the butterflies that come to flit around your face and every other simple thing in our life are important. And in the final count these micro narratives stand against the macro narratives. And the pain of the people turns into mythologies and once you re-read those mythologies they tell you the stories that had never been written. In this sense, Ajayakumar’s ‘Archaeology of Memories’ is an enquiry into the liminal, the unwritten.
Posted by JohnyML at 7:31 AM