Strange Pilgrims: Journey of Three People into the Land of Secret Touches 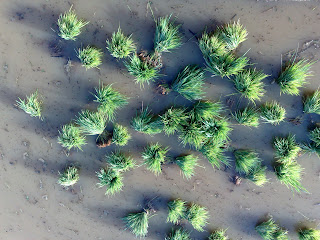 Cross the road, stand on the pavement where strangers stride, extend your palms, ask for alms. Suddenly, you realize life is a blessing and a boon granted by somebody beyond your reach. Strangers look at you with their dispassionate eyes. Some will look through you and some will take pity on you. On your open hands they may throw a few coins. Collect them. One day you may need them to understand your own life.

Life is a pilgrimage and a sort of begging. Slavoj Zizek says that we should not be talking about charity, instead we should be thinking about a world where the very notion of charity does not exist. Zizek is right. But what about those unknown hands and faces that lift you up when you faint into your own shadow, in a strange land on an unbearably hot day? Who were those people who just appeared before you from nowhere with a jug of water, when you were thirsty?

Living on charity is one thing. Regaining your life through charity is another. Often between the giver of charity and the receiver of it there develops a subtle connection based on hurt. The giver feels good because he feels the worth of giving. He becomes a hero before his own eyes and those of others. He becomes eternally connected to the receiver only because he wants to relive those moments of ‘helping’. But the receiver wants to run away from that moment of help. But he is eternally held by the invisible gaze of the giver. So he feels the perennial hurt. 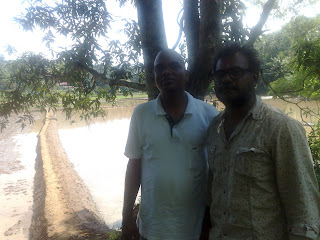 (me and Murali Cheeroth, two out of the three)

But when you are a pilgrim on the road, with an unchartered land before you and some friends to give you a hand and a shade, you are not caught into the quotidian web of charity. However, when you are on the road, something holds you up, takes you on its wings, helps you to climb hills and crawls through caves of rebirth.

There the fields, tilled and prepared for the next sowing lay before you till the greenery frills it up to match up with the colour of the horizon and the crowding clouds. Muddy waters gurgles down to the lower planes, tickling the paddy blades sitting pretty stacked up for the touch of the farmers and their eternal release into the embrace of earth.

We three friends walk through the narrow pathways that divide one field from the other. We wonder at our own beings. Who has brought us here? We have not chartered our path. He said, we will just drive through the slanting sunlight. And the other friend just drove. We stood there in the middle of the field like three strange beggars while the wind dropped its coins of love on our open palms etched with the lines of deeds and misdeeds. Two water snakes flit through stream with a sense of purpose. One of them exchange a covert glance with me. 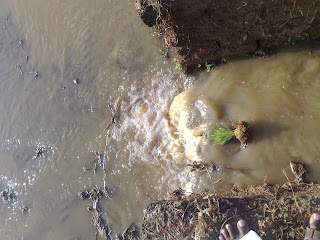 On the way, we see a pond. My friend stops the car. We get down. We sat at the steps that go into the pond. We push our tired and mud caked feet into the water. Between the fingers water flows and the dust of another land mixes with the water that has not gone anywhere. They exchange stories.

Slowly our feet feel the touch of a thousand lips. We look into the water. There hundreds of them; small fishes, the children of water. They eat dead cells, says my friend. If so I am just one big dead cell, eat me, I tell them. 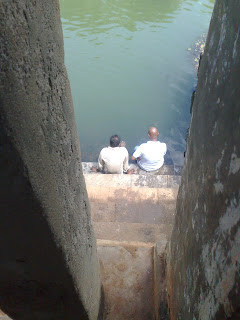 They cover us up. First time I realized how mothers feel when they feed their infants. Hundreds of little fishes eat from our feet. My feet sprout into thousands of breasts. I feel the pleasure of being carried away to the worlds that I have never know before. I don’t even Bernini’s Ecstasy of St.Teresa. But I lean back in pleasure. My thousand kids feed on my feet. 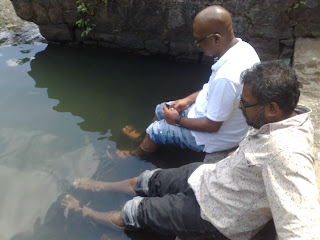 We, the strange pilgrims say good bye to each other after climbing several hills and walking across several fields. At one point we hug each other and cry. 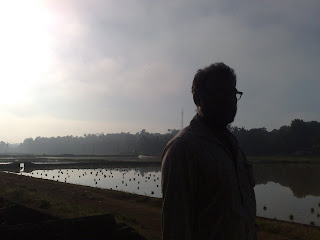 Pilgrims are strange people. They hug each other and cry.


(All the pictures are taken by Prasad in his Mobile phone camera)
Posted by JohnyML at 9:30 AM

sensual feet feeding :) bless you on your pilgrimage:)