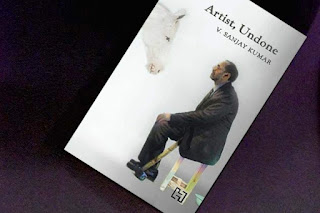 Harsh Sinha, fat, forty and fucked decides to take a one year sabbatical from his advertising career and wants to throw a surprise to his wife who is living with their daughter in Chennai. While toying with this idea, he happens to see a painting by Natraj Sharma titled ‘Fat, Fucked and Forty’ and Harsh gets hooked. He buys it for a whopping sum of Rs.27 lakhs. Since then he is a changed man. He has been away from his wife Gayathri and daughter Poornima for almost eight years. To be precise, throughout his married life Harsh has been a weekend father and husband. He goes to Chennai by the weekends and comes back to Mumbai for the weekdays. Now he wants to announce to his wife that he is going to be with her for a year. Also he wants to surprise her with his new catch; the Fat, Fucked and Forty painting. But something else was waiting for him in Chennai. Gayathri turns him away without giving much of an explanation. So now Harsh is jobless and homeless. Suddenly found anchorless in life, he wants to sell off his painting.

That is how Harsh Sinha’s tryst with art starts and that’s how the novel ‘Artist, Undone’ written by V.Sanjay Kumar starts. Published by Hachette India and priced at Rs.495, this book had raised a great interest amongst the art lovers and like many others me too before reading the book had thought that it was a ‘fact finding’ book about Indian contemporary art. But when it was published (read, promoted) during the India Art Fair 2012, the book gave a pleasant surprise to the readers for it turned out to be a book of fiction pitching mainly on the ‘events’ of Indian contemporary art scene. Before delving deep into the literary flourish of the book, let me tell you that it is the first work of literature that directly deals with the nuances of Indian contemporary art scene.

Author, V.Sanjay Kumar is an insider of the art scene and he is associated with Geetha Mehra of the Sakshi Gallery, Mumbai and Taipei. He gets into the skin of the protagonist, Harsh Sinha in a peculiar way that the reader is left to wonder whether he is narrating his own story. But through the skillful weaving of fact and fiction, Sanjay Kumar deflects the preconceptions that the readers tend to develop as the act of reading progresses. Harsh Sinha finds that his neighbor, the controversial artist Newton Coomaraswamy at the Coromondal Artists’ Village in Chennai, an acclaimed anarchist, plagiarist of Francis Newton Souza and a much envied womanizer making advances to his wife, Gayathri. 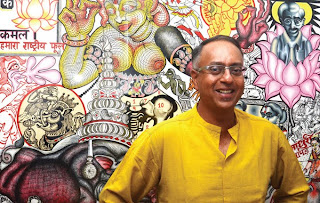 Harsh visits many galleries with his friend Roongta in order to find whether he would be able to sell his paintings. Slowly, Roongta, the resident Baniya too develops an affinity for art. In the due course Harsh meets Manoj Tyaagi, a financial consultant who now struggles to redeem his name from a grave financial scam that the government believes to have created by him. He is an avid collector of Newton’s works. And he says that he collects everything of Newton because like him Newton too is fighting to redeem his name. Harsh is introduced to Bhairavi, a Mumbai gallerist who is so passionate about her profession. Bhairavi is in the process of having a solo show of Newton Coomaraswamy. The opening press conference turns out to be controversial and Tyaagi buys the whole show.

In the subplots we see a couple of American art students trying to know more about Newton who in his first New York solo hosted by Bhairavi surprises everyone with his landscape paintings, a scandalous departure from his much talked about and maligned Souza like works. Also we see Gopi, a fellow painter in the Coromandal Artists’ Village and Marthandam, a retailer of mobile handsets keeping a track on Newton’s life and activities. They are hurt because Newton could cajole Gayathri into his life. There is love, passion, incest and false morality in their concerns. Years after, Tyaagi’s son becomes a gallerist and works towards buying the studio of Newton and becomes successful in it. Newton Coomarswamy passes away silently in one night. Harsh gets a call from his wife Gayathri. He is all in anticipation to see his wife now in graying hairs. But before she opens the door, Harsh decides to walk back. And Sanjay Kumar never says, to where. 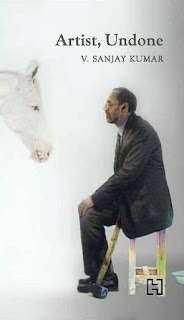 The narrative moves between Chennai, Mumbai, Delhi, New York and many other mental spaces. What makes the reading exciting is the surreal intercuts between present-past and past-present. As we read on we feel that we know the places, the people and the galleries and cafes where Harsh and his friends walk into. Sanjay Kumar works through the familiar and makes them strange. Perhaps, this is the technique of the contemporary art itself; it takes the mundane and transforms it into the unfamiliar. In this transformation, the real people become characters and Sanjay Kumar makes it a point not to stereotype them. We cannot but smile when we go through the narrative about how the young gallery assistant behaves when they are confronted with novice art collectors and art lovers.

The book is amply illustrated; not in the Bergeian way but in the Pamuk-ian way. The paintings reproduced here in the book are the real markers/paintings that connect to the real people who have painted them. But the narrative like a Tony Ousler video juxtaposes one character with the other. One interesting thing about this book is the inbuilt discussion on plagiarism, influence, adoption, inspiration, co-optation- all phrases involved in the discourse of contemporary art and the idea of originality. Newton Coomaraswamy accepts that he incorporates Souza in him but he demands that one should see what he has done to the Souza in him. Without entering into the theoretical blabbering, Sanjay Kumar raises this issue of originality through his protagonists. So is his scathing criticism on the state of art critical writings. Sanjay Kumar in his characteristic narrative style, quotes critics like Geeta Kapur and Ranjit Hoskote and debates whether lucid writing is still a dream in the Indian art criticism.

great review..!
i enjoyed the book thoroughly... makes an insider smile at all the antics and nuances.