Apna Ghar- A Brand New Show at Vadehra- I Recommend 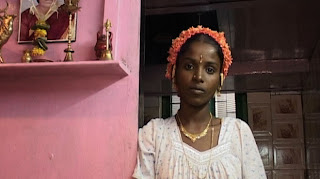 (from Nishitha Jain's Laxmi and Me)

Sharp 6.00 pm I walk into Vadehra Gallery, D-53, Defence Colony, New Delhi, where ‘Apna Ghar’ (Our Home), a group show of four young artists namely Vicky Roy, Chandan Gomes, Samudra Kajal Saikia and Nishitha Jain is about to start. Rubbing shoulders with the imaginary glitterati of the cultural world of Delhi are the boys from Salam Balak Trust, an organization that runs shelter homes for the run-away kids; the social marginality of the obscure world of Delhi. A few of have cameras in their hands and are happy to click away the images of the people like me who share the liminal space in the cultural world of the city with them. A few enthusiastically identify themselves in the images exhibited there on the immaculate walls of the gallery. Texts narrating the lives of the young boys are vinyl cut and pasted here and there adding design quality to the show; perhaps that is how obscure lives embroider the rich tapestry of urban life in general.

They celebrate the success of one of them; Vicky Roy and erstwhile run-away child from Bengal who had chugged into Delhi’s filthiness and callousness years back in order to explore the world. His father was despotic and he was seeking liberation. Curiosity took him to Delhi and destiny overpowered the enthusiasm of that seven year old forcing him to become a dish washer than an explorer of the world. Vicky Roy was rescued by Salam Balak Trust and the lore puts it, he was introduced to camera, got hooked because he thought camera would him a distinct personality. It did give him. He got trained under experts and mentors like Anay Mann and Pradeep Dasgupta and late Prabuddha Dasgupta. A residency program took him to New York and he got a chance to work at the Ground Zero. Vicky came back and ever since he has been under limelight.

Vicky Roy, in a series titled, ‘Apna Ghar’ raises the issues of identity, governance and life in institutions. Louis Althusser speaks of Ideological State Apparatuses that are meant for making good citizens out of savage ones. The run-away kids are primarily treated as savage beings that are to be corrected through proper indoctrination of the ideologies of the state in and by an agency that confirms to the state in all possible ways. Vicky does not raise a staunch critique against the glorified penitentiaries like rescue homes nor does he challenge the idea of state. Instead he documents with a sense of empathy without losing the feeling that he had been once a member, even when he is now having the authority of camera and the fame facilitated by it. The critique however is subtle and intrinsic to the visual texts. For example the constant attention that he pays to the boys doing various forms of drills, studies and games inversely gives the idea of ‘correctional’ practices. It is not punish but a sort of soft disciplining. The rebellion comes out of his young mind when he trains his lens at the images like a sleeping boy abandoning his body to the complete gaze of the state temporarily represented by Vicky’s camera’s gaze or the glossy postures of semi-clad Bollywood heroines and the washed under garments drying on the cots.

The idea of home, when it is representational and replication of state ideologies, becomes a sort of correctional ideology governed by the notions of good citizenship and aspirations to gain membership into a society comprised of successful and desirous people. Good living and controlling of savagery, disciplining through familial punish are the ways in which a good citizen is produced within homes. Chandan Gomes addresses this issue in a series of digital prints of his home interiors titled ‘There are Things I Call Home’. Gomes’ enunciation of objects within the home through visual registration creates and interface of identities; the formation of his identity as a domestic(ated) child and the identity of the one who comes back to the same home after receiving daily education from one of the ‘elite’ colleges in Delhi. The interface of these two identities becomes problematic in Gomes’ works because the reality of home that he experiences is quite peculiar.

(There are things I call Home- by Chandan Gomes)

Hailing from one of the old parts of Delhi, Gomes’ family has been living in that particular one room house for many decades. The one room set has seen birth of Gomes and his siblings, besides the generation that brought his parents to that small little abode of heavy human traffic. As the four walls and the given space do not expand themselves to accommodate a growing family, the objects find their own spaces right from the floor to the ceiling. The expanding world of objects somehow has been fitting in like a jigsaw mutating into ever accommodating amoebic forms, and been forming Gomes’ identity as a citizen which has been in direct conflict with the limitless expanses of rich life that he kept witnessing in the elite college from he got graduated. Here Gomes does not document this conflict. On the contrary, he traces the routes from where the perceived and experienced conflicts are generated as he keeps the realm of the rich and spacious world out of his camera’s ken.

(There are things I call home by Chandan Gomes)

Problematizing home becomes a point of departure for Samudra Kajal Saikia, a Delhi based young performance artist who originally belongs to Assam. The constant debating of having a home and having no home manifests in the quasi-spiritual and quasi-practical world that Saikia wants to capture in the performances, textual renditions, illustrations and public art projects. He creates his pet ‘Khankhowa’ (Ear Eater) project where brings forth a procession of houses on wheels. They float around the roads in Assam bring the private and public space into one point of discourse. He traces the history of migration within the tea-plantations in Assam vis-a-vis the history of the sons of the soil. He connects the history of migration in a given locality (accentuated by the experiential history of his own self within the same context) with his own migratory status in a city like Delhi. Saikia does his projects in collaboration with like-minded artists and well wishers and together they create the idea of ‘street’ and ‘carnival’ where polyphony is possible. His quasi-spiritual inclination is palpable in the poetic renditions complete with water colour illustrations which show their affinity to the sufi poets like Kabir and Lalon. Kabir once said, burn your homes and come to the street; Saikia seems to be clearly inspired by this.

If homes are battle zones portrayed in the beautiful colours of docility, domesticity and love as they were taken directly out of an advertisement, Nishitha Jain brings two different homes and their experiences on to a single platform; a documentary titled, ‘Laxmi and Me’. This 59 minutes long documentary traces the life of a maid servant in Mumbai. Nishitha had met Laxmi when the latter was thirteen years old. Being a woman with liberal ideas Nishitha had treated her like a sister and had made some footage of her life and work, who hardly worked for an hour everyday at her home. By the time she reached Laxmi had fallen in love, become pregnant and afflicted by tuberculosis. Nishitha, affected by the sight of the frail body of Laxmi, decided to follow her life, while helping her through her pregnancy and delivery. Nishitha, however consciously keeps the two ‘homes’ (socially demarcated realms of their woman-lives) separate and never shows a charity attitude. The idea of beautiful and peaceful home is poignantly subverted here in this documentary. 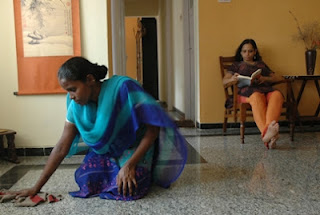 (from Laxmi and Me by Nishitha Jain)

Verdict: The show and the party must be still on when I post it. The urgency of me writing this proves that ‘Apna Ghar’ is a meaningful exhibition. Vicky Roy should now move beyond his Salam Balak  days and conceptually expand the idea of home and the world through different imageries. Gomes looks solid with his images but I am more anxious about his next set of works. Some artists have the tendency to become captive of their own making. Hope Gomes will not get into that trap. Saikia could move in any direction. Provided he gets adequate support from funding agencies his illustrated books could be strong socio-cultural and political critique. But India has a problem of celebrating second and third rate graphic novels as world class stuff. Saikia needs more attention from agencies. Nishitha Jain touches your inner self with her documentary, Laxmi and Me. But then, each person in Mumbai is a story and an interface of contesting ideologies. I appreciate Jain’s documentary.