Today I Decide to call Myself a Non-Malayali

I wonder whether I am any more a Malayali. I had all this pride to be a Malayali though I did not marry a Malayali woman. My formative years were spent in Kerala and my thinking process is more or less shaped by the typical Kerala milieu. My black humor, cynicism and the perennial irreverence for the normative come from the tradition of Kunchan Nambiar, Sanjayan, E.V.Krishna Pillai, Kunjunni, O.V.Vijayan and V.K.N. To criticize without fear was a lesson learnt from the columns written by critics and theoreticians like M.Govindan, M.N.Vijayan, Sukumar Azhikode and M.Krishnan Nair. My defiance for political understanding was shaped by reading E.M.S, P.Govinda Pillai, B.Rajeevan, Sakharia, K.Venu and Ajitha. My poetics is shaped out of reading Ezhuthacchan, Kunchan Nambiar, Cherussery, Kumaran Asan, Ulloor, Vallathol, Ayyappa Panicker, Satchidanandan, Balachandran  Chullikkadu, Kureeppuzha Sreekumar and the young ones like Anvar Ali and Pavithra Theekkuni. My feminism comes from Lalithambika Antharjanam, Madhavikkutty, Sugathakumari and J.Devika. My cinematic understanding comes from I.V.Sasi, Adoor Gopalakrishnan, Aravindan, John Abraham, Priyadarshan and so on. I love all the mimicry artists in Kerala because they are the people who carry forward the tradition of Kunchan Nambiar. And my artistic understanding comes from Namboothiri, Kanai, Shibu Natesan to all those friends who used to spend endless hours discussing art at the Trivandrum fine arts college and public library.

That does not mean that I had closed my windows to the world. Born and brought up in an egalitarian society I was well informed of all what had been going on all over the world. I literally grew up under the pictures of Gandhiji, Kennedy, Marx and Lenin. I was guided by a pair of sharp eyes of my father who read more Russian literature than Indian literature. My parents were daring enough to give me a name ‘Johny’ even when we had a small temple right in the middle of our courtyard where my grandmother worshipped Shiva, Ganesha, Lord Ayyappa and Krishna. I grew up with Muslim friends who attended all the temple festivals. I feasted with them in most of their religious occasions. Hindu boys worked as volunteers in Muslim sisters’ marriages and vice versa. Party politics did not deter anybody from having strong social bonding. When it was dark, those college girls alighted at the local railway station were accompanied to their doorsteps by young men who did not every try to molest them. I was a proud Malayali. 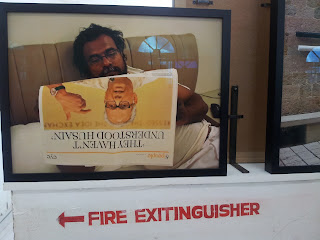 I have been living away from Kerala for the last two decades. Not even a single day passed in my life without singing a Malayalam song or reciting a Malayalam poem in my mind all these days. For years on I used to be very nostalgic; a kind of feeling that was not finding enough avenues to express. Delhi has always had a strong Malayali population. At times I made friends with a few of them and most of the time I kept myself aloof. But I was not away from the Malayali ethos that defined me. I imbibed North Indian ways of living and negotiated with my body and mind to be an Indian rather than a Malayali. But my practice has always been egalitarian though the critical Malayali’s essence working throughout as a guiding spirit. People used to criticize me for not transforming myself into a complete North Indian with an accented Malayalam and more English. I am a very proud person with a strong command over Malayalam as well as English as useful languages. This had even given me opportunity to translate international literature into Malayalam by the major publishing house, D.C.Books.

But today I am ashamed of calling myself a Malayali. I am ashamed because the government in my state Kerala has lost all its sense of direction, democracy and justice. It was just a month back that a special enquiry committee deputed by the Finance Department of the Government of Kerala, after its meticulous investigations found that there had been discrepancies in allocation and expenditure of the five crore rupees funding to the Kochi Muziris Biennale trust. The committee also suggested that the organization should be black listed and a vigilance enquiry should be ordered. Following this the cabinet took a decision to order a vigilance enquiry on the Kochi Muziris Biennale Trust. If found guilty, it was even proposed that the organizers should pay the money back to the government coffers. 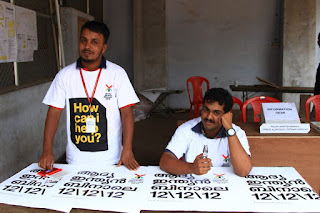 (May I help you- Young volunteers at KMB- Can you really help?)

On 12th December 2012 the Kochi Muziris Biennale was inaugurated. Ironically the Chief Minister and the cultural minister who had declared a vigilance enquiry on the organizers attended the inaugural function. In no other state you would find the state heads attending a function which is under scam and suspicion. Ever since the KMB Trust was complaining that they did not have enough money to finish the works and the Biennale was attracting a lot of visitors and it was a grand opportunity for the financial development of Kerala. Film star John Abraham visited the Biennale and offered Rs.10,00,000/- Media celebrated it. Auto major BMW also is reportedly pumped in some money to the Biennale Trust. Several other dignitaries visited the Biennale and some of them demanded that the government should support the organizers. Super Star Mammootty also visited the Biennale but he raised the issue of accountability and transparency. But nobody highlighted his comments. Today, both the ruling and opposition MLAs from Kochi region ask for further financial assistance to the Trust, which in fact the government had categorically denied when the enquiry report became public.

You may ask why I am opposing or people like me opposing further financial assistance to the KMB Trust. Yes, we have been opposing the lack of transparency and funding modes pertaining to the KMB. None of us ever said that we would stop Biennale. Anything wonderful happening for any reason in any aspect of social life is welcomed by us though it has been misinterpreted by many. I am disappointed because a government that has found anomalies in an organization is now planning to give more financial support to the KMB Trust. That is against all democratic values and it denies justice to people who demand transparency in funding matters. 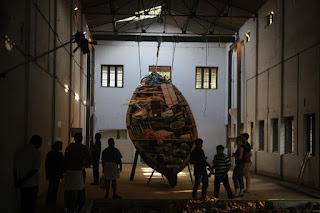 One can understand why the MLAs and the business communities in Kerala want the KMB Trust to be supported. They want their business ventures to flourish if biennale brings more business opportunities in terms of tourism. And it does happen. There is no denial to it. But let’s approach the issue from a different angle. The initial support or Rupees five crore was given to start the biennale activities. The agreement was that the rest of the money would be raised by the Trust from the private sector. But the Trust failed miserably in getting private sponsorship. So they, in the name of art and culture demand more money from the government. Even after the vigilance enquiry hanging on their heads if they are asking for more funding from the government and the government contemplating on releasing more funds, then we should understand that there is something deeper cooking or something decaying terribly. What is decaying is nothing but democracy and justice. The government and business lobbies could flout the democratic demands of the opposing people and silence the voices of opposition. This is brutal. The egalitarian Kerala has succumbed to the rule of money and power.

I don’t want to belong to that society and claim that we, Malayalis are very politically informed people and we do not allow any kind of injustice in our state. Kerala has ultimately proved that art and culture could be another avenue of business expansion than critical thinking. I am not against Biennale. I will go to see it but not as a Malayali but as a dispassionate art lover. I hang my head in shame on behalf of all those friends who still give it a fight.