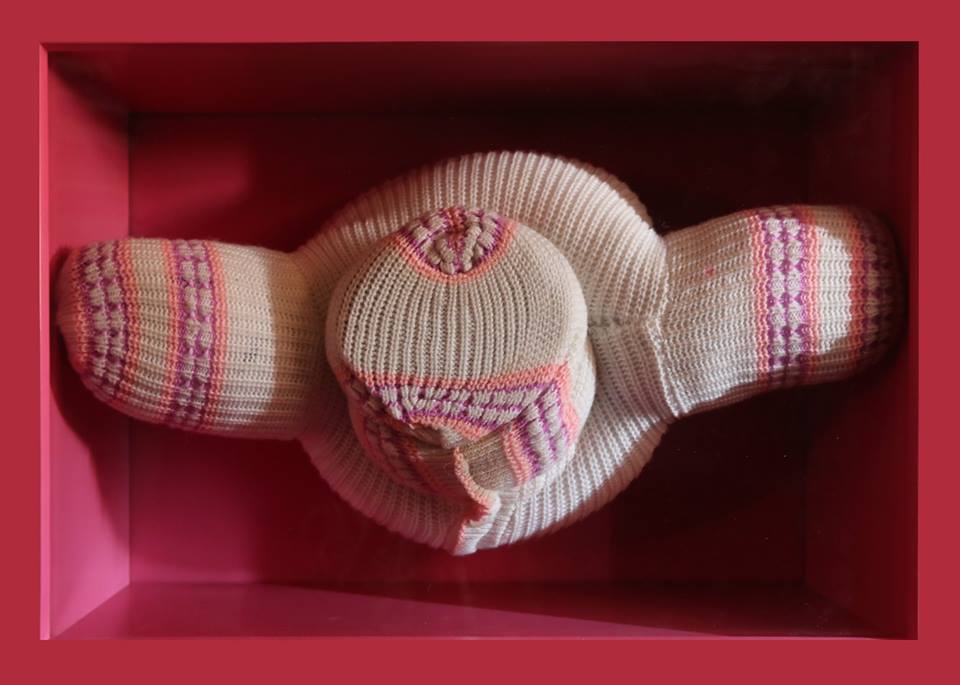 (A New work by Chintan Upadhyay to be shown at Gallery Espace in April 2014. for illustration purpose only)


After a long time I hear the chirping of birds. Silent greenery looks at me curiously from the glass window. Brick and mortar clutter the space beyond the tree. The kaleidoscopic view of nature here refracts only the residual urbanity. Fringes grow faster than the planned centres. Constant evacuation of the peripheries expands the possibility of the centre to puff up further. There is controlled arrogance in the air, which is split by the wailing of a vegetable vendor. This sight and sound of the world is same everywhere. It all depends on who sees and hears them in what and which state of mind. My friend has moved from spectacular works of art to stuffed woollen toys in constricted shells. He has a large house, large places to party, large cities to travel and a large number of friends to share his ideas with. But he has moved from large works to small ones; that too placed in suffocating cages. I can understand him. He is responding to his state of mind. Art of whatever kind from, however the artist tries, comes from the mind of the artist; if it is cluttered his art would reflect that clutter. It is all about the space inside mind, or rather mind itself is the space.

How do you define space? I am not a scientist so I am not even attempting to give a scientific definition to space. Space is everywhere or everywhere, the idea of everywhere itself is space. In space, we see physical things with shapes and space gets defined according to the contours of the physicality of the objects. A wasteland, which has been a vast expanse of filth, would turn into a beautiful architectural complex when it comes up there. The space was there but it was an expanse of dirt and in the cultural and visual thinking of ours a vast expanse of space whether it is of absolute nothingness or of filth is just a space of immensity and we do not like the spaces of immensity because it defies definitions. We need objects to fill in the space with. For space, physical objects are like what a name to a person. Name makes the person a definitive subject; a countable and recognizable entity. He could be tackled easily. He could be tamed and brought within the system. A nameless person is a meaningless wasteland. He invokes fear, anxiety and terror. That’s why we fill in the places with objects. A room corner is not a corner if there is not flower pot. A room is not a room if there is no book shelf. A kitchen is not a kitchen if there is not an array of pet bottles filled with innumerable items which perhaps one would never use or rarely use. These things give definition to the space that we dwell. A corner without a triangular table and a flowerpot is not a corner. It is a disturbance; children fear corners so are the grown up. Children fear blank spaces so they fill in them with lines and doodles. Grown up fill in them with things.

Space, for me is knowledge; it is not a thing. Knowledge is not information. Knowledge is not a library or Wikipedia. Knowledge is the limitlessness of existence and abundance of life. It happens within what we call our ‘inside’. But there is no inside and outside. This duality is created by fake spiritualists. Human body is mind and human mind is body. And it is space. Space is truth; perhaps the only truth. And if space is truth it happens both inside and outside alike. If space is knowledge, then it happens both inside and outside alike. Knowledge is consciousness. The awareness about consciousness is knowledge and knowledge about consciousness is awareness, both give the freedom to experience space. In space there exists one’s ability to live and grow. When there is no space there is no knowledge; it just becomes a kaleidoscopic refraction of spangles. When there is no knowledge there is no space too. Space is for knowledge and knowledge for space and the thirst for both gives freedom to a human being. Space is self created. A person who fills in oneself with things and all what is not needed has the tendencies of anal retention; one who does not want to shit. He accumulates all what is not needed. He is afraid of being light. Space is lightness. Knowledge is lightness and everything happens both in human mind and body, which are not two entities but one and the same.

Only when a person experiences such freedom of knowledge experiences space and in that space beauty comes filling in. When beauty joins hands with truth the real works of art happens. If art is happening in a constricted way it is the reluctance of the artist to let the things go. He chokes himself with the responses to what has happened to him so far. But I do not say that it is not good. It is good as far as it is cathartic and self purgative. Such art which is limited of space is a sort of confession, a sort of self flagellation and a sort of repentance. This art will pass and space will come back. But let me warn you; space is not about bigness. Space is not about smallness. Space is about freedom. In the most crowded place one could feel this freedom. This freedom comes from his perennial understanding to accept the given and improve from there. The improvement does not have external parameters. It does not have internal parameters either. It fills in the space, that is you, automatically and flows out. It is like love. It cannot be measured in ounces or litres. Love has only metaphors as measurement. So is space, so is freedom. Expressions are metaphors. Life is an expression of an organism. Human beings express their space, therefore their freedom or slavery. De-cluttering of anything does not make space. Filling up or vacating do not make space. Space happens when one decides to be space itself. Freedom starts where everything else ends and your existence begins.

Now you may ask then what about other practicalities like a leaking faucet, an empty gas cylinder, an un-ironed shirt and so many other things? One could be a good driver but he need not necessarily be a mechanic. But a good driver should have the basic knowledge of the engine as well as the places where he could get the problem solved. So practical problems could be solved, if not all by oneself, but with the help of the experts. But brooding over a leaking pipe will not solve any problem. It will clutter space and it will limit freedom and as a result of it, it will finish your existence. I am not preaching. I am trying to talk to myself on a Sunday morning. I could see the silent greenery peeping at me from the glass window. And beyond it the nature has become a jigsaw of brick and mortar.
Posted by JohnyML at 8:14 AM