Dogs in Art: Dog Depictions in our Society and Art 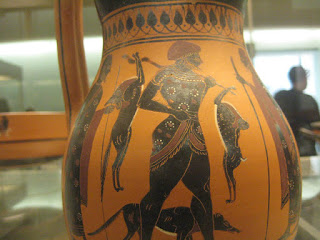 
Dogs are the best friends of human beings. How ordinary that sentence sounds! It is also said that dogs and spouse slowly start resembling their owner. How atrocious that statement sounds! The word owner could be used in the context of a dog but what about a spouse? Ask yourself. There is a constant need to own each other and disown too. These days, dogs have become a subject of social debates. They seem to believe in a Semitic god who had told the human beings to go and multiply. In this case too dogs and human beings are alike; they obey the God to the dot. In Hindu mythology too references of dog come often. Lower caste characters are accompanied by dogs; remember Shiva appearing as Chandala (Dalit) with a pack of dogs. It was a dog who accompanied Yudhishtira to heaven for he too had done the good deeds. Also, there is a mean reference in Mahabharata where a dog ogled the love making between Dharmaputra and Draupadi. He was cursed by the elder Pandava and that’s why dogs are seen coupled in open, shamed and stoned by public. Voyeurs were given suitable punishment in myths. When Indra ogled at a sage’s wife, he grew vaginas all over his body and he had to go in hiding. Krishna was the only voyeur who was permitted to letch at women openly. But he did not have a dog to accompany him. As I cowherd Krishna must also have had a dog to follow him, I believe though references of dogs are purged from the textual and visual narratives. 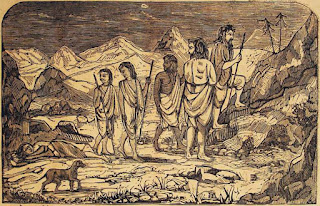 In art dogs come quite often. If dogs are seen in the traditional art both in the Western and the Eastern streams of it, then we can deduce that they were a constant presence in human life. Earliest references say that these wild animals from the steppe regions (with tall growing grass) started following human beings and were soon domesticated by the primitive people for various purposes including protecting their children and pack. Recent studies in man-dog relationship have come out with the finding that it was through the eye contacts that the human beings and dogs developed a trust based relationship. Human beings used to look at the dogs straight into their eyes and it released a hormone called oxytocin in their brains. This is the love hormone that developed mutual affection and trust between dogs and human beings. This love for dogs has been always shown in art right from the cave art period. It Greek vases and tombs one could see dog depictions. Since Renaissance, we see recurring depictions of dog not only in religious contexts but also in secular contexts. In Peter Brueghel’s works we see dogs replicating the sins of human beings in their various postures of fighting between each other. 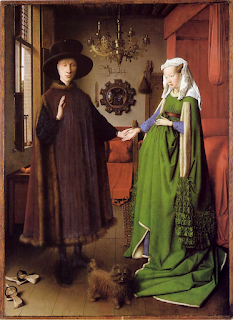 Social as well as cultural sophistication brought dogs from the courtyard to the inner rooms. Predominantly used for hunting, the dogs and their difference species slowly became pets and got entry into the inner chambers of both men and women. Art also started reflecting this transition as devoted portraits of famous dogs and pets were commissioned by the royal and aristocratic patrons. Today we see innumerable photographs and videos of pet dogs even framed and kept on the show walls. Amongst the depictions of dog/s ‘the Wedding of Arnolfini’, by Jan Van Eyck in 15th century appears to be very important. Famous for his symbolism Eyck here brings a poodle at the feet of the married Arnolfini couple and it is read into as a symbol of female softness, servility and loyalty to the wedded home and husband. In the oriental art too, we see several scroll and parchment paintings and ink drawings where dogs are seen walking along with monks and mendicants. 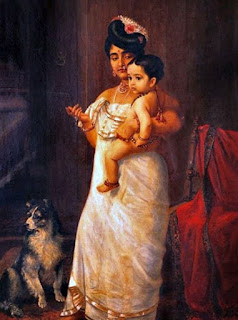 In Modern Indian art, we see the dog for the first time in a painting by Raja Ravi Varma. Titled ‘Here comes Papa’, a Nair lady is seen holding her son at her hip and showing outside the frame perhaps where his father is seen coming. Though there is a contention about the title and the thematic, what makes this painting interesting is the presence of a dog in the frame. The painting not only shows the arrival of the patriarchy into a society where matriarchy was in vogue but also the arrival of modernity in terms social and domestic life which is connoted by the presence of a dog. Dog depictions are however not seen too strongly for a few decades till Ram Kinkar Baij made his famous sculptures, Santhal Family and Mill Call. In both these works you could see the dogs becoming an integral part of the family’s existence. Baij shows the transition of economics in these works; there is a movement from the agricultural economy to the industrial one. Dogs move with economics as the people move with it. Baij, till he died in 1980 took a special interest in animals and birds in general and dogs in particular. In 1940s during the Bengal Famine, when Somnath Hore, Chittaprasad and Zainul Abdeen went to document the famine scenes they could not avoid the presence of the struggling dogs. 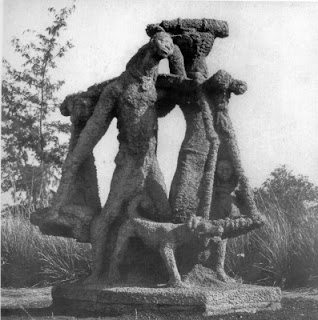 Though it cannot be called a Shantiniketan tradition, the best dog depictions have come out of Shantinikatan. K.G.Subramanyan is the master of drawing dogs and monkeys. A.Ramachandran also has painted dogs in their ferocious and romantic forms from his 1970s dark paintings to the 1990s romantic paintings. K.S.Radhakrishnan’s Chandela Rider is one sculpture that has captured the essence of a dog’s movement which could be likened to the movement of Giocometti’s famous sculpture of a lean dog. Giacomo Balla’s ‘Dog on the Leash’ cannot be forgotten at this moment. However, the most iconic dog depiction in India is done by K.C.S.Panicker in one of his last paintings titled ‘Dog’. A dog cannot be so strong, hungry, ferocious, and at the same time represent Time as he is seen in the painting of K.C.S.Panicker. Perhaps, Malayali artists have a very special affinity for dogs. In the works of T.V.Santhosh, K.P.Reji, Ratheesh, Rajeesh, Shibu Natesan, Bhagyanathan and so on dogs appear as a recurring theme. 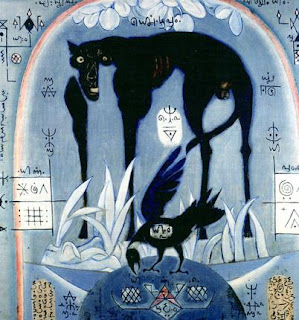 There is an ongoing debate today regarding stray dogs: whether to kill them or not. Some say they should be killed. Some say they should be protected. Middleclass views on this issue are quite varied. Some of them believe that the dog saviours do it for supporting the pharmaceutical industry that produces rabbis vaccine. The protectors allege that the killers are ruthless. Maneka Gandhi, the central minister for animal welfare and herself and animal rights activist recently made a ridiculous comment saying that when a dog comes to bite one should climb on a tree. She was trolled to zero in the social media by people. We need to think more about dogs and their relationship with the society. Killing them is not a solution and letting them loose is not a solution either. Our social and environmental engineers should think about it and find a good solution. 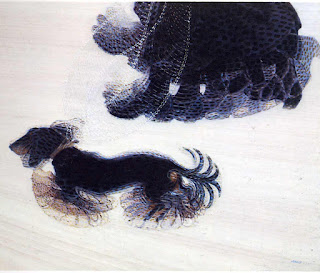 In the meanwhile, I see a very peculiar attitude of the dog owners on a daily basis. I go for my morning walk in a very large park. People come with their dogs to stroll them. There are also a lot of stray dogs there and they are settled along the jogging path. Some of them are very playful and jovial. They go behind the well bred and well kept domestic pets and play with them. Some lenient owners allow them to have even sprint matches. While the dogs are happy with each other, I see some of the owners shooing the stray dogs away exactly they would shoo away the street kids from their own Amul babies. Yesterday I heard a man asking a stray dog in the park as it was growling at his pet dog: ‘who are you son of b***c? How dare you bark at my baby?’ You may translate it into Hindi in many different ways and spice it up with the choicest Hindi expletives. I heard it not once. Several times from several people. Then I tell myself. Man, it is not just about human beings. Dogs are also brought up in a caste system in India. But I do not know whether the dogs really care about it or not.
Posted by JohnyML at 11:12 AM