Rohith Vemula’s Suicide: No Longer He a Game Changer in the Dalit Struggle 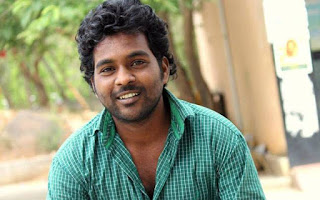 
We need a death to value life. We need a suicide to demand equal rights and justice. Today, the others’ death is an occasion for the living to show outrage. Somewhere I read, amidst the growing angst against the authorities of the Hyderabad Central University and one of the central ministers all over the country, seeking justice for the Dalit research student, Rohith Vemula who committed suicide as a protest against discrimination, some artist presenting a work of art about ‘death and the effects of it that leaves on the living’. I could not help thinking about the famous title of Damien Hirst, ‘the Physical Impossibility of Death in the Mind of Someone Living’. The more we think about it the more we get into the zone of absurdity. Death, as we all know puts an end to one’s life, leaving the rest to cope with it; and sooner than later one comes to know that none is indispensible. Rohith Vemula will be forgotten sooner than later though the cause for which he sacrificed his life perhaps would continue unabated.

With due respect to the deceased, I feel like telling the world that it was not needed. He could have lived on, fought against the discriminations that he and his ilk face on a daily basis. The moment he took the decision to commit suicide, I am sure he had forgotten his idol, Dr.B.R.Ambedkar. The architect of our Indian Constitution could have committed suicide several times for it was he and the millions of his Dalit brothers and sisters who had suffered at the hands of the caste system in India much severely than what Rohith had faced. Each Dalit leader in this country could have chosen the path of self-annihilation instead of fighting it out violently and non-violently alike. The history of the Indian Dalit movements could have been different had it been so. Rohith failed to understand the larger picture. But yes, he must have been led to such a dead end where he found it difficult to turn back and fight. He chose to hang himself. 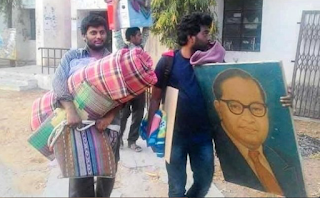 (when Rohith was thrown out of hostel)

Who in this world has not contemplated once the act of suicide? Everyone living on this earth today, for right or wrong reasons, has thought about it; either as a solution or as an escape. People say that committing suicide is an act of cowardice. But it could be an act of bravery also. So many Buddhist monks in Tibet and elsewhere choose to burn themselves against the political authoritarianism of the other countries or even to show protest against the mid path of their own socio-political and religious leaders. Their society has accepted this way of protest, though painstakingly over a period of time. But it was not the same case in India. However, thanks to existential literature and the overt romanticism around the existential creative creature many have chosen the path of suicide and almost all of them have gained the status of eternally young bards. Suicide then was a choice but not a protest. With the thickening of the politically oppressed climate around us has facilitated suicide as one of the options to show protest; Perumal Murugan killed the writer in him when his ‘Madorubhagan’ was banned and his life was under threat as a writer. He made the writer in him to commit suicide.

I ask myself again and again whether this Rohith’s act is justified or not. I am nobody to pass a judgment over his decision. I cannot feel what he had felt as an oppressed Dalit student. But if he was a leader with the guts to stand up against the oppressors, he could never have thought about committing suicide. He was obviously not a guerrilla warrior like the Tamil Tigers who used to carry cyanide tablets around their necks. Rohith failed many and perhaps made many others bold to speak up. He forgot the fact that protests these days have become a vocation for many. Anybody who has faint acquaintance with the deceased one would come out as a living martyr and claim the space that the dead one left without shedding much tears or sweat. This is a vulgar scenario created by the social media. Everybody tries to step into the shoes of the dead without once asking whether the death of this young boy did create a new avenue to fight? Like the films change every week end, the causes for social protests also change these days. Depending on the trending in twitter and in the news channels, deaths of the oppressed also have become the changing locations of protests. 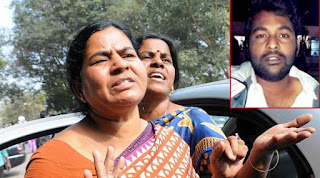 I am not against Rohith or the people who support his cause. Nor do I support the University authorities or the minster who is allegedly the culprit. But I am definitely not with the people who go all over the city thumping their chests in the name of Rohith Vemula. Is his death going to cause a series of deaths? Or is it going to create a social stir that would last till a solution is found to the problem for which he had submitted his life? Or is it going to be the fad of the week and would be pushed into oblivion? Rohith’s death is a loss for his parents and immediate family members. It is a loss for his friends. It is a loss for the cause that he was fighting for. But his death is not going to change the game for the players are not going to stick to the same game for long. They will find new games to protest; they will find new petitions to sign. Like a political party that cannot strive only on anti-corruption plank, protests cannot survive on only one issue. So it is obvious that as days would pass by, Rohith will be forgotten. But we should not let that happen. However the question remains, are these protestors going to remember him for long? Or are they going dip their angst in coffee, drinks, facebook and other distractions with a revolutionary edge?
Posted by JohnyML at 9:40 PM