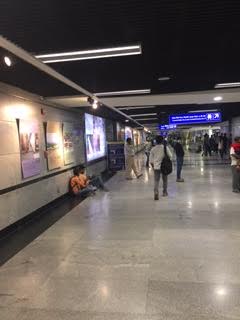 At the busy Central Secretariat Metro station in Delhi, I see a girl child of seven years just accidently dropping her snack that her mother with a sleeping infant cradled across the hands, has bought for her from the refreshment counter over there.

The world seems to have frozen for that child. Astonished, shaken and deeply sad, the child stands in front of that snack, which she wants to pick up but she stops as if ordained by some invisible rules. The mother too freezes. Unlike the rich parents who would pick it up and throw it into the dust bin, this young woman just cannot do it. She wants the child to take it from the floor, wipe it off of dust particles and eat it.

Somehow, I just cannot stand looking at that scene. I walk off.

There are three moments. The moment when the mother’s love and the child’s demand for a snack meet at a common point and happiness swells in their minds. There is a second moment when the child receives it as if world’s best food has been given to her. The third moment is the moment of its accidental dropping.
Children are very special creatures from heaven. They come with a pair of wings. And as they grow up their feathers are clipped one by one, rendering them into people like us; the ordinary mortals. 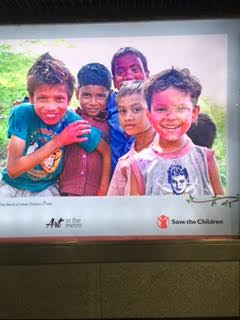 (one of the exhibits at Mandi House)

I take a different line to reach Mandi House, which is a couple of stations away. Inside the coach, with embodied impatience stands hanging from the railings I stand like a silent scream wondering whether the child would have picked up her snack from the floor or not.

The huge distance that suddenly emerged between the child and the snack on the floor weighs me down. If she picks it up, then it must be seen as a willing suspension of both the mother’s and the daughter’s fear of contracting some illnesses due to bad hygiene. If she doesn’t it will be asu huge as the collapse of a gigantic structure of hope, all tumbling over her.

If she would pick it up and eat it, she would forget the incident sooner than later. If she wouldn’t, she would never forget that moment etched in her memory with the acid of desire and despair. In future, for her, the Central Secretariat Metro station would be nothing but the place where she had dropped her snack. Each time she would see that snack prettily sitting in the glass cases in any part of the world, in any given time or season, she would see only that moment of it dropping from her hand and she standing there with her head hanging for the utter loss.

I come out from the coach. Take the escalator to come to the concourse and look at the walls where a few frames are exhibited. I am familiar with the exhibition walls in the Metro stations in Delhi where thematic pictures are exhibited periodically. A project of the Delhi Metro in collaboration with the India Habitat Centre, and several other agencies depending on the subject of the exhibition, these public shows are meant to make people aesthetically aware of the ‘topics and issues’ that are pivotal to the society and are a ‘must know’ for an urban citizen. 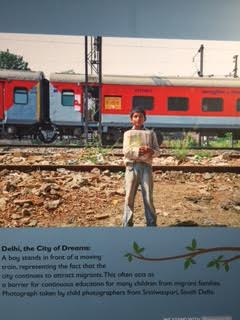 A couple of weeks back, on the same walls I had seen interesting book cover designs. Displayed in collaboration with the Oxford University Press, this exhibition had evoked a sense of pride in me for the simple reason that many of the book covers that I saw there were either read or referred by me previously. A sense of familiarity with any kind of exhibits imparts a feeling of elation to the viewer, which is one of the boons of seeing an art exhibition.

I do not know how many of us stand and stare at these walls and the exhibits on them. Time and again the spiritual gurus of India and the philosophers in general have been telling us to be inward looking people to lead a clear life. Of late we seem to have got the message clearly. We have become ‘inward’ looking people and our inward is nothing but our glowing smartphone screens. Hence, nobody sees what is going on in the world out there. Reality is now a reversed phenomenon experienced in terms of moving and static visuals and data in the phone screens. The world immediately outside of it is more or less non-existent or is deemed as a mere habitat. ‘I look at my phone, therefore I am ‘ is the new motto. If you do not, then you don’t exist.

One of the neon lit boards on display tells me poor sanitation and lack of potable water is the major causes of child death all over the world. Three thousand kids die a day globally because of consumption of unhygienic water and food.

(The girl who has just bent to pick up her snack is stopped in midway. Don’t, my child. I am coming. I could buy one for you, fresh). 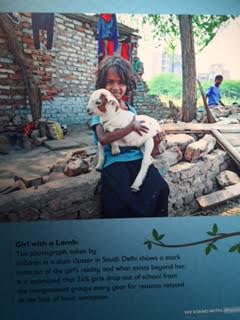 A new exhibition has been propped up in the walls of the Mandi House Metro station. I walk up to them and watch. These are the photographs taken by the children-photographers who live in the slums or shanty towns in North and South East Delhi. These re-settlements are called JJ Clusters, which mean Juggi Jhopdi; the abode of the real Aam Aadmi. Literally speaking, the victory of the Aam Aadmi Party in Delhi is assured by the innumerable votes from these shanty towns.

Non-Government Organizations or NGOs are very active in these zones. More than eradication, they aim at the maintenance of the JJ Clusters with better sanitation, awareness, health and education though they seem to be unachievable dreams. Save the Child is one such organization that has taken the responsibility of handing the cameras over to the children in these shanty towns. Hence, what we see here are the pictures taken by children about themselves.

What makes the photographs visually appealing is the absolute erasure of gaze. A lens man’s or lens woman’s gaze is so powerful that the subject turns into an object, almost helpless in all its authority and autonomy. There are no ‘innocent’ smiles or ‘curious’ eyes or ‘painful’ enthusiasm in these pictures. It is more like a Truffaut film dismantled into different frames.

These kids live in the JJ Clusters. When they are asked to train the cameras at their own life, their approach is completely different than those of the outsider photographers. They just look at the places that they haunt with a sense of celebration and right. They do not have playgrounds. They convert any available plot which doubles up as dump yards into their playgrounds. They do not have swimming pools so they cool off in the nullahs or drains that are filled with chemical effulgence from the factories and general dirt. They do gymnastics over the toxic pipelines.

Twenty four per cent of the girl children from these shanties drop out from the schools. Where do they go? They do not go anywhere. They come to our homes, as maid servants. They come to us as vegetable sellers. They come to us as road sweepers. And a majority of them do not even get mentioned in our lives. They come and go, leaving no traces, but really wounded and scarred. But look at the photographs taken by their own friends. The co-existence of the animal and people, their love for each other is so touching in these frames. 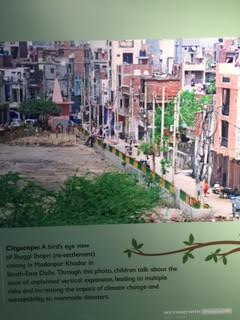 Children are citizen journalists not because they watch a lot of debate television. They are citizen journalists because they know camera is something that registers and take the images beyond the limits of their colonies. And also they know that if the images could travel beyond their colonies, they would communicate their views to others. It is an innate knowledge for survivals. Hence, in their pictures we see eateries at the shore of exposed drains and the heaps of filths. Children know that they are exposing the shortcomings of their surroundings but they do it with a purpose; they need response.

I keep looking at these pictures. Suddenly I feel like standing aside and watching other people, who are in thousands coming out and going into the trains, coming forward to look at these displayed works. For almost ten minutes I stand there to record the ‘viewers’. Apart from cursory glances there are no real viewers. Young people just sit down, right under these frames without knowing what is going on in these pictures.

May be, subconsciously the urban citizen, in his/her impatient and rushing life, imbibe the effects of these pictures, slowly but steadily, I hope.

I wish the children photographers were named.

I also wish the girl child would get her snack.

Very touching... Photographs are a bit closer to my memories… When I was in 6th standard, I had spent few months in our slum with my parents in Okhla and I had been very much attracting by the trashes dumped at nearby drain. I had a good friend there. Her father was working in a potato chips factory and when he returns to his home, he always carried crushed rejected chips with him. My friend always shared these chips with me in almost every morning. This slum is still in its place, still I often visit my parents’ home there, but there is neither my friend nor my childhood… :(