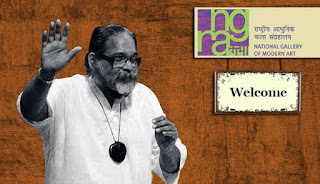 Welcome to Delhi as the Director General of the National Gallery of Modern Art.

Let me introduce myself. I am JohnyML, a Delhi based art critic, historian and curator with twenty five years of experience in the art scene (My deeksha name is Swamy Aksharananda). This letter is written openly because I do not want to make a private meeting with you to talk about the things that I am going to note down here. When you came to Delhi to take charge a couple of months back, a few well wishers had advised me to meet you personally in order to understand what you have up in your sleeves and also to make a personal introduction of myself. I refused to have such a meeting because I do not want you or any other person in the art scene to see my visit as a covert way of asking for favour. I am happy where I am and with what I have been doing all these days.

This is my second open letter to the Director of the NGMA. My first letter was addressed to Mr.Rajeev Lochan who had warmed the seat for over fifteen years and managed do a few good shows but helped only in changing the visitor friendly NGMA premises into a fortress where people feared to enter. I was happy to see the photographs of the opening of Jitish Kallat retrospective, the first major project under your captaincy where I found a few usual suspects standing in the front row though with glum faces. But what made me really joyful was the way it was done in a solemn affair just elegant befitting for an art exhibition opening. During Mr.Lochan’s time, the NGMA premises during the openings of the grand shows used to turn into heavily guarded, barricaded and screened out spaces as top state functionaries used to be the guests of honour for the functions. I used to call the NGMA openings as ‘NGMA Closings’ as it was literally happening on those days. Even the curators of the shows were elbowed out due to protocol or the Director’s enthusiasm to please his mentors on the stage he used to forget to call the curators on stage. I had seen him correcting it during the function. So I make a humble submission to avoid brining the top administrative heads including political leaders to the openings of the NGMA exhibitions. Even if you do, please request them to come without state protocol as lovers of culture and art so that the guests (mainly artists and other cultural personalities) would feel at ease and even the artist of the day would be felicitated properly or remembered intensely than the guests of honour. An exhibition at the NGMA should be a cultural affair than an administrative affair.

Today I saw an interview with you in the city page of a noted newspaper published from Delhi. The points that you have taken up for immediate action and also the projections that you have made are well appreciated for their humanistic and futuristic visions. When you say that you want to turn the NGMA premises a people’s friendly environment and even asking the people to come over to have lunch on the lawns, then I see that things changing there. Your decision to make the cafe active is also a much awaited decision from the NGMA authorities. I have always wondered why the front entrance of the beautiful Jaipur House where the NGMA is located is closed down. It was said that the closure was done for integrating the new and the old wings of the NGMA. I would like to know whether any superstitious belief of the former Director was involved in closing down the front door of the NGMA. I am relieved to hear that you changed your chair from a wall looking direction to a garden looking direction. Please see whether you could open the front door of the building too. I am so happy that you are thinking of the rearranging the priceless sculptures poorly attended and scattered there all over the lawns. You have made other decisions like bringing a Picasso exhibition to India too. I do not know whether you are aware of the fact that in the National Museum there was a Picasso show in late 1990s.

Let me take this opportunity to tell you a few things for I have been living in this city for the last twenty two years and I have seen what had been happening to the NGMA during these two decades. During the tenure of Mr.Lochan, the NGMA had become an elitist institution. After an untoward incident in 1997, when Dr.Anjali Sen was the Director of the NGMA, public-private collaborations were stopped for creating a benchmark for the state institution and making the functioning of it more democratic. Then there was a period of lull and then Mr.Lochan took over. The first thing he did was turning the NGMA premises into a private property. He closed down the research library in the name of renovation and security. A lot of students from the art colleges in Delhi used to spend a lot of time in this library which they fondly called ‘NAGMA Library’. There was a period of power struggle between the three NGMAs which led to the appointment of the regional directors in the two other NGMAs in Mumbai and Bangalore respectively. The dictatorial ways of Mr.Lochan was periodically questioned but he had hold in the ruling party and he survived. In the meanwhile he befriended all his detractors towards 2007 (in his second tenure) and started having public-private collaborations. It was an irony that the NGMA became a second fiddle to the India Art Fair where elitist art has been showcased. With SKODA Prize, the NGMA became a platform for SKODA Prize winners. Mr.Lochan could win over one of the early detractors like Girish Shahane who headed the SKODA Prize.

I am hopeful that you wouldn’t fall into the elitist rut when you negotiate for the public-private partnership. As you have taken the Tate Modern example where the British Telecom helps in grand Prizes and so on, I am sure there are several hopefuls here in this country though different in ideologies would find a chance of backdoor entry through these forthcoming public-private partnerships. They would take the private route as they know that they are no longer ideologically align with the current ruling party or your personal political affiliations with it. Dear Mr.Gadanayak, I am tearful when I say that in this country after seventy years of independence only the English speaking, urban trained and politically connected people could rule over the art scene. They have been doing it through the LKA and the NGMA. I am looking at you (even looking up to you) for making a change to/in this situation. With their middle path carefully taken to travel with the so called secularists of both the left and centre of the left, these art movers and shakers have already extracted the sap of this country’s cultural past and present, leaving rest of the people (vernacular and the small town ones) mere husks and wastes. I am sure there are so many great artists unattended and uncelebrated by the mainstream elsewhere in our country. I request you to keep all the secular and democratic frauds away from the activities of the NGMA.

Let me take this opportunity to make certain humble suggestions to you: This country is so vast and varied with so many different kinds of modernisms sprouting and flourishing in places though unfortunately they are not celebrated by the mainstream. I would request you to find the stalwarts from each state and showcase them in well curated shows in the NGMA. Just for example let me tell you we have Kanai Kunjiraman in Kerala; many many times bigger and better than our Subodh Guptas and JItish Kallats. He is never given a retrospective in the NGMA. In Tamil Nadu there are so many modernists but no comprehensive show in Delhi. In Karnataka, Telengana, Seemandhra, Orissa, Bihar, Jharkhand and so many other states we have had stalwarts but never hailed by a national agency like the NGMA. When an India Art Festival comes abroad, these poor artists are herded like sheep and showed there like Indian craft or Indian art. They are never given a contemporary modern artists’ status, while the urban galleries revel in them. Please cut all these galleries out and engage young and dynamic curators (they are aplenty but only a few are given chances by the galleries and fairs and biennales because they are all English speaking and convent educated) to find and curate shows from their respective states and present in the three NGMAs under your care.

North Eastern States are looked at very carefully. They have been sidestepped by one and all. We have curators from there. We have artists from there. But they are all made spectators in Delhi. Why should we see the Kallats, the Parthans, the Guptas, the Gujrals and so on always. We want see regional modernists. We want to see North Eastern artists. We want to see Goan artists. We want to see the rural Punjabi artists who have been working for the last five decades but never once acknowledged by the NGMA. I request you to think about it. To do that, you should carefully approach the Delhi’s stalwarts. They are all scheming people who have been protected by the secular (?) government for the last fifty years. Now they are once again there in the front row to drink blood from the state coffers. Please do not let them come near to the NGMA. Let NGMA belong to the people.

Last but not the least, I would like to say to you and unto the world, I promise myself to be out of all the projects that you devise in the NGMA or its wings. I just want to see you doing things which have not been done by the mainstream galleries and art establishments here. I do not want any project or even a special treatment of any sort in the NGMA. But my request is to call for a young artists, curators, writers and scholars’ conclave at the NGMA and explain your futuristic vision. Send them all over India with adequate funding so that we could have great shows of regional stalwarts and talents at the NGMA every third month in a year. I will be there to see every show thus done.

Namaskar. Let me introduce myself as a person with least understanding of modern art and I am neither an artist nor an intellectual. But yes, I am an proud Indian and perhaps a servant to cultural gurus and performers around this glorious civilization.

Though I don't merit to comment on the various issues and instances cited by you, yet I am putting forward my submission with a positive confidence that respected Gadnayaka ji will surely take your issues with commitment.

I am enlightened not just because your points are critical to those so-called elitist artists and intellectuals who come together to force their voice and impose their biased-limited understanding of India and her culture upon everybody... but also because you have presented an all round vision which should be adopted and patronized by such National Centres of Art in any country of the world.

With best wishes to Sh. Adwaita Gadnayaka ji and thanks to your heart warming and mind stimulating article, I remain

A humble servant of Culture,