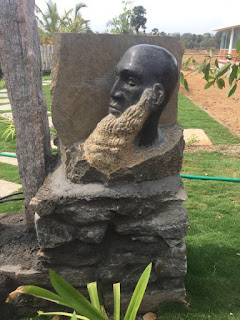 In Vijayan's works, dinosaurs evoke the time immemorial. They are not discussed or described as a part of the fictional narrative of the novel 'Khasakk' but the mere mentioning of them by the author takes the reader to a time beyond Vedas and Upanishads. Vijayan has a time frame even beyond that; it is in this time the two atomised poses, the elder and the younger sisters go out for a stroll. What did the primitive humans do when they wanted to express their difference as well as closeness from / with God? Most say they drew the images on the walls of the caves formed out of rocks. But the sculptors in Thassarack do not seem to be amused by this view. At least in the case of Khasakk depictions, it was sculpture that came first says, Hochimin PH, an artist based in Kochi, who had started off as a painter but today finds is passion and affinity for granite sculptures. 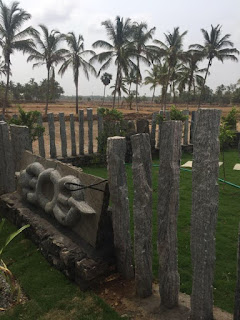 In Thassarack which is the setting for the legendary novel 'Khasakk', today a Vijayan- Pilgrim  could see a series of sculptures carved out of granite. There sculptures mostly square reliefs with a single or composite imagers are displayed aesthetically along a fence created out of granite pillars that demarcate the 'Njattupura' and the present day OV Vijayan Memorial building from the neighbouring plot. The images are familiar for an avid reader of Vijayan and one cannot see these works without a fond smile on the lips. 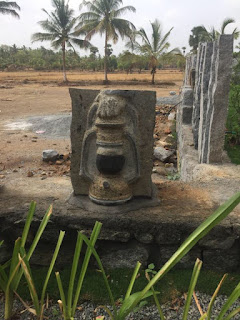 Four artists who made these sculptures possible are namely Hochimin PH, Johns Mathew, Joseph M Verghese, and VK Rajan. The project was dedicated to the cultural scape of Kerala and also to the people of Thassarack in a function held there at the venue on 30th March 2017. This project is not ambitious about its scope is not moderate either. A visitor overwhelmed as well humbled by the memories of Vijayan would definitely be enamoured by the sculptures displayed along a clearly paved way with neatly cut lawn on either side. What makes one feel so close to the artists, the images that they have picked up from  Vijayan's novels and the author himself is the setting against which the   works are seen. One cannot miss the coconut and palm trees lining the field beyond and the sharp sunlight that gives new dimensions to the landscape. The sculptures seem to have developed a soul relationship with the setting. 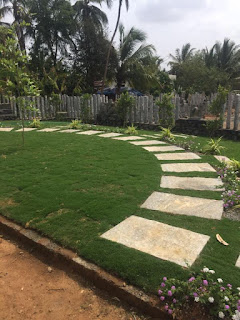 This sculpture project started in 2013. The inspiration for making granite relied sculptures came when these four artists participated in a granite sculpture camp held at  Palakkad sometime in 2011. The district collector was Mohankumar IAS and he wanted the sculptors to make some relief sculptures for the Arch Gate that the District Tourism Promotion Council (DTPC) had created at the entrance of Thassarack. The Arch was done in concrete and the collector thought granite sculptures on it would create all the difference. The very conception of the sculptures that we see today was done in a square relief format meant to be seen from a lower plane. Later that plan fell apart. Though the DTPC decide to go ahead with the project. 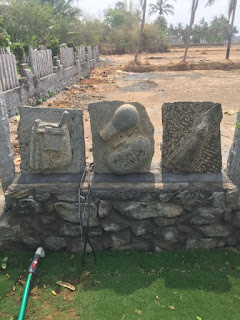 What was once meant for the Arch Gate, now brought down to be seen from the eye level, however, did not put the four sculptors off.  They like any other artist in Kerala loved Vijayan's masterpiece novel. Despite a lag they resumed their work in a compound where today the Vijayan Memorial Building stands. "Njattupura had a pristine look then" remembers Hochimin. " And there was no memorial building there. The compound was open. The heat was unbearable and the local population was hostile." Once upon a time when Ravi, the protagonist sighted from the bus there at Koomankaavu, he did not feel that place was strange. He knew he had been here at some point, maybe in some other life. Like Ravi these four artists also did not find the place strange because more than Ravi they knew the place by reading him several times. 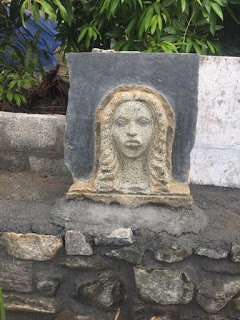 However, what they found strange was the attitude of the people. They simply did not like the sculptors. Slowly and steadily, while braving the hardness of granite and the parching heat of Palakkad, the sculptors realised that the hostility came from their apparent misunderstanding of Vijayan;s novel. They were still hurting from the fact that Vijayan found living characters from the village during his sojourn in Thassarack and turned them  into 'immoral' characters. While the rest of Kerala celebrated Vijayan's novel and the immortality of the characters in it, the archetypes of the characters were fuming with rage. They thought Vijayan portrayed one of them in a vulgar light. That character was nobody other than Maimuna.

Maimuna took her life, her sexuality, her desire, her body, her thoughts, everything in her hands, or at least Vijayan portrayed her so. In Thassarack, with s dominant Muslim community, that lacked literacy while rest of Kerala marched  towards attaining 100% literacy, Vijayan was being misunderstood through misinterpretations by the community elders who too were misled by those people who had misread it initially. With this the women in the village developed hatred for Vijayan's novel. They thought after reading this novel the readers thought bad about the women in Thassarack. The men hated the novel and the novelist for portraying their women self-willed and desiring beings. Both men and women in the village showed their clear and pronounced dislike for those Vijayan Pilgrims who came occasionally to Thassarack to see the setting of their master writer. this was the same ire that the sculptors also had to face. 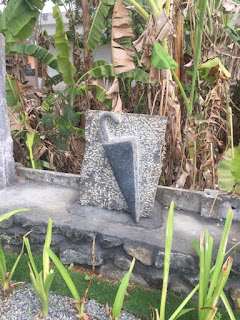 The sculptures that welcome the visitor in Thassarack, are displayed around the legendary Njattupura. The small gate that was the only entrance to Njattupura is now replaced with a huge gate where the sculptors have created a pair of palm trees in granite to flank the door. A snake that just goes inside comes out of a hole in the bark gives an eerie feeling and are also capable of transporting the viewer to the time and space of Khasakk. The names of the artists or the titled of the works are not given at  present though the authorities have assured it to be done soon. However, as Khasakk has become mythical the images extracted by the sculptors are familiar to even the common populace, as they know the novel even if they do not know the sculptors and their ways of working. 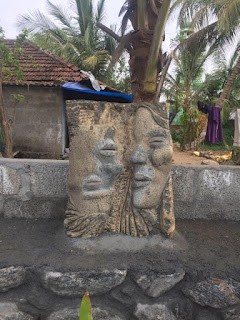 By touching immortal subjects, the artists too become immortal provided they do it with all their aesthetic verve. I should say all these four artists namely Hochimin PH, Johns Mathew, Joseph M Verghese and VK Rajan have earned immortality along with Vijayan, his novel and the characters in it. The immortality part is assured to the artists for two reasons because the works are done in one of the most permanent mediums. Two, so long as Vijayan is kept alive by his literature, Thassarack will be visited by people. Three, so long as people visit this place, the  works done in the enduring medium would generate interest in them. Here I should also add that even if the works have been executed differently by each artist, they could be taken as a whole, as if they were done by a guild though there is no guild per se, in this case. Stylistically, they are not too different as the thought process and meditation went behind it are one and the same. Besides, there is a limitation of the medium and manipulating using human skill and minimum assistance. 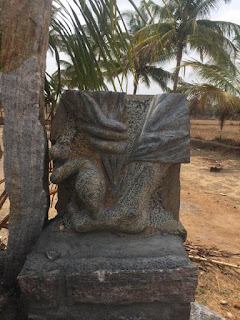 Hochimin, Johns Mathew, Joseph M Verghese, and VK Rajan became full time pursuers of granite after the Palakkad camp (VK Rajan was already known as a sculptor). In 2012, they joined another Lalitha Kala Akademi granite sculpture camp directed by KS Radhakrishnan. Gaining a lot of experience from this camp, they moved to Wynad to do another project in granite for a private agency and in 2013, they embarked upon their journey on translating Vijayan into granite. For me the whole project looks like a temple not project, for Vijayan's Thassarack as a whole is a temple for the lovers of his literature. "Vijayan is untranslatable" says Hochimin, " especially in Granite" he adds. As sculptors, they are still not completely happy for they think they could have done more had time and money facilitated them.

Even if the artists are creatively completely not satisfied with the project they have facilitated a strange alchemy in the people of Thassarack. The hostility has now been vanquished. The villagers are now friendly. Hochimin says that when they went to give the finishing touches to the works in 2017 March, they found a completely converted village folk. They were very welcoming. They seem to have taken pains to read Vijayan for themselves. "Now they do not have any problem with Vijayan and his work based on their village" Hochimin says. He also finds that a new myth has been created by the village folks about Vijayan. "Now everyone has a Vijayan story to tell, even if their age does not match with the time Vijayan had spent here". 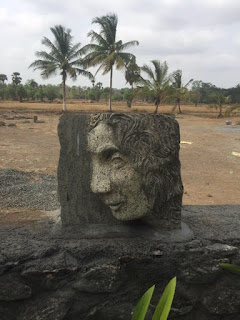 The palpable difference is mainly because of the changes that the DTPC has brought in the village. With the support of the government they have created the memorial hall and have taken special care to conserve Njattupura. In short the project has generated tourism possibilities. The villagers are quick enough to see the  change and are getting ready for a touristic revolution the area. Their changed attitude towards the artists also should be seen along  with the economic changed that such art projects would bring to their society. They also have gone a mile ahead by publicly felicitating the woman who is the archetype for Vijayan's  'Maimuna'. 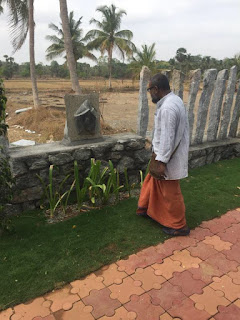 The sculptures could be seen, touched, felt, photographed and adored because like literature that has caused these works, they too are accessible to the people. The local people now frequent the place. Besides, whenever a car stops in front of the gate, in a typical village fashion, many people come out of their home to see the visitors. I could see pride on their faces. The sculptures are democratic and they could be seen against the palm fronds, vast landscapes and at the same time against the washed clothes of men and women drying on the lines.

Thassarack / Khasakk with this sculpture project would attract both the literary pilgrims as well as art lovers. What we need to strive for is to make it more popular by conducting seminars, programs and exhibitions in the venue. Besides, there should be aggressive promotion of it among the domestic and international tourists. That needs political as well as organisational will. Will Kerala develop these qualities sooner than later?

Thank you Johnny for taking time to visit Thasaarak to write this well narrated article on the granite reliefs on Khasaakkinte Ithihaasam.