A Sexy C.V.Raman for the Road to Future: Let’s Begin with asking ‘Why the Sky is Blue’ 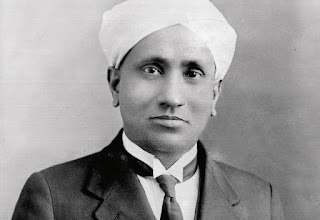 On 22nd December 1968 Nobel Laureate Physicist C.V.Raman while laying the foundation stone for the Community Science Centre in Ahmedabad made a speech, an apparently simplistic speech coming from a Nobel Laureate but loaded with scientific as well as philosophical nuances, which had found its way to the anthologies of speeches that had changed the outlook of the world and initiated the general masses into the scientific spirit of enquiry. Titled ‘Why the Sky is Blue’ this speech was brought to my attention by Dr.Ajitkumar and he promised that the text of the speech would change me for better. Now having read that speech, I would say that Dr.Ajitkumar was absolutely right; here I am, sitting and writing this small note as a changed man!

C.V.Raman uses an ‘academic’ method in developing the speech; by academic what I mean is the spirit of the Grecian academies where Socrates, Plato and Aristotle delved deep into the philosophical issues of life by raising rhetorical questions at times and at other times answering the real questions put to them by their disciples who were only happy to record them for the posterity. C.V.Raman, a Renaissance man whose influence has an unwavering effect on the global scientific community over a century asks a simple question, ‘why the sky is blue’ and explains it based on his life-research that had resulted into the phenomenon called Raman Effect or Raman Scattering.

The rhetoric question here is just a pretext for the great scientist to say a few things pertaining to the changing scenario of the world, especially of India, a young country that had gained its independence from the British and was trying to stand on its own despite the debilitating factors like poverty, illiteracy and an unhappy population. The Nehruvian hopes were waning and the growing religious disturbances were causing a thing of concern. Nehru died as a man in despair; a country with a scientific world view was his ambition which at every step was being thwarted by the divisive religious forces that eyed power through vote bank politics.

C.V.Raman was 78 when he was making this lecture; he too had a Tagorean spirit in him; at once poetic, desperate and melancholic. One could listen to the words of hope emanating from within the words that he articulates, may be in order to overcome the melancholy. He reiterates need for scientific spirit. “This is a very heartening thing because one should not think that scientific work in order to be valuable, should be useful. Scientific work is valuable because it will ultimately prove its value for the whole of human life and human activity. That is the history of modem science. Science has altered the complexion of things around us.” He was not approaching science as a ‘product’ oriented entity on the contrary he had the belief, in an Arnoldian sense, that the disinterested pursuit of science would eventually benefit the humankind for it has eventually ‘altered the complexion of things around us.’

Yes, science does alter things around us but today for making monetary benefits for the corporates that fund the scientific experiments. Hence we could say that today we have a utilitarian science that has subordinated itself to the money machines established by the corporates. But C.V.Raman is more appealing to us today is because he has a contrary view about science. One should say that he has more an idealistic view of science. He celebrates the essence of scientific enquiry than the immediate outcome of it. He says that if one is interested in the outcome, he or she could take a job and get a pay packet but for a scientist enquiry itself is a thing of satisfaction. He says: “Essentially, 1 do not think there is the least difference whatever between the urge that drives a man of science to devote his life to science, to the search for knowledge and the urge that makes workers in other fields devote their lives to achieving something. The greatest thing in life is not the achievement but it is the desire to achieve. It is the effort that we put in, that ultimately is the greatest satisfaction.”

C.V.Raman stands very close to the artistic spirit and in the speech he recognizes the search of an artist and underlines what gives an artist his greatest satisfaction: “What does a poet do? What does a painter do? What does a great sculptor do? He takes a block of marble, chips, goes on chipping and chipping. At the end of it, he produces the dream in the marble. We admire it. But, my young friends please remember what a tremendous amount of concentrated effort has gone in to producing that marble piece. It is the hope of realising something which will last for every which we will admire forever that made him undertake all that work.” What makes the speech more palatable is the scientist’s attitude towards science. He does not ask anyone to sit in the laboratories; instead he says the people to come out and look around. Science starts where your skin ends. Science lies in your immediate surroundings. When Tony Joseph in his path breaking book, ‘Early Indians’ says that to see the first modern human beings who had come out of Africa 65000 years ago you need not even look for a fossil but look at a mirror; there he/she is! We in us carry the genes of the early human beings. Tony Joseph is not far away from C.V.Raman’s spirit. This is the same spirit that finds its expression in Pranay Lal’s book ‘Indica’ where he says that to see the early biological forms we need not go far away but just turn our eyes to our surroundings. It was what Milton stated when he wrote, ‘they also serve who stand and stare’. This is what lies in the Proustian stream of consciousness; this is what Tagore felt when he looked at the sunrise and sunset.

By looking at a Casuarina Tree, Thoru Dutt could articulate the beauty of a morning. From beauty starts the enquiry; what makes the beauty. It could take many lines and the easiest one being the religious and metaphysical one. You don’t know so you could get into the metaphysical ramblings and fix everything to a causative primary being who is the negation of all what you know but the assertion of all what you are. But science moves in a different direction. It asks a question and then pursues the question till it opens up so many avenues of knowledge, at times useful and at times absolutely useless. Scientific enquiry is a never ending enquiry for it discards the absoluteness of everything and assumes the possibility of everything getting better, evolving into new forms of existence. While metaphysics is a dead end, science is a highway which is being laid wherever one is lacking. At times science could get into alleyways and lanes and it could take dirt paths and gravel roads, always with a hope to find a new place, new sight and a new vision. And whenever it wants it could come back to the highway.

We are living in a world where corrupted interpretations of metaphysics for the purposes of religion and vested interested of the corporations (that cleverly use science for money machine and metaphysics for sedation and seduction) has taken an upper hand. A majority of the population has fallen prey to the uncanny charm of the false science. The seduction of it is too irresistible and the irony is that this seduction happens amidst scientific inventions. It is in these confusing times that we need the scientific spirit of people like C.V.Raman whose enquiry starts from a simple question, why the sky is blue and he takes us to the nuances of atmosphere, the formation of clouds, the dust particles, the properties of atmosphere, the transparency of it, the intensity of color spectrum, the varying levels of intensity that the colors could absorb or reflect sunlight, the self-absorption or dispersion of light within the atmosphere, the properties of blue as a color, the day sky, the night sky, the stars, galaxies, the greatness and fun of astronomy and he finally reaches the charm of meteorology; all this by asking a simple question, why the sky is blue.

Let us develop this charming scientific spirit and discard this divisive metaphysics masquerading as religions and vice versa. The bigotry of the political parties could be effectively resisted only through the development of scientific spirit among people. It is a difficult task but it is possible. We need to have the will to do so because we have the technology to spread the message. The seductive power of the violent political establishments that use religion for distracting people to its own purposes is too high and the money power the political establishments wield is enormous; they have the military power in their hands and the policing has become a daily reality. Nazi fiction is going to be a reality in our country soon. Let us look around and look for the scientific clues; let us tell ourselves that the truth is just around us and it is our duty to ‘see’ it. Post truth is postponed truth. Let’s confront blind politics with thousand eyed science, if not with the wondrous eyes of a child that learns the world freshly and undoubtedly.