A Controversial Mural in its Fading Phase: Sreelal’s Mural on Kanakakkunnu Boundary Wall 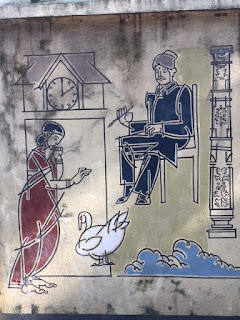 (from Travancore History Mural by Sreelal in Trivandrum)

Sreelal, a Trivandrum based artist would have been hailed as the Nandalal Bose of Trivandrum had he delved a bit deeper into Travancore’s history or rather if he had checked the alternative histories that were available very much in Thiruvananthapuram in the year 2016 when he executed his ambitious mural, the History of Travancore on the 400 feet long boundary wall of the historical Kanakakkunnu Palace, as a part of the ‘Arteria’, a public art project initiated by the Kerala Tourism Department and curated by Dr.Ajitkumar G. 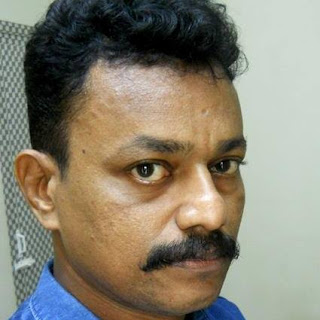 When opened for public viewing formally (though people were curiously watching the development of the mural) the artist received more brickbats than bouquets for the concerned viewers and art enthusiasts had found certain glaring omissions in the episodic visual narratives on the wall. It was dubbed as a mural that served the purpose of the erstwhile Travancore royal family than interpreting the history of Travancore through a visual critique. It was a missed opportunity for Sreelal though I find today the prematurely fading mural attractive in many ways. 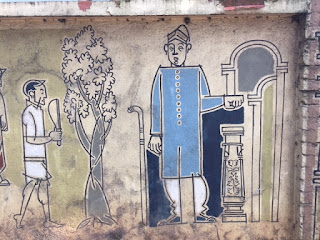 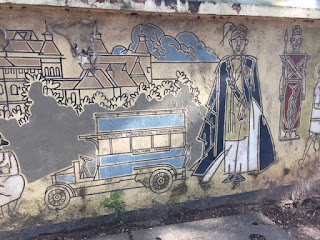 The Nandalal Bose reference does not come by fluke. In 1938 Nandalal Bose aka Master Moshai was asked by Mahatma Gandhi to make a series of panels illustrating the greatness of the rural life of India. Gandhiji was a strong proponent of the virtues of rural life though Ambedkar had pitch fight against such a romantic view for the latter had found city life more helping the Dalits to shed their caste marks and inhibitions, and live a life of near anonymity but saved from the daily disgrace of caste-ist slurs and inhuman treatments by the upper caste people. Though Ambedkar’s views did not prevail due to the larger and deeper influence of Mahatma Gandhi, Jawaharlal Nehru had seen the truth in Ambedkar’s views despite the fact that he could not do much towards realizing Ambedkar’s dreams regarding a casteless society, due to the electoral politics and the gradual depletion of the Congress Party into the pits of upper caste Hindu ideology. 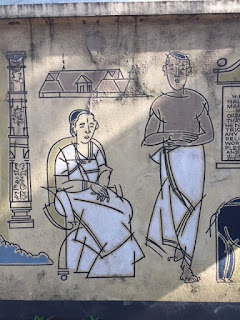 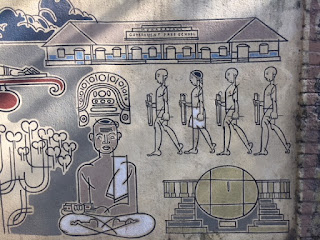 Nandalal Bose shared Gandhiji’s romantic idea about the rural India and its legendary virtues; as the seat of goodness and camaraderie, which was contrary to the facts. Bose took up the cue given by Gandhiji and made a series of pictures that lauded the imagined rural life of India. We could say that they were the tableaus of Indian rural life. Life film stills, they were frozen narratives, a moment caught in time and space, as imagined by a visionary artist. Haripura panels did capture the virtues of India’s rural space but it also hid the atrocities meted out to the depressed class people under the caste system. Everything was fine with the rural life, one would think upon seeing those images, which was the aim of Gandhiji; the perpetuation of his Swaraj dream where the autonomous villages functioned smoothly by accepting the caste hierarchies as god given structure but without the vileness of the oppressive caste system that was in practice. 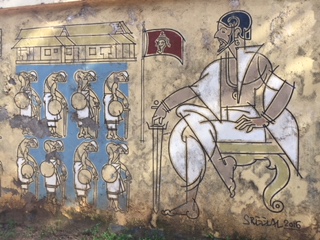 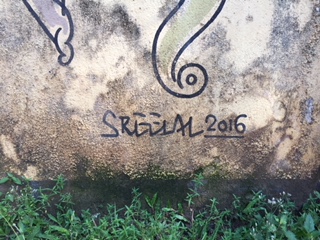 I do not think Nandalal Bose was ever criticized for not presenting the darker side of rural life because it was being thought as blasphemous to take on two godheads of the time, Gandhiji and Nandalal Bose. In retrospect we could forward this critique though nothing much would happen to change the legacy or the suspension or nullifying of the series, which anyone attempts to do so would end up in self-annihilation and denial of a cultural past with its own drawbacks. Sreelal, however should have been much perceptive when he was given a chance to deal with the history of Travancore and the glaring absence of the Renaissance leaders such as Mahatma Ayyankali, Sree Narayana Guru, Thycatt Ayyavu, Chattambi Swami and so on. By denying them pictorial space, Sreelal was almost committing an artistic hara-kiri at least in terms of the hugeness of the public work that was given him to execute. A second chance never comes and even if it comes it comes too late. 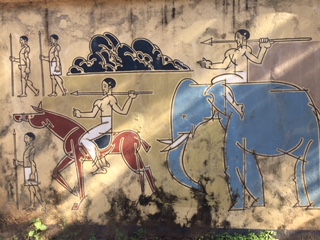 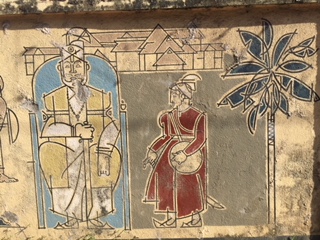 Sreelal’s mural is impressive. He captures the history of Travancore from Veluthampi Dalava, a 18th century royal leader of Travancore who fought off the British East India Company as well as various rebellions from within the Travancore state, to Swati Thirunal and Sree Chithirathirunal Balarama Varma one of the last kings who lived through the 20th century. In the episode, Sreelal brings out how Travancore progressed in various fronts including literature, art, music, warfare, education and devotion and so on. The narrative however stays closer to the court history and the ordinary people appear as laborers within the states who did mostly menial jobs including farm labor. The Nair community is portrayed as warriors. Through certain tonal variations Sreelal shows the difference in complexion therefore the difference in social class and caste. There are the arrival of trains, motor cars, schools and theatre. We could also see Raja Ravi Varma in his studio. Unfortunately, when he depicts the school in Travancore, he conveniently forgets the legendary episode of Ayyankali and Panchami at the Venganoor school where Ayyankali took the Dalit girl for education and the denial of which had changed the course of history of Travancore history then and much later. So are the absence of Sree Narayana Guru and Chattambi Swami, both social and community reformers. Interestingly we could see Gandhiji doing satyagraha (1924) during the Vaikom Satyagraha that had demanded the public road around the temple for the use of all other castes including the Dalits. 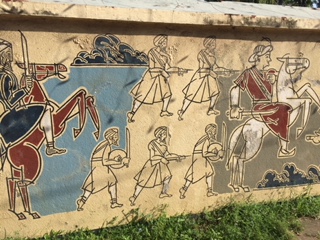 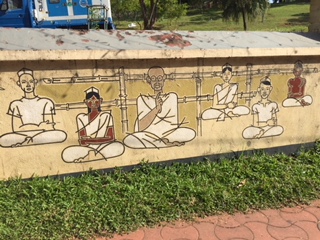 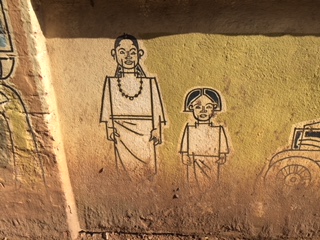 The mural is now undergoing various stages of decay and collapse. This mural was not supposed to be a permanent one however, the preservation of it would have helped people in understanding both the present and the absent. While I would hold the artist responsible for the absences, I would appreciate the artist for doing a very agile and strong narrative by picking and choosing certain memorable moments from the history of Travancore. The social hierarchies are narrated adequately but he emancipatory acts are not vivified in lines and colors. Sreelal has a distinct visual style and he has employed it quite boldly and freely in this mural. We cannot stop its gradual decay, it seems. However, I hope Sreelal would be all the more conscious if he gets a large commission like this in future and he should invest time in studying the mainstream and alternative histories of the place before executing the work.