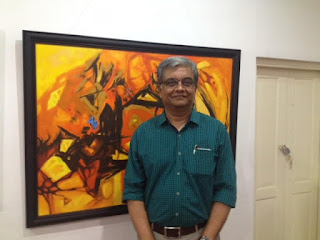 Paintings get lost. Paintings get found. Lost paintings live on in digital or electronic images the way dead people live on in photographs. Dead people leave some traces; lost paintings generally don’t leave anything. Sometimes artists forget them altogether till they are rudely reminded of their absence. The knowledge of loss is more painful than the loss itself. If the artist doesn’t know that the paintings are lost they are fine; but the knowledge makes them painfully nostalgic. Some paintings are found in the attics, some in rolls, some in plastic pipes, some inside bubble sheets, some on the walls of friends’ drawing rooms, some in the drawers of old tables. In the case of a famous artist retrieval of a lost work or a body of works is an occasion to celebrate. If he is dead and gone, still there will be some celebration for it could strike gold in the auction market. But for a poor artist, finding an old work is finding a prodigal son, broke and wasted, in the old age. Where to keep him is again the question and also what to do with it. 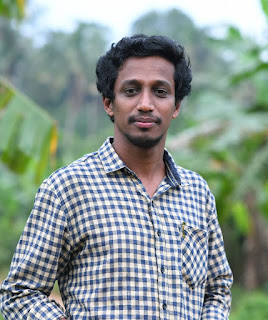 Many an artist finds it difficult to keep the old works in order and archived with proper information. Works of art generated during the formative years of an artist are destined to be lost. They are not really lost; at times they are abandoned. Artists leave them with their settled and affluent friends, with a promise to pick them up later, a promise that is never fulfilled. If the said artists make it at some point of life, suddenly the keepers of the works remember the treasure that they hold. If the artists don’t make it in the market, after a few reminders, the keepers would abandon them. If you see a work of art, pretty much in good condition or losing sheen with time in the second hand markets, be sure that there is an artist somewhere in the world who has lost that work to a friend, an erstwhile reluctant but benevolent patron or someone who has gone awry and needed to pawn a work of art from the family’s holding. Each lost work is destined to be found somewhere else beyond recognition by the people who see it, if they have not destroyed by the ruthless time, insects and human beings. 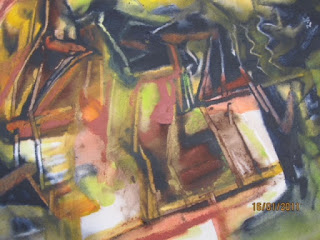 An old work of art thus lost and found elsewhere without the knowledge of the artist who had made it has its own use value. Those people with spurious reputation for making fraudulent copies that exactly look like the original, including the signature of the artist, do buy these lost works from the secondary markets and make use of those canvases and frames for painting on the images of some master artist from a particular time period in his life so that they could pass it on as an original done on an old canvas that dates back to the image in demand. The frames are equally useful. The new works done on old canvases are framed in this old wood so that none would even question the originality of the work. Some of you may be thinking of the paints that have been used for making the fake image. The frauds do collect old paint stocks directly from the company discards and use them for painting the fake works of art. At least twenty per cent of the works that move in the market are fakes thus made original. 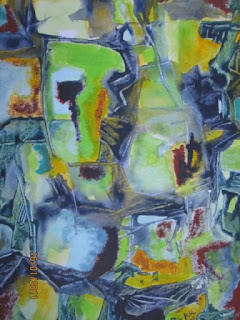 Artists who have lost their works in their original format would never try to make the copies of it. They just do not want to do that because they consider the image and the passion with which they had done those paintings sacred. They don’t want to impose profanity on them by painting at the same on a different surface. Another factor that prevents them from attempting the same works again is the time that has passed between the lost works and the types of works that the artists are doing at present. They may not be the same. Like everything else in the world art styles too change with the ageing of the artists. The works may look the same but there are minute changes in them. A singer may be singing the same song for the nth time but each time he renders it he makes certain changes in it and is recognized only by diehard listeners. Rendering of a song could be affected by the temperature in the hall or in the atmosphere, the audience response, the accompanists and the city where the concert is performed and so on. A painting is never repeated; may be it is repeated in form with almost likeness but the spirit is never the same. A copy is a copy is a copy even if it is done by a master artist. That’s why artists never get tired of painting the same theme because each time they do it they do it differently though it looks the same for the untrained eyes. 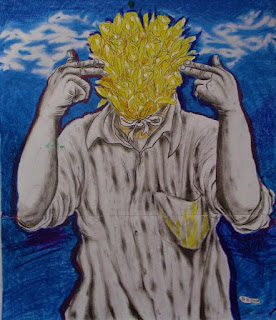 Dead people are dead people but lost paintings are not dead paintings. Dead people are dead because others see them their dead body. Seeing is believing in the case of death. A missing person, even if he is dead for years, is never a dead person simply because the others have not seen his dead body. There is always a chance of him coming back, may be after a hundred years. Lost paintings are like lost people. The artists will never believe that they are dead. If the artist has seen it being destroyed right in front of his eyes, he would believe that it is dead. If it is simply lost, there are chances of it one day knocking at his door, if not in the form a canvas or paper roll, in the form of a courier boy, a journalist or a buyer himself who has come knocking for getting an authentication certificate and a photograph with the work from you. You never know what is going to happen to a work of art once lost coming back to you in the form of a precious bond. Once turned into a market commodity, a work of art can create wonders for the holders, if not for the artist. 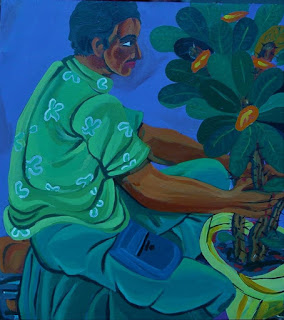 There are many things in our lives that go missing; a watch, a pen, a purse, a gold ring, a vessel, a muffler or woolen cap. One day, as you search for something else, they just pop up from some unexpected corner in your own house. You wonder why you did not notice it all this while. But with a beautiful but tired and old smile you welcome it back to your life. The work of art thus found may look a bit out of place in your studio as it watches the current body of works that you are doing now. But once propped up on an easel you could have a silent conversation with it, hold it, look at it, may be cry a little bit, exactly the way you do when you see a long lost friend again. The shocker of your life may come when you see your lost work displayed in a gallery that you don’t have any clue of having contacted or sold to. The shock would be doubled if you see the same work of art is signed and displayed by another artist! So long as you don’t recognize your children once lost in a fair ground they could stand right in front of you as a stranger and even share a smoke or a drink with you. But the problem floods in when you recognize your child. It is always better to have their life as they have it now. The moment you get involved legalities would follow, and your age and demeanor may not be comfortable in pursuing a legal course. May be you are married again and the current spouse do not want those middle aged children back in your life! A true parent is an old parent who looks at his lost child after many years with a lot of pride if he is doing well, and suffers silently if the child has not lived up to your expectation.

(Today I found two artists, Dr.Raman Kutty and Amal Pirappancode reminiscing about their old paintings irretrievably lost due to many reasons. Reading their views on it this rumination took me over and I typed them out for you to read.)