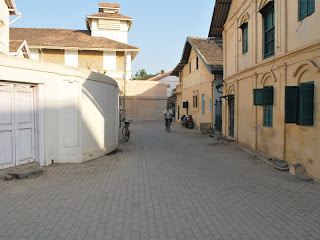 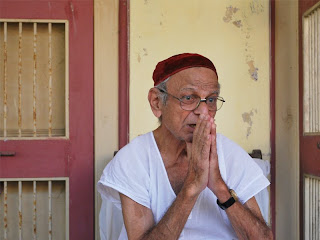 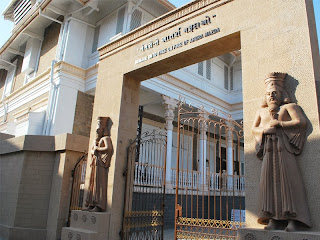 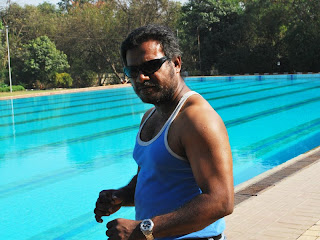 Cool breeze from the Arabian Sea wafts through the paved alleys of Udwada Gam. Each house on the either side of the alleys is a block of silence. It is three o clock in the afternoon. Slanting sun rays pass through the dust raised by the children going back home from school, light up the place in a hazy mode.

Most of the houses are double storied and have a very Spartan design. The verandas are large and minimally designed Teak wood furniture adorns the spaces. Each house has a stately swing in its veranda. Time and silence sit on these swings and stare at each other.

Udwada Gam, near Vapi in South Gujarat, looks like an abandoned village. While walking through the winding alleys you can imagine nothing but the paintings of George de Chirico. Anytime from any turn, someone can appear before you. A long shadow of a child running with an iron ring can come into your ken unexpectedly. In Udwada you are caught into the web of history.

Udwada is the first Parsee settlement in India. And here you see the first ever Parsee temple with ‘Fire’ as the idol. The temple seems to have got a facelift recently. The façade looks washed and cleaned. A middle aged Parsee man sits at his veranda, just opposite to the entrance of the temple and a signboard written in Gujarati shows that he sells the best ‘Malabari Sandalwood Battis’. There are two security men there in the street. They seem to be bored to death.

None speaks here. No voice is heard. It seems that there is a pre-written script and that script is blank wherever dialogue is mentioned. A silent movie of pious old people.

Somu trains his camera at the temple and just then a very young couple in embroidered white clothes appear before us (I should add, like angels) and tell us in a polite tone, “No Photographs please.” The couple hold their hands and vanish into the temple.

‘Only Parsees are allowed,’ a signboard says. Unlike in the other pilgrim places, no bustling business is seen here. If at all they sell, they sell only sandalwood agarbattis. They consign this wood to the fire in the temple. The temple is devoted to Ahura Mazda, the Zorashtrian spiritual head and the fire in this temple is believed to be around two thousand years old.

“One day, a Police officer brought his family to visit the temple. The security men told them that they were not allowed. But they were not convinced. Then I came out of my office and talked to the gentleman,” remembers Mahirwan Dastur, an eighty two year old priest whom we chance upon.

He sits at his old chair in the veranda of his house and we stand outside of the gate which is around six feet away from his chair. He does not invite us, nor do we ask for entry.

“I told the policeman why Indira Gandhi was not allowed to enter the Tirupati Temple. She was married to a Parsee and that was the only reason. Each religion has its own rules and regulations. We need to stick to it. The police officer was convinced and he left the place without any grudge,” Mahirwan Dastur continues.
Parsees came to India in 1742 AD. They were facing persecution in their homeland, Iran. Thousands of children, women and male folks were killed. As a warrior clan, they did not want to live in shame. Hence they consulted their astrologer and the astrologer asked them to move southwards. Thus they reached Diu. Then they moved towards Sanjan, Gujarat and temporarily settled there.

“We were quite a lot of people, the story goes like this,” Mahirwan Dastur tells us. “We requested the king to give us land and food. But the king sent us a jug full of milk. Our forefathers were surprised to see this act of the king. How could the king send a jug full of milk for hundreds of people? But soon they understood the meaning of it. The king was suggesting that the country is full and there was not an inch to spare. But our ancestors were intelligent and well-meaning people. They added sugar in the milk and sent it back to the king. The king got the meaning: the guests are ready to become one with the host country, the way sugar dissolves into milk. The King allowed us to live here,” he recounts the story for us.

Then the Parsees moved to Vasda and to Navsari. Meanwhile internal strife, in terms of religious practice was brewing up amongst them. But they finally decided to come to Udwada as the king of Udwada was happy to have them around. The first Parsee settlement in India started in Udwada after a few years of exodus.

Udwada got its name from Unt Wada. Oont or unt means Camel. This village was the place where the king used to keep his camels.

The temple was built almost two hundred and seventy years back.

The Parsee life was changing fast throughout the centuries. Now in Udwada, you find only old people. And rarely young couple, like the one who warned us about photography. Many houses are in an abandoned state.

A single zero watt bulb is on in the veranda throughout the year in all these abandoned houses. On the one hand it could be seen as symbolic fire worship even at the absence of the household people. On the other, it is a very practical move that the electricity board will not cut the supply as the houses are abandoned. Technically speaking when the electronic meters are on, the house is in use. The properties are still owned by people who have left Udwada years before. They still pay the electricity bill to maintain the ownership.

I have seen the same in the Bohra community’s abandoned houses in Partapur, Rajasthan. The Bohras have migrated to the Middle Eastern countries. But they keep their properties here. Parsees also do the same. But they have a different history.

“We were taught in Gujarati medium,” says Mahirwan Dastur. “It was not enough to get jobs or live in a competitive world. People wanted to progress in life. So they started migrating to the cities like Bombay, where they found their success in life and business. This tendency of migration started almost two hundred years back.”

Mahirwan Dastur also had gone away. He served in Zanzibar, Africa, for fourteen years. But he came back and settled his ‘hometown’ Udwada. “I am born here, brought up here, educated here and I want to see my end here. I am an Indian,” he says.

But many of the Parsees do not think so. They are urban oriented and they have proved their worth in these places as successful businessmen, advocates, artists and so on. I remember Tata, Soli Sorabjee and Jehangir Sabawala.

Now the population of Parsees all over the world is around one lakh. Out of that, seventy thousand Parsees live in India itself. The Parsee population is on a downward slide.

Reasons are many but it is a well known fact that they don’t want their racial links to get mixed up. Parsees want to keep their blood pure. Hence, inter religious and inter caste marriages are not allowed. Most of the Parsee men get married at a late age. If at all a Parsee boy marries a non-Parsee girl, the girl will not be allowed to enter the temple. She will not be considered as a Parsee. If a boy is married into Parsee family, he also will remain as an outsider. Interestingly, the children will be brought up as Parsees.

With receding population and urban oriented migration, Udwada has only old people. They are looked after by the local communities and many of them live with the old people and look after them as they look after their own parents.

“Where is your family?” I ask Mahirwan Dastur.

“I am not married,” he says. “When I came back from Africa, I was jobless and homeless. I did not want to marry. Above all, the astrologer told me that I should not get married. My marriage would have been as disastrous as a thunder strike.”

Mahirwan Dastur smiles. I measure the distances he has covered with that smile. Now left alone, and left at the mercy of a community and the benevolent local people, Mahirwan looks like a man still in his exodus.

While going back, we see lonely men and women sitting at the verandas of huge abandoned looking old houses.

It is painful to see old people alone. They are all silent and still on an exodus. They want to go their father’s land- no, not to Iran, but to the land of soothing fire.

PS: I try to strike a Wesley Snipes posture at the pool side in Atul Club in Pardi. Somu registers my antics.
Posted by JohnyML at 11:29 AM