Between Mirchi and Gucci 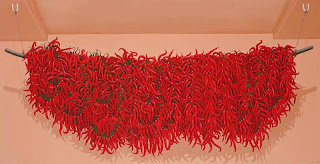 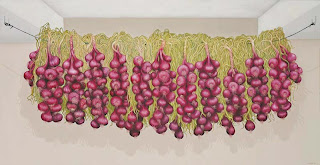 Madhu V calls his Delhi debut solo, ‘Vernacular/Suspended’ (at Palette Art Gallery). The title explains Madhu’s stance on art, aesthetics, life and its philosophy. The emphasis is on the ‘vernacular’, the side-stepped, the off-centered and the de-invested. And above all they are suspended, in a sort of suspended animation. Vernacular in suspended animation, I would like to qualify them so. As the images in these works are vernacular, the viewer, who has already pushed his own vernacular behind the polished linguistic facades, needs a bit of initiation into the realm of images that Madhu creates.

Most of the images, which are seen hanging from the roofs, come from the collective memory of a Malayali. In Madhu’s suite we see this collective memory getting cleaned up, sanitized and museum-ized for a dispassionate perusal. These hanging utensils, implements and objects had once played a very active role in the daily lives an average Malayali. These were the visual codes that marked the qualities and quantities of an agrarian economy and interestingly all these visual codes had their verbal equivalents, which together made the social exchanges possible.

Economic changes primarily and fundamentally affect the quality of social exchanges. The visual-verbal linkages are ruptured in this process. While the visual codes remain in a symbolic realm of exchange, as a part of cultural authentication, its verbal correlatives go into oblivion. When a verbal code is shifted from an active field to a very passive field, it gains a value of taboo around it. Hence, we can say that there is always a ghostly linguistic pattern behind every active linguistic pattern. Images, similarly consigned to the archival symbolism, too become a ‘negative trace’ of the visual language.

This linguistic trace, which is of course ghostly, that Madhu brings back to his pictorial imagination, generates a lexicon of visuals, a sort of volume of/for ghosts, which do not intend to haunt. Madhu deliberately removes ‘time’ away from the images. The artist conjures up a visual world of vernacular objects, which is as systematically classified and categorized as in an actual lexicon. The word, the code, the phonetic intonations, meaning, interpretation, and the synonym and the antonym are obliquely presented in the actual ‘hanging’ images.

When brought back to ‘use’, vernacular can create surprises. Sudden introduction of the vernacular into the ‘national/normal’ stream of ‘language’ results into rebellion, laughter and analysis. Vernacular creates a different benchmark and it re-sets the parameters of the social exchange. It consecrates and desecrates at the same time. It shows an alternative and also emphasizes the impossibility of going back. It shows the glimpses of a Utopia that had never been and never will be. It confuses the listener/viewer. Vernacular, with its raw power disorients the mainstream.

There is a sense of desolation and silence in Madhu’s works. It is the only indicator that makes the viewer to think about Madhu’s existential concerns. Otherwise, as Satyanand Mohan, the catalogue writer points out, it is about the celebration of labor as pleasure in an agrarian economy. The pleasure-pain principles of labor are taken out of these objects and images. The artist, as I mentioned before, presents them as archival museum objects, cleaned and preserved.

The power of vernacular is palpable in Madhu’s works. But where does the artist go from here? The archive that Madhu searches in seems to be so vast. But then just painting each and every finding from it would not serve any purpose, I feel. It will be the multiplication of the same. In this show, Madhu has flaunted his creative muscles with an obligatory object installation with red chillies and wooden cot. Scale seems to be one of the limitations in Madhu’s present suite. They seem monotonous in their repetitive scale. Madhu needs to make a big leap and the painterly sophistication Madhu shows in this show will not help him to articulate all what he wants to express.