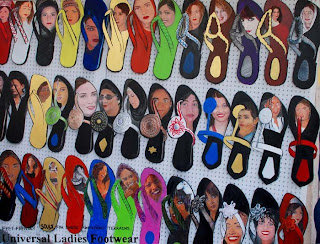 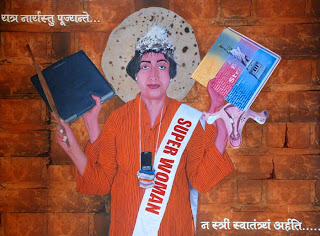 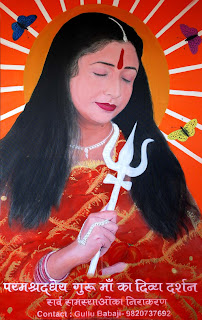 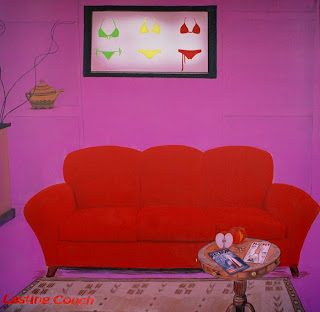 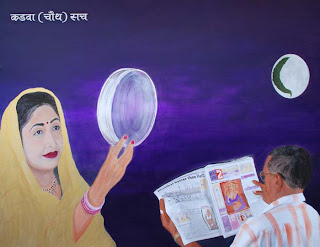 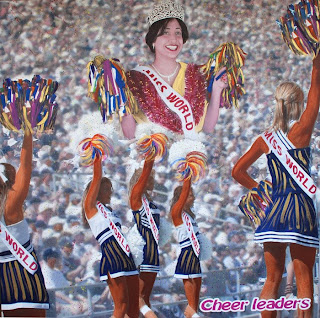 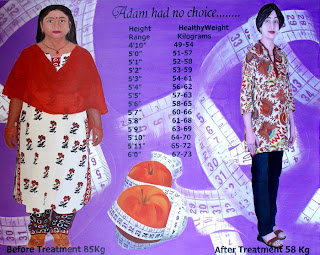 (Meenakshi Patil’s show opens today (5th August 2009) at the Point of View Gallery, Mumbai. Following is the catalogue write up I wrote for the show)

What do you do when the mud of social injustice is flung at you on a daily basis right there in the public realm as well as in the domestic sphere? You see people laughing at the sight of your mud smeared face. You feel like ‘reacting’ and on a second thought you decide to smile at them; a benevolent smile that would blunt all those sharp scorns eventually. Smile/laughter is a philosophical possibility and it is used the way people use tag lines in their email ids and profiles in networking sites. Laughter accepts humiliation with humility and at the same time it becomes a weapon in itself to box down the humiliation.

Meenakshi Patil’s paintings are not the reactions but the ‘responses’ to the social injustice and imbalance seen proliferated in the gender relationships in our society. The artist at the outset itself refutes the possibility of her being included in the category of ‘feminists’. These paintings, predominantly dealing with feminine issues, in a way deviate from the academic feminism and find their place in the streets, or to put it in other words, in the ‘locations of femininity’. The realism that drives the thematic of these paintings into the viewers’ memory as ‘local’, ‘familiar’ and ‘identifiable’, is a conscious stylistic choice of the artist as it could open up an affable discursive field without entering into the jaded academic discourse on feminism.

However, the positioning of subjectivity within the laughing and laughable narratives, should be seen as an attempt by Meenakshi for guarding against the possibility of trivialization. I would compare these paintings as a purposeful ‘Lavani’ performance rendered in two dimensional forms. Meenakshi being a scholar in Marathi culture and literature must be aware of the potentiality of Lavani dance as a form of social titillation through suggestive sexual potentiality (of the woman who is performing and the subject in performance) as well as a critical tool to lampoon the social ills. Lavani dance is a hierarchical and gendered performance. However, interestingly, it arouses and erases the embedded hierarchies simultaneously, paving the way for seeing the performance as a critique than as mere titillation.

In a sense, the laughter heard and seen in a Lavani performance is re-presented and simulated tangentially in Meenakshi’s paintings. The feeling of loudness (of colors) and lewdness (of posture) underlined by the flashing laughter is imparted consistently by these paintings. The local and the familiar are repeated in an exaggerated performance (of painting) rendering these works more performative than painterly. Meenakshi tickles the evident to the contorted thereby creating a space for the viewer to enter either to follow the contortion (which would lead from the visible to the intended) or to trace the original (only to evoke the familiarity of consumption).

Meenakshi takes off from and lands back in the field of consumption and desire, where the ‘woman’ is hailed as heroine, consumable object, sexual icon, ultimate sacrificial lamb, selfless provider and so on. Though we partake in this ideologically loaded discourse without feeling guilt, any one poking at an alternative possibility becomes a location to deviate and laugh. Meenakshi facilitates such laughter through a device, which I would call ‘urgent parallelism’. She takes images from the familiar surroundings, make parallels out of them in order to satirize subtly the ways in which we identify things as ‘good/bad’ or ‘black/white’ or ‘permissible/non-permissible’ etc. Meenakshi makes an internal narrative linkage between the quotidian (as in Newspaper advertisements) and the divine (as in the advertisements of holy fathers and holy mothers), and between the popular (as in casting couch) to the ritualistic (as in Karva Chaut). One cannot escape the internal mirth that the artist feels when she critically reduces the dominant male ego into a curved phallic bitter gourd (poking at the possible arrival of diabetes during the middle age- read it into Mid Day newspaper image).

Meenakshi Patil has always been a topper in literary studies and she is an accomplished poet (I deliberately avoid using the word ‘poetess’) in Marathi language. This must be one of the reasons that she alludes to punning of words and the ideas evoked by words and phrases. By incorporating a set of verbal graffiti in her works, she achieves a certain amount of narrative flair, which would enhance the satirical effects, which at times her autobiographical self itself willingly yields to. While celebrating a woman’s internal world of thinking using laughter as a tool, Meenakshi consciously forwards a critique on the women celebrities like Oprah Winfrey and our own Jayalalithaa who are obsessive shoe collectors (does it sound like bone collectors?). They never know that their collections surreptitiously express their fear of turning into footwear themselves within a world of male ideology. Meenakshi’s gesture in this context is quite Andy Warhol-like. You never make out whether Warhol says ‘yes’ or ‘no’ with his mumblings. It could be anything. And Meenakshi uses this enigmatic positioning throughout her works.