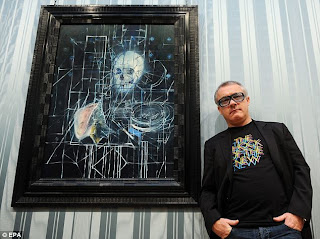 Hirst is at it again. Damn it! You may say. But he is Damien Hirst.

He says, he cannot believe any more on photographs and usual display in galleries. So he chooses a museum, right next his office, convenient. Wallace Collection Museum, London is where Damien Hirst makes his latest statement through twenty five paintings.

The show is titled ‘No Love Lost Blue Paintings’. He has been painting these works since 2006.

Adriane Searle, the art critic of Guardian comments, “This is painting as method acting. He just keeps at it. Hirst's paintings lack the kind of theatricality and grandeur that made Bacon succeed. At its worst, Hirst's drawing just looks amateurish and adolescent. His brushwork lacks that oomph and panache that makes you believe in the painter's lies. He can't yet carry it off.”

Many well known critics say the same. Damien Hirst does not have a painterly flair. He is good at his pickled sharks and animals, and the bizarre beauty of skulls, they say.

But Hirst begs to differ. He draws heavily from Francis Bacon and he enjoys the works of Rembrandt.

Now Hirst is the biggest supporter of ‘paintings’ and ‘museums’. Galleries and contemporary works can take rest for the time being.

And he says that art market can be created by just two crazy people.

Oh yes…now it is our time to think on Damien Hirst’s latest move because we are a country full of artists who are not X or Ys. But they are Indian Damien Hirsts and Indian Andy Warhols. So when Damien Hirst makes a move we cannot sit idle.

But step in caution. What are we going to do with our art market and its style of functioning now?

As a curator and critic, I have been watching the change of track by the Indian galleries for quite sometime.

In 90s, there were few galleries in India that even looked at photographs, installations and video works. They said, you can do installation, ‘but the medium should be oil on canvas.’

Then almost after a decade we have a situation here. Look, we need some installations, some photographs, some digital works and some videos in our shows. Paintings, okay.

Recently a new born gallerist even dared to say, ‘Canvas is dead.’

All of us know what made all the difference. Suddenly there was a change of pattern in the way of international investment in art. The investors from all over the world wanted non-painterly works. Subodh Gupta made a lot of difference. Jitish Kallat and many more. Skulls and bones became a fashion.

Somebody told me recently that there was a reason for all these changes. There is a secret organization somewhere out there called Skull and Bones and they control the international economic situation. And it is their agenda to promote skulls and bones in art.

Exotic and symbolic it sounds. But we have a lot of skulls and bones in our works. Now more brains, ligaments and penises.

Suddenly, in Indian scene too painters became a sort of outcasts.

“I am multi media artist. Multi faceted too.” Facebook artists scream. Then they add sheepishly, I paint too.

In the process we side stepped brilliant painters like Shibu Natesan. A market slump could place Atul Dodiya out of discourse. Surendran Nair, a veteran.

Am I against the new media art? Not at all. New media art needs a space, time, attention and market. For that we should not have scorned painting.

But somewhere, of late, we have started posing that we hate painting.

Now Damien Hirst with his Bacon style paintings and his all out self endorsement with legendary painters like Goya, Soutine, Rembrandt and so on has created some ripples, which could change the course of art market.

So what are we going to do?

Are we going to redeem our good painters from oblivion?

Our art market is not yet matured. It needs to go through the baptism by error. If we stop all our experimental promotions and go again behind painting only because Damien Hirst is all for painting, we are going to ruin our art market big time.

At the same time, if we just neglect the good painters in India and go behind pop up fortune hunters disguised as new media artists, we are going to crash down somewhere in the near future.

Learn it from Hirst. His paintings are talked about because he dared to do his stuff when he wanted it to be so.

Let our artists mature in their own ways. Don’t drop them only because they do new media art, which Hirst no longer endorses. Don’t drop our painters only because some crazy market makers said painting was dead.

Damien Hirst is not the way but a direction. If we don’t learn it from his whims and fancies, we will produce only Indian Damien Hirsts.

Learn from history. If not, as Manjunath Kamath puts it, “We will end up as T-shirt pictures in a flea market; local icons with no future.”

The argument is so true, its not about new media or multi media.Its about how quick we were to do away with 3000 years history of thinking through drawing and painting.

Yesterday I attended the opening of A.Ramachandran's show at LKA Delhi. His colors and lines...