Story of Many More States 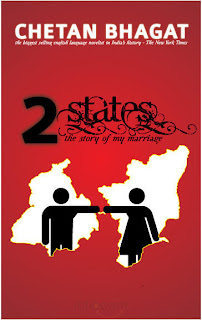 ‘2 States- the story of my marriage’, the latest novel by Chetan Bhagat, is a sort of ‘DDLJ’ in print; but with a small difference in the plot. In DDLJ Raj Malhotra (SRK) courts Simran Singh (Kajol) and he crosses seven seas to convince Simrin’s reluctant parents. Here Krish Malhotra crosses a few states in India to claim his lady love, the Tamil beauty, Ananya Swaminathan. It is an interesting but strange coincidence that ‘2 States’ is released in the same month when DDLJ celebrates its 14th year in theatres. It is reported that Maratha Mandir, a single screen theatre in Mumbai has been playing DDLJ for the last fourteen years to a more or less packed house ever since its release. It was twenty two rupees for a balcony ticket in Maratha Mandir when DDLJ was released. It remains unchanged after fourteen years. Chetan Bhagat’s first book, published by Rupa and Co in 2004 was priced at Rs.95. The latest book also is sold for the same price. Somewhere the author comments that the price of milk and other items have gone up since 2004 but the price of his books remains the same.

Chetan Bhagat’s novels deal with the ‘middle class’ India. To be precise, Chetan deals with the moral and ethical dilemmas of a middle class India, caught between modernity and tradition. Within the generic notion of nationality embedded are the notions of differences in terms of religion, caste, class and region. Emphasizing on ‘difference’ could be one of the ways to resist hegemony or to ascertain the hegemonic position that one holds. In India we have this curious mixture of unified nationality and the perpetuation of differences both in the public and private domains. Marriage is one such establishment that facilitates the interface between the public and private domains, and all the value systems that both these domains hold dear.

Krish Malhotra, a Punjabi from Delhi and Ananya Swaminathan, a Tamil Brahmin from Chennai meet at IIM, Ahmedabad and fall in love with each other. Though the time period is not specified in the novel, going by the indications one could make out that they fall in love sometime during the late 1990s, when there were no mobile phones. The IT boom was just taking shape somewhere in the Indian firmament. And above all, the boys and girls of that time were not just planning to elope for getting married. They wanted to convince their parents of their love and get married with everyone’s consent. To achieve this they needed to go through several trials and tribulations. Chetan’s novel is all about their attempts to win over the warring chieftains of two clans, namely Punjabi clan and the Tamil Brahmin clan.

The micro universe of Krish and Ananya brings forth the macro culture of India; the perennial divide between North and South. The North Indian secretly nurtures some hatred against the South Indians and the South Indians do the same against the North Indian. Before the television revolution and IT revolution, for the North Indians, all the South Indians were just ‘Madrasis’. It is a colonial left over as most of the Southern regions during the British rule were designated as ‘Madras Province’. Even today, for the unmindful middle class, South means ‘Madras’ and a southerner means a ‘Madrasi’. The word ‘Madrasi’, once a term of identification gradually became a term of insult and scorn as it accumulated all the political and cultural strangeness and differences over a period of time (especially during the post independence years). Now nobody would like to be called a ‘Madrasi’ mainly because there is a general feel that the Indian-ness is somehow defined and dominated by the so-called Punjabi culture.

Chetan narrates how Krish gets himself posted at the Citibank division in Chennai in order to impress Ananya’s parents. He wins them over. But he has a strange family back in Delhi, which is complicated not only in terms of dowry demands but also in terms of intra-personal relationships. The story meanders through various interesting incidents that vivisect the hilarious nature of both the communities; the Punjabi and the Tamil. Mutual insults almost sound like the orations of hardcore racists from elsewhere. Chetan underlines the fact that we are still living in a racist society and the only way to overcome the racial prejudices is to encourage interstate marriages.

Humor is Chetan’s tool. Small little sentences encapsulate the human follies in the funniest manner. As an author, Chetan intends a social critique; he aims at the ills of the society, a society that claims to have post-modern mindset but still revels in pre-historic values.

Two interesting faults that I could see are these; a guide in Goa says that Ek Duje Ke Liye is a story of a North Indian boy and a South Indian girl. In fact, the movie is about a South Indian boy and a North Indian girl. In the last section, the birth of twins is presented as a surprise- a bit cinematic. But as we go by the internal clues of narration, we come to know that this couple has got married around 2003. We all know that our medical facilities were sufficient enough to trace the twin embryos during that time. Hence, in normal case the couple should be aware of their ‘twin babies’ before hand. Or is it that the couple did not care to do medical check up during the nine months of pregnancy? One can’t believe that Krish and Ananya doing that.

One should not read Chetan Bhagat for enlightenment literature. His readers come from different strata of the society. They celebrate his works for their clarity and message. It is not the pure pulp, but pulp with the ideas of reformation.

While camping with thirty artists in Daman, I was not reading newspapers or watching television almost for a week. I did not know that Chetan’s latest work had hit the stands. On my return journey to Delhi, at the Mumbai airport I chanced upon this book with red cover that looked like a high school geography text book. I did not think twice to buy one copy as I saw Chetan’s name on the cover. In the airport, I found at least ten people reading it. In the aircraft too, many were seen reading it. In Faridabad, Haryana, where I live, in one of the Reliance outlets in a mall, I found several people at the cash counter, their trolleys filled with Diwali gifts and at least one copy of ‘2 States’.

Finally we have a ‘popular’ writer whose popularity is not depended on controversies. If needed ‘2 States’ has all the ingredients for generating a controversy. But who would like to flaunt one’s own fallacies in public; our purest racist selves?
Posted by JohnyML at 10:54 AM

Hi! I like your in depth review of the book . I finished the book yesterday and loved it. I too attempted reviewing the book but your review is much better. Still if you would care to take a look, here is the link;
http://drvbanerjee.blogspot.com/2009/10/2-states-latest-chetan-bhagat-novel.html

hi... i think chetan bhagat is one indian writer who has caught the pulse of indians.... movies, gods,and cricket etc.,from the ealier subjects he dealt with in his novels. ironically, our dear chetan takes inspiration from bollywood masala itself .i guess rupa n co. is just doing too good a job in making available chetans novels on all book stands.thanks for the latest review. ,i was not going to read it any way..

Sir, read your review.. I am yet to read the book. From your review you look like an AVID reader, would be great if you could post reviews of other books you read.. esp the ones you classify as "enlightenment literature"
best
and on this auspicious day - Happy diwali, and prosperous new year to you.

I have read all your books and find '2 states' second best after 'five point someone' but there are some loopholes or faults in the recent book which i would like to bring to your notice like if ananya topped economics in delhi university, how come she doesn't know anything about Delhiites..plus nor did they ever talk about Delhi, not even once, though they were in there during their graduation period...staying in Delhi for three years must have had taught her a lot of things about the place and the mindsets of the people staying there..
Nonetheless the book is great fun to read and Chetan Bhagat has managed to keep up the standards he had set with 5 point someone..the pace, character sketching and the humour are consistent through out..! had a delightful time reading it.. Good going CB ! :-)

Nice Review. I hardly find anything missed out.

hey. I too grabed the book from delhi airport the nest day of its launch. Good thing is that it is affordable,where in earth do you get a readable book with price tag of two digits!
I being from Madras oops, from chennai and studied and brought up in delhi, I could sense the emotions going in both camps.I wonder how many Krishs get inspired to get Ananyas and make India one nation, Great nation and not just Madrasi,Maharashtra Manoos,Punjabi,Dilliwala,Benagali...............

Good review with plenty of interesting links... can I contact you at delhi? my phone number is 9811560341

DDLJ running to packed houses? If I'm not mistaken, alteast from around 2000, people go to maratha mandir either to make out or to sleep... Where else can u sleep in the A/C for 20rs? Am sure even if they played Jaani Dushman, they'd have the same occupancy... lol!!!