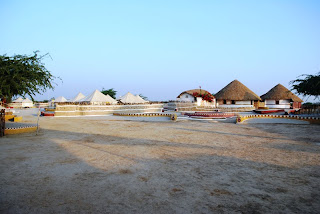 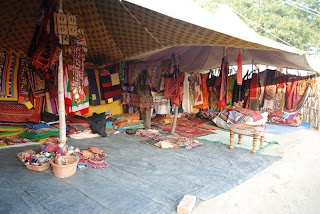 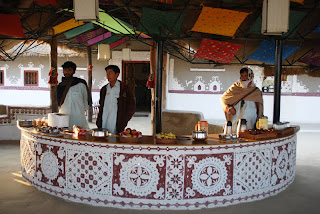 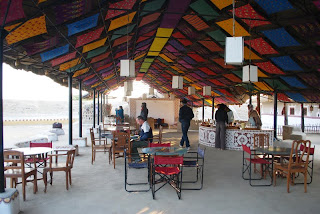 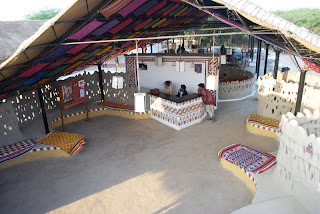 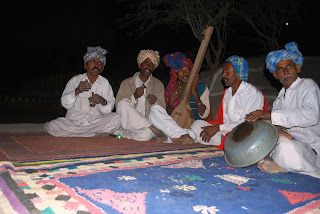 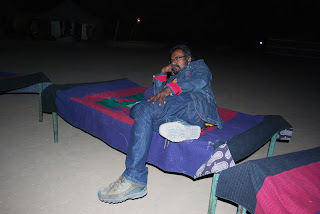 (johnyML at the folk singing session) 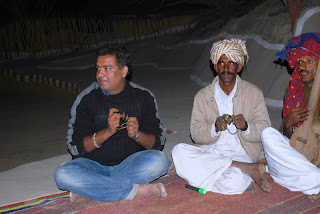 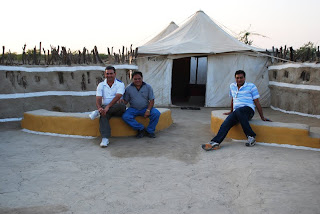 (Asit and Rajesh Shah and Dhruv Patel at Shaam-e-Sarhaad) 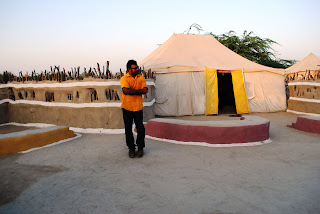 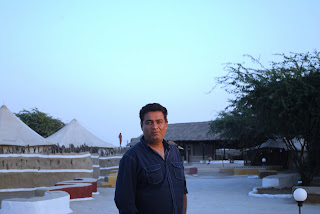 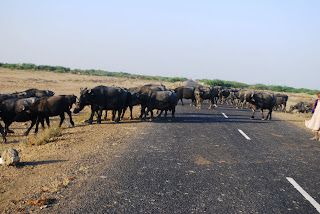 (on the way to Kutch) 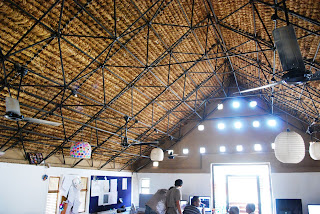 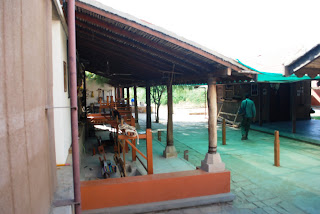 (A work station at Khamir) 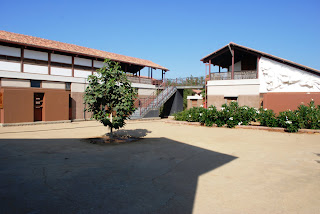 Life seems to be destiny driven. Eight years back I had all the opportunity to visit Bhuj. I remember the date exactly for it was a very memorable day. It was 26th January 2001 and at the Rajpath in New Delhi, India was showing its cultural and military might on the Republic Day.

All India Radio (AIR) news reader, Sushma called me on phone on that day. While talking to her, I found the ceiling fan in my drawing room shaking a bit violently. A sudden feeling of dizziness passed through my brain. Before that feeling of unsettlement was over, I heard the frantic voice of Sushma, “Johny, everything is shaking here.”

In a few minutes everything changed in India dramatically and drastically. The districts of Kutch and Bhuj were completely destroyed by a killer earthquake. What Sushma and I were feeling was the tremors of that destructive earthquake.

I was working with Tehelka.com then as a senior correspondent. Soon I received a call from the office to join that team of reporters that was going to Bhuj. For some reason, I refused to go. I was getting bored of journalism. I was planning to quit.

Today, when I pass through the broad and neat roads of Bhuj and Kutch, I feel the pinch guilt inside me. I should have come here then as a reporter. Today, I am here as an art curator. I am surveying this place for doing an art camp. But I was destined to come here- that’s important for me.

On 18th November 2009 at 5.30 AM, I, Somu Desai, Asit Shah and his associates Rajesh Shah and Dhruv Patel left Baroda for Bhuj. Our destination is Kutch, just at the border where the Rann of Kutch begins. It is a ten hours drive by road. Dhruv and Rajesh are efficient drivers and the Innova picks up speed as we leave the roads of Baroda.

Morbi is a place on the way to Bhuj, one of the industrial centers of Gujarat, where the famous clock brands, Ajanta and Scientific are produced. A mineral rich area, Morbi also has several ceramic and tile factories. You look around and see different brand names of ceramic tiles and ceramic wares. Penguin to Monalisa, Apple to Armani, the international brand names are copied and flaunted with enough spelling mistakes to bring to a smile to your lips. Rejected western commodes become boundary walls here.

Marchel Duchamp would have a field day here.

The roads are very wide and clean. One can step on gas to raise the speed upto 140 kilometers per hour. The earthquake has brought so much of charity and financial investment in this region. One of the major investments is in windmills. Windmill fields are a new area of investment in the power sector.

As an open area with a lot of wind force, these mills produce electricity that makes Gujarat a power donor state. You invest in windmills and you can access electricity from any part of India for a nominal price per unit. Many industrial corporate houses and celebrity individuals have invested in windmills.
Bhuj has a different landscape. The earth is flat and as the salt content is high, the greenery is minimal. The irregular patches of shrubs accentuate the feel of a desert land. There are no high rising buildings. And the villages are in small little clusters where people live in bhungas (small huts). In each plot there are a few bhungas as per the number of members in a family. The individual bhungas assure privacy for the members who seek it.

Khamir Craft Park is one of the important centers in Bhuj. Run by Khamir, an NGO, this place houses crafts from this region. The artisans are given work spaces and the crafts and clothes produced here are distributed to other centers from here. Also Khamir functions as a nodal agency to collect and distribute the craft works produced in this region. The architecture is indigenously developed by Hunnar Shala, an organization works towards sustainable architecture.

Hunnar Shala is located in Bhuj town. Kirtee Bhai Khatri and Kiran Vaghela, architects and researchers in sustainable architecture development, lead this organization. Translated as ‘Talent House’, Hunnar Shala has many young architecture scholars and practitioners in their team. They work from indigenously developed structures, with space framing technology for roofs, paddy for thatch and reinforced mud for walls. Hunnar Shala falls back to the traditional bhunga architecture as a central theme to develop the new methods. They work nationally and internationally in the areas of sustainable architecture development.

Our destination is Shaam-e-Sarhad village resort. Designed by the Hunnar Shala team, this resort is completely built and operated by the village folk in Hodka village at the edge of Rann of Kutch that borders India and Pakistan. There are three bhungas and seven tents with state of the art facilities, but all with a folk touch. Vegetarian Kathiawadi food, folk music and crafts give special effects to Shaam-e-Sarhad.

Shaam-e-Sarhad is supported by Government of India’s Ministry of Tourism and United Nations Development Project (UNDP). Promoted as an endogenous tourism project, this resort came up with technical support of Hunnar Shala after the earthquake in 2001. Now the village boys trained by Hunnar Shala work as reception managers, chefs, room boys and service boys.

When the idea of establishing such a resort came up first, many village elders opposed it fearing the corruption of their village culture. But the youngsters, who were looking for jobs and better lives were all for it. Today the whole of Hodka village support the project and they treat the visitors as their family members.

Four months, beginning from November to Feburary are active months for this resort. Rest of the year, thanks to the acute heat and winds, the resort remains closed. The annual income from the activities is estimated as Rs.24 lakhs. The amount is equally divided for maintenance, salaries and for generating corpus fund. Today this village is self sufficient and education is imparted to the young generation.

A deep silence engulfs you once you are there. Take your cots out and lie on your back and watch the sky up there- billions of starts wink at you from up. The cool breeze embraces you and you don’t feel like talking. You just be there, one with the nature. From a distance you can hear sounds- of a dog barking or a bell ringing- that must be coming several kilometers away.

Here, in this resort we are going to have an art camp. We will be going there with 20 young artists from all over India. And we are going to ask them to produce the works of their choice, inspired or mediated by the atmosphere. One cannot escape this silence and stillness, this vastness and this beauty of barrenness. It is minimal. It is inescapable. It is going to be non-alcoholic.

It is meditation. To be here and look at the setting sun behind nothing but vast expanse of earth is something ethereal.

To be one with nature is a clichéd expression. But you cannot be dual in your mind here.
Posted by JohnyML at 11:06 AM

hi,
as i wrote earlier in my comment, i happened to discover 'by all means....' by chance. And i spent a large part of last Sunday reading your old blogs.... Well, your writing can be quite addictive. i am based in Ahmedabad (work for TOI). it would be a pleasure to meet you (my email id is deep.scribe@gmail.com)

Thanks for these kind words Deep, johnyml

Read it, thanks Johny!